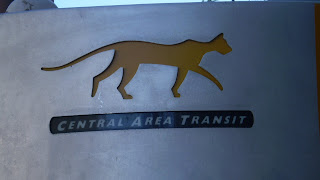 Thank god for WA CATS!
I have just had a week in WA. It was my first visit and it is unlikely I will get back in a hurry as even with cheap airfares and having to pay for just two nights’ accommodation, it put me back about $1,500! The trip gave me the opportunity to catch up with my nephew and a friend from my high school days - neither of whom I had seen for over a decade - and to meet their families. An absolute joy in both cases!

I flew over alone meeting up with my sister there but, as she was attending a conference for much of the time, I explored alone for the first few days. Perth is a logical grid of a city so I found my way around okay and when my legs got weary there was the CAT (central area transit) series of free buses operating in continuous figure eight routes throughout the city every few minutes.

I had one day in Fremantle (nowhere near enough time) which is not so grid-like in layout as Perth and where I meandered around without finding the Arts Centre/Museum for quite a while. Instead I found Fremantle Prison and thought I'd pop in for a squiz but ended up doing a 90 minute guided tour which was both fascinating and poignant. The gaol operated almost continuously for 150 years from the 1850s, first for convicts, later for wartime internees and later still for high-security inmates. Even in its 20thC phase it was harsh and primitive and the thought of prisoners’ long hours in those tiny un-sewered cells and an exercise yard that lacked shelter until 1968 was replete with sad and tragic associations. In the year leading up to its closure prisoners were allowed to decorate their cells (previously forbidden) and the preponderance of Aboriginal motifs and themes testifies to the high proportion of indigenous people locked up there.

Highlights of my trip were:

See pictures of some of this in my Picasa album.
Posted by Alice at 8:20 PM