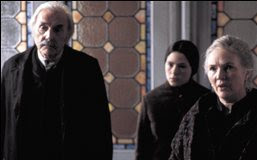 Seeing Eric Sykes as a cadaver in 'The Others' (above) got me all nostalgic.

I lived in St Anne’s, Lancashire for a couple of years when I was a young kid. I always knew that my affection for Morecambe and Wise partly sprang from their north country personae, especially Eric's. (Although it obviously mainly sprang from how bloody funny they were).

It wasn’t until I picked up Eric Sykes’ memoirs in a remaindered bookshop this week that I realised that he too is Lancashire born. There is a funny mixture of innocence and jack-the-lad about both the Lancashire Erics. They make me feel sentimental.

Eric Sykes, like many of the comics of his generation, got his confidence and honed his sense of the absurd in the forces. There has always been a whiff of sadness or resignation about him and when you read that he didn't realise his real mother died giving birth to him until he was five and that he went through his entire childhood cold and hungry, un-hugged and un-kissed, you're surprised it isn't a full blown stench of despair.

I am only up to 1944 and Eric has just experienced fleshly passion for the first time and liberated Germany but the lovely mix of mischief and naivety is there on every page.
Posted by Alice at 9:31 PM

How interesting you are from Lancashire! The SLADEN family comes from Lancashire. 20-year-old Alfred Sladen, school teacher, left the Sladen home in Lancashire (I'm not sure where) in 1861 to take up teaching duties in various NSW towns, finally becoming principal of Watson's Bay Primary. Apparently, he was a despot. I have been to Archives (or whatever it is) and actually read his inked handwriting.

He married a well-to-do daughter of the chief of a bank, and they had three sons. I won't go into their sad history.

Actually I am an
'Essex girl' but I count my years at Lytham-St-Anne's as amongst the happiest in my childhood! I LOVED the Blackpool illuminations