Our weekend has revolved around seeking medical and veterinary attention for our daughter and our rabbit respectively. Thankfully neither has swine flu!

Our bunny, Waldorf, has a torn ear and has been inoculated against myxomatosis and the calicivirus; our daughter has tonsillitis, had a severe migraine and has had a penicillin injection! Waldorf hopped the coop on Friday and was missing in hellish cold rainy weather for hours. We only recovered him, bloody eared, from a neighbour’s garden 5 minutes before the last episode of the US version of ‘Life On Mars’ was shown at 10.30 pm.

He must have squeezed out under the side gate (and grazed his ear in the process) at about 9.15 that morning when I left for work. Then, unbeknown to us, he had roamed the street – being spied by various neighbours throughout the day - and finally made his way to the house over the road (where Lesley came from and where 2 of Lesley’s siblings still roam free) in search of company and a chance to do what bunnies do best.I wondered, if cats have 9 lives, how many do rabbits have? It would have to be fewer I think and he is courting disaster by breaking out like that. My husband took him to the vet for the aforementioned inoculations and to have his ear tended to on Saturday morning

Within about an hour of his return to the bosom of the family our daughter was suffering visual disturbances and searing pain in her head that no kind of analgesia would touch. 1 GP visit and 1 penicillin injection later she was still in great pain and it was RPA Emergency here we come. It was 8.30 pm when her dehydration was finally overcome and the series of painkillers I’d administered earlier kicked in. My husband went in search of fish and chips which was what she fancied after eating virtually nothing all day. We consumed them while ‘Mr Blandings Buil(t) His Dream House’ (on ABC2) for the umpteenth time! Today she is feeling much better and Waldorf has been hiding under the house all day in protest at our curtailing his love life.

Shame about the ending of the ‘Life On Mars’ – although not in the same league as its British inspiration we had been enjoying it. The dénouement was extremely silly. You had to feel for the actors neatly and sentimentally making twee sense of the series engagingly implausible premise. I am no enemy of the pun, but 'this is going to be one successful gene hunt'! Pulease! 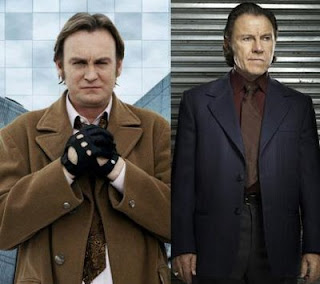 Philip Glenister and Harvey Keitel (UK and US Gene Hunt respectively) look disappointed in the final episode of the US version of Life On Mars which was all wrapped up too cutely.

hai your blog is very nice

Why thank you, so is Barcelona.

Your poor daughter. That would scare me.

I had a scratched cornea from contact lenses on Tuesday 9 June at 3 am, and drove to RPA emergency. After waiting 45 minutes (only 2 people ahead of me, but they weren't attended to in that time) I just drove off. (Lack of parking is another issue alltogether). Such a quality medical experience we are offered in this area.

Your poor bunny! Why don't you arrange a date for the bunnies? Like a sleepover. Hey, I'd be furious too, if I'd been prevented from .......

Can you please advise the ending of the UK version of Life on Mars? I think the British ending was that he committed suicide because he was still living in the seventies in his mind, and having been cured, he wasn't interested in living in the present day. Or did I get it wrong?

Hi Friend G, do you really want to know? Turns out they ARE traveling to Mars to look for signs of life, hence the 'gene hunt' pun. Harvey Keitel is called 'Major Tom' and is Sam Tyler's DAD!!! To use an expression from our children's generation 'it is LAME'. A firnd of mine posited that they heard they'd been axed and said 'Now how can we get out of this?' 'Hey, how about...'.

A 'sleepover'? We'd have to catch the neighbours' feral rabbits first! Then I doubt there'd be much sleeping...