No saccharine for me!

I am not diabetic. I know because I had a glucose tolerance test at the weekend. A dear friend pointed out that I must be relieved to know that I am overweight completely as a result of greed and not any kind of imbalance! Of course I am; now I know that all I have to fall back on is my willpower (or a non-existent entity as I prefer to think of it).

The Eurovision Song Contest was a huge disappointment this year. I rely on it to provide me with endless cheap laughs at the expense of the gauche and tacky acts it generally showcases. Well, blow me down if most of them weren’t fairly ordinary and inoffensive. The only ripple of delight in the time I stayed with the broadcast came from the larger than life appearance and lack of musicality of one of the Israeli entrants (she was like an unflattering caricature of Paul Capsis in drag!) It was mild in comparison to the paroxysms of laughter I have experienced in past years. Globalisation has a lot to answer for! 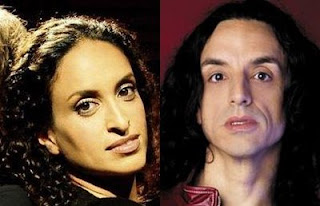 Separated at birth?
Post script to my Perth visit: daylight saving has been defeated in the 4th (?) referendum on the subject and a Green candidate has unseated Labor in Fremantle after they had held the seat for some 80 years! I took an interest in these news items having been in WA so recently. Apparently the Fremantle outcome was the result of a protest vote where the only alternative to the incumbents on offer was the Greens; the Liberals didn’t field a candidate for some reason. Two of my hosts while I was in Perth explained why most Westralians don’t want daylight saving. One said they already have ample daylight all year ‘round and putting the clocks forward stuffs up early morning swimming and crayfish pot checking. The other said they’ll be damned if they do something just because the eastern states do. I suspect both are true.
Posted by Alice at 9:21 PM