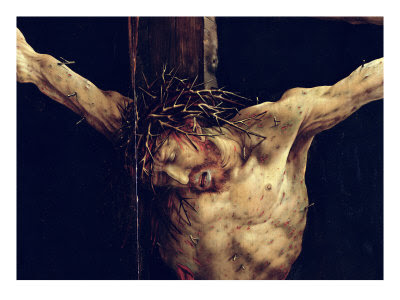 The ultimate depiction of the crucifixion as sheer human suffering - Matthias Grünewald's Isenheim Altarpiece
Well, of course, Easter is a weird conglomeration of Christian martyrdom/sacrifice mythology cobbled together with pagan fertility rites and CHOCOLATE! So basically something for everyone! Chocolate will never be irrelevant but reproduction (at a personal level) is for me now. The Christian story still has the power to move me amazingly. Last night I listened to something sublime called Gesualdo's Responsoria Feria Sexta and today I heard music by 7 different composers interspersed with texts by 7 different poets read by Sir Peter Peers all based on the 7 purported last statements uttered by Christ on the cross (known as the "seven last words"). Donne and Sitwell were standouts but I loved it all. I found myself in (very rare) agreement with Peter Jensen that creeping (I think he used a different word) secularism means it is somehow these days not quite proper to be familiar with biblical stories or to absorb the dignity and beauty of such images and messages. I am a card carrying atheist but I would never deny the poignancy and nobility of the Christian myth and the rich emotions of betrayal, sacrifice, suffering and transcendence the Easter story embodies. It has also inspired some pretty good tunes and pomes!

Our rabbit Waldorf appears to have been doing quite a bit of freelance modelling behind our backs. He is in Natalie Ambruglia's arms on page 16 of this weekend's Good Weekend magazine and was in DJ's Easter Treats feature in last weekend's edition of the same magazine! It is quite nice owning a cute bunny at Easter - feels like it gives you some inside running! We have enjoyed our fair share of chocolate already as my sister gave my husband a box of Adora's handmade choccies for his birthday last weekend and we have been steadily nibbling our way through them.

I have just read that the ever irreverent and politically flamboyant John Saffran had himself nailed to a cross in the Philippines yesterday for an upcoming ABC TV series. It is his prerogative as a Jew, a satirist and a curious human being to do so. I am keen to see how he uses the experience in his program.
Posted by Alice at 7:08 PM