Leader and the (dying) Swan 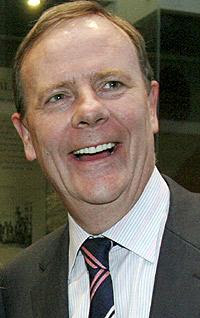 CAPTION CONTEST - Boolomo wins with his tribute to Eric Morecambe: 'Gottle o'geer'
Get Peter Costello! Is he going to hang about endlessly on the whiff of a chance that a delegation of desperate Liberals will come to him one day soon and simply beg him to stand as leader? How much credibility is he going to have any way after frittering away the time and opportunities he has over the past few years? I thought he had some well heeled consultancy role or Board membership to go to in the private sector but here he is still clogging up the newspaper pages over a year after he eschewed the Howard anointing! The picture above appeared in the SMH on Saturday (I can't say in what connection as domestic issues - and I mean really domestic issues - prevented me from reading the paper this weekend, as they do most). Is it an old picture or has he been Jenny Craiging? Any way it has his hallmark smirk albeit mediated through some rather unsubtle dental enhancement. Suggested captions please!

I never used to mind Malcolm Turnbull all that much. He was never warm or profound but he seemed reasonably sensible and intelligent, his current reactionary populist posturing is just cringeworthy!

I have to go now because 'Lie To Me' is on, but watch this space for more musings on telly, shopping, raising teenagers and the wonderful workings of the bureaucracy soon!

POST SCRIPT: He's ahead of Malcolm in the polls, looks like he is waiting to be cast in the role of selfless saviour!