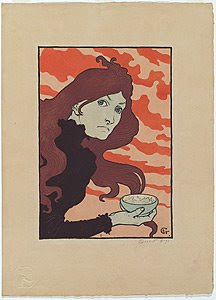 I've covered a bit of territory in the past 3 days! Berrima for 'Prisoners in Arcady', Canberra for 'Degas' and some of his contemporaries, Target in Civic for suitable clothing* for my daughter to wear in Canberra climes, Yass for bric-a-brac, the AGNSW for the Archibald and Art Express and the psychologiost for my workers' comp assessment! I was not disappointed by any of them.


While Grosset's 'La Vitrioleuse' / 'The Acid Thrower' (above)
may depict my mood for many of the past few weeks, even months, I am feeling a little more positive today. Suffice to say I am optimistic that the unbearable situation at work is over.

'Prisoners in Arcady' is a wonderful exhibition at the neat as a pin Berima Museum complete with archival photographs, newspaper clippings and propaganda footage about German mariners and farmers interned in Berrima gaol during WWI. These men - who were only confined during the night hours - created their own idyll on the banks of the Wingecaribee River by day raising crops, keeping ducks, canoeing & kayaking (one of their craft is on display!), building Bavarian-style chalets and even opening a playhouse and performing touching melodramas! The exhibition was a revelation and the volunteer guide a well informed and engaging man. The Southern Highlands On-line site states that 'Sadly there are currently no reviews for Berrima Museum' - I will be rectifying that!

I had forgotten, or perhaps not really ever fully appreciated, what a very versatile and adventurous artist Edgar Degas was. We (and 3,997 others according to an ABC news report I heard later) visited the National Gallery exhibition yesterday (Sunday 15th March) and encountered his etchings and other prints for the first time. The images of Mary Cassatt and her sister at the Louvre particularly captivated me. The caption writer got it right. Mary is depicted as a thoroughly modern and self assured woman inspecting antiquity with an artist's eye & mind - all suggested just by her posture and the angle of her parasol.

Got home in time to see the concluding part of 'Lost In Austen' which has been a sheer delight and, to borrow from its script, a very witty and sophisticated 'post-modern moment' (or series of) moments from start to finish. Can't heap enough praise on all the performances!

*Neglectful mother that I am I let her pack shorts and a sleeveless T-shirt for the trip. She now has a purple hoodie to match her fringe and various other pertinent additions to her wardrobe including a T-shirt depicting Degas' Little Dancer.
Posted by Alice at 9:35 PM