A few weeks ago I did some rather drastic gardening, clearing out an area that was choked with weeds in an effort to access the rain water tank we’ve never used and to get a clear view of Willans Hill from our kitchen window. Something stung or pierced my right forearm that day and it has been intermittently itchy ever since. I am used to healing more slowly as I age but I still have a rough red itchy patch that hasn’t completely cleared up. I forgot to mention it to the doctor when I saw him a few days ago for our ultimate consultation (he and his partner, both GPs, are following the well-established trend of rural GPs departing for Sydney). I am wondering if a plant fibre or insect ‘bit’ has penetrated my skin. I suppose it will either work its way out over time or enter my blood stream and kill me. My great Aunt Hannah died of a bite (either redback or scorpion, depending upon which account you read) sustained while gardening in Chatswood so there is a family precedent for such a catastrophe. I am choosing to process my itch in a more metaphorical way though…

We’ve lived in Wagga Wagga for  seven years now. Could I be experiencing the itch that comes with that passage of time? In December 2015 I blogged about moving here. Rereading that post, it is positive about relocating, but it isn’t quite the paean to Wagga I remembered it as being. I remarked on ‘what I miss and what I welcome’ in my new environment, showing that, one year on, I was mindful of both. I knew the day would come when I was more familiar with Riverina people, locations and place names than I was with those I’d left behind. Although a trivia quiz at the recent  ‘Aqua Chicks’ Christmas party revealed my poor grasp of Wagga street names and of their family connections to various ‘chicks’. I had learnt about architect Steve O’Halloran’s legacy (he designed the Civic Theatre and is the father of an impressive  patrician aqua ‘chick’ who recited Mulga Bill’s Bicycle at the party).  I have researched the artistic hub that was the Wagga Wagga Teachers’ College (one of the teachers there, Lionel Gailor, entered his mural designs in the Sulman art prize competition in 1953 and students submitted the design for the podium for ER II’s 1954 visit to Wagga). The fast flowing Murrumbidgee and its gnarled sentinel gums still delight me, spreading development  means that we see fewer kangaroos than we did in our first year. I do now frequently bump into people I know when I am out something I craved I when I wrote that 2015 post. The passage of seven years, two of them without the option to travel, courtesy of COVID, has made me restless for occasional changes of scenery. A friend and I were poised to go to NYC and I had just got my first Australian passport when the pandemic hit. While writing this I have been able to make a flying visit to Sydney, which could be the subject of a complete other pluses and minuses post, but did mean I could see our son and catch up with friends.

Most things about the tree change have been completely positive: part-time work in a congenial atmosphere, learning how not to kill plants in this soil and climate,  walking our dog Stella in the delightful Botanic Gardens and finding joy in the Booranga writers’ and book groups. I am used to sharing the house with a few dozen daddy longlegs and will never take our view for granted. I could do without the angle of the driveway (I have meniscus tears in both my knees) and I foolishly thought a modern (1970s) house would be easier to maintain than our previous Victorian and early 20th century residences. It isn’t and we aren’t getting any younger.

While my affection for the Riverina’s endemic gums never dims, I realise my appreciation for the enormous eucalypt in our front yard was naïve. An arborist has told us that it is not native to the Riverina but to Western Australia and suited to that dry climate. The species was chosen by local gardeners for its quick growth however its location here in a heavier rainfall region and beside our fish pond means it leaches moisture from its surrounds and has grown dangerously large, threatening to drop its substantial branches at any time. We are waiting for said arborists to make good on (i.e. not cancel at the last minute) their fourth appointment to prune the monster! 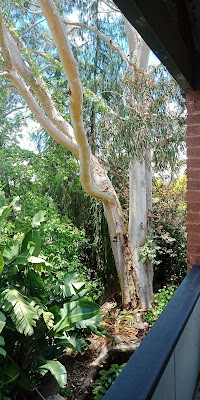 On the subject of the pond, I think I have blogged before about its maintenance requirements and how two goldfish have spawned a clan of over forty! The sight of those swirling  tangerine shoals and of little fish mouths piercing the water’s surface begging for  pellets has its own aesthetic but the banjo frogs that used to serenade us each evening have been silenced. I have seen the piscine ruffians scoffing frogspawn and even tearing apart a live frog. I am now trying to figure out a way to restore the native pond life. I’m going to ring the zoo and see if they want some gold fish – I have given away dozens in the past. 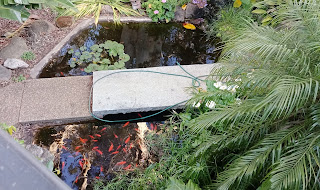 In other aquatic news, there is now, again COVID instigated, a ceiling on numbers for aquarobics classes and I am seldom quick enough to secure a spot so my established regime is disrupted. I have bought an exercise bike but it has not won my allegiance in quite the same way. It will soon be hot enough to choreograph my own routines in our (unheated) pool, in the meantime I need to ‘get on me bike’ and generally think laterally about alternative forms of exercise.

That is if I don’t succumb to great Aunt Hannah’s fate!

Balm for the soul (and the itch) - Wagga's Botanic Gardens
Note: all my photos.
Posted by Alice at 1:14 PM