Myrtle[1] is the name of a life sized nineteenth century bronze statue that stands in a non-descript area of Charles Sturt University’s Wagga Wagga campus. She is not the first nineteenth century female bronze I have encountered since moving to Wagga in 2014. That was a spelter art nouveau dancer discovered in an even more unexpected location, amidst car parts and man cave accessories at the Wagga Wagga Swap Meet!  We needed something to populate the plaster niche in our eclectic new home and I am a long standing fan of art nouveau. She was perfect, reasonably priced, and came home to our niche where she has been ever since. 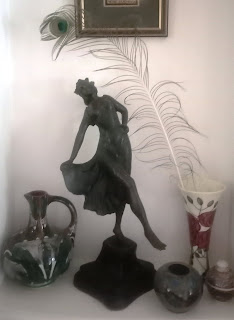 Myrtle we encountered not long afterwards. She is not art nouveau, more classical, clad in drapey robes, one breast bared, holding aloft a torch and clutching a botanical specimen in her right hand. Her exact location is beside the Tabbita Walk on CSU’s north campus close to a student accommodation block and a pair of dumpsters. She is perched upon a metal plinth significantly eroded at one corner by dog urine and a plaque on her base proclaims in a stylised font that would threaten to upstage her were it not so tarnished:

the Wagga Wagga Chamber of Commerce in 1954

she graced the lawn in front of the 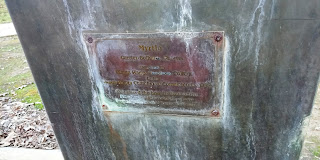 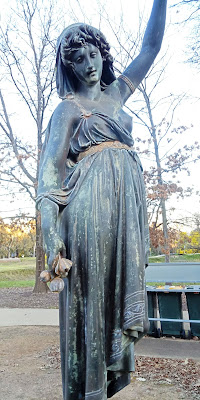 Myrtle and a glimpse of  the dumpsters (my photo 2021)

While it was serendipitous to find the only art nouveau objet d’art at the Wagga Swap Meet, it was downright puzzling to find a statue by acclaimed  nineteenth century French sculptor, Albert-Ernest Carrier-Belleuse (1824 - 1887) in the middle of CSU’s expansive campus in the company of those dumpsters and approximately 100 metres away from a lonely unused bandstand. It was the bandstand that led me to Myrtle. My obsession with rotundas and bandstands dates back to my childhood playing in a neglected one in Valentine’s Park, Ilford, Essex (see my blog post Strike Up the Band Once More). It turns out that Myrtle and the bandstand have some shared provenance, but that is for another post.

The man who created Myrtle, Albert-Ernest Carrier-Belleuse,  had a highly successful career in France and Britain producing major works like his marble La Bacchante (1863), purchased by Emperor Napoleon III for the Jardins des Tuileries, and his portraits of cultural icons Rembrandt (1880) and Dumas (c.1883-87) as well as creating prototypes for multiple castings, usually on allegorical or mythological themes, for manufacture by British companies Minton and Wedgwood. His works are in the Metropolitan Museum of Modern Art in the USA, the San Martín Cathedral in  Buenos Aires and in our own National Gallery.

How, I wondered did one of his sculptures come to be gifted to Wagga Wagga Teachers’ College in 1954? How did that statue then wind up on the campus of Charles Sturt University? Pondering these questions led me to speculation, trawling TROVE, posting an enquiry on Facebook, and, ultimately, to the research findings of CSU archivist Jillian Kohlhagen and CSU art curator Dr Tom Middlemost. Here is what I discovered.

As the plaque states, Myrtle was acquired on behalf of the thriving local Teachers’ College in 1954. Her purchase was announced in The Daily Advertiser of 29 April 1954[2] as follows:

The Wagga Teachers’ college were granted a £25 donation and an interest free loan of £75 to cover the cost and erection of bronze statuary outside the college. The statuary is by well-known Australian (sic) sculptor A. Carrier. The college plans to illuminate the statue and install a plaque at the base.

Unless The Advertiser was mistaken about the purchase arrangements as well as the sculptor’s nationality, it appears that initially at least Myrtle was not an outright gift. Maybe the Chamber of Commerce waived the debt later. Other editions of The Advertiser from the period reveal that Myrtle was joining an impressive art collection the college was amassing. However, she is stylistically at odds with the modernist flavour of the college’s other acquisitions.  In its catalogue of artists featured in their collection,[3] the National Gallery of Australia dubs Carrier-Belleuse’s style ‘voluptuous antiquity’, an apt description of Myrtle given her classical garb, sinuous lines and semi-nudity. Other pieces the college bought or was gifted during the 1950s include a watercolour and 3 lithographs by Frank Hinder, a series of pen and wash drawings by Roy Delgarno[4] and 12 oils by Herbert Gallop.[5] Hinder is an abstractionist, Delgarno, a social realist and Gallop produced landscapes that evoke the Heidelberg school but also the travel poster and pub art of the 1940s. 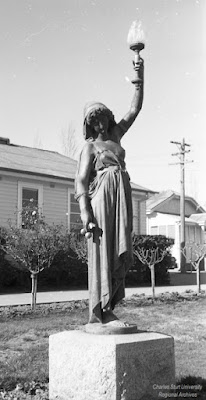 Myrtle in situ in the formal gardens in front of the administration block, (Source: CSU Archives)

Myrtle is signed ‘A. Carrier’, like all  his pre-1864 pieces, so she likely dates from the 1850s which means she was perhaps 100 years old or more when she came to reside in Wagga. Was she found in a local antique shop? If she came from Sydney or Melbourne, how, in those pre-internet days, did her availability become known to Riverina customers?  What influenced the college’s choice? Was it her European artistic pedigree or her allegorical qualities? Did her lantern–bearing pose suggest the illumination provided by a place of learning? Was she just an attractive bargain? Once installed on her concrete plinth in the college gardens, amongst rose and myrtle bushes (‘hence her name’), her attractiveness to some of the students became apparent.  As archivist Jillian Kohlhagen puts it ‘certain students… took to polishing her exposed anatomy’. Or to quote a graduate of the college, Mavis Lupton, reminiscing about her student days in the Lost Wagga Wagga Facebook group, ‘In 1962 – 63 - I remember some of the boys polished Myrtle’s exposed breast’. [6]

The Wagga Wagga Teachers’ College was established in 1947 to meet a state-wide post-war need for teachers. It wasn’t the first Teachers’ College in Wagga – there had been a more modest one on Copland’s ‘Hillside’ Estate on Willans Hill founded in 1928[7] The new college was almost built on part of the showground, but a former RAAF hospital site in the nearby suburb of Turvey Park won out. It was the first wholly residential co-educational tertiary institution in Australia and early intakes included ex-military and mature aged students. The campus buildings were linked by intersecting covered walkways and set amongst impressive grounds conceived by the Chief Landscape Gardener of the Department of Agriculture , Ezra Steenbohm and realised  by Lucas Schatte, described in The Advertiser[8] as ‘former Royal gardener to King Peter of Yugoslavia’. The college’s tiered and trellised ‘Pleasance’ incorporated an ornamental fishpond and another bronze, a miniature Naied, by contemporary English sculptor Katherine Murray-Jardine. Its whereabouts today can only be guessed at.  Maybe I will happen upon it in my wanderings.

Female students beside the fishpond and the miniature Naied
in the Pleasance (Source: The Wagga Advertiser, 8 October 1954)

The Teachers’ College closed in 1971 and became part of the Riverina College of Advanced Education which then merged with CSU in 1986. The old college buildings and grounds have long since fallen into disuse and there is no trace of any rose or myrtle bushes on the site. The CSU Archives now house the college’s art collection in a Brutalist-style building at the old college location shared with the Riverina Conservatorium. In the past two years a new housing estate has sprung up adjacent to the old campus.  In 2018 it was announced that the Conservatorium is destined for new accommodation on Simmons Street beside the Wollundry Lagoon. I am not sure where the Archives are headed but as the H.R Gallop Gallery is already situated on the CSU campus I suppose they may be joining it.

In the 1950s and 60s Myrtle stood, an idealised beauty, serene and impassive, shining her lamp over manicured gardens and enduring the irreverent, if affectionate, attentions of young male students. However, she vanished from the grounds some ten years before the college closed. Sad students wreathed her empty plinth with flowers and left a poignant sign there lamenting her disappearance. Rumour has it that the Principal, Maurice Hale, thought the constant attention to her anatomy was ruining the statue’s patina and another, associated, theory was that the sun reflecting on her polished surface, shone directly into his office[9].  She went to ground until she was re-erected in her present location.

Dr Tom Middlemost, CSU’s Art Curator, has delved into her origins and discovered that Myrtle is in fact one of a pair of bronze ‘torchere-holders’, originally designed to support gilded candelabra, representing Night and Day.[10] Myrtle, whose head is draped and who holds sleep-inducing poppies in her right hand, is Night, her companion Day is bareheaded and with braided hair[11]. Carrier-Belleuse produced numerous similar figures throughout his life, usually as adornments to grand public buildings. It seems safe to assume no others found their way to a rural Australian university. 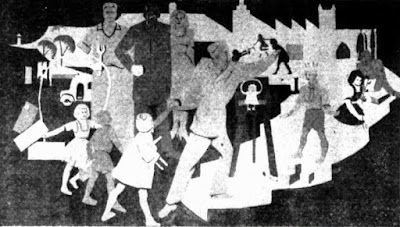 One of the three Lionel Gailor murals entered in the Sulman art prize competition in 1953
(Source: The Wagga Wagga Advertiser 5 March 1953)

I am still intrigued to know what drove the Chamber of Commerce and the Teachers’ College to select Night/Myrtle for her place of prominence on the campus and wonder if the burnishment she endured at student hands might not have been predicted.  Her whereabouts during her temporary retirement would also be interesting to discover. I am, however, very glad she’s back on view and we know a little more about her history. Now to investigate the fate of Murray-Jardine’s small bronze Naied and of the three Lionel Gailor murals [12]depicting the progress of the Wagga district, the history of education, the life of the college[13] that once adorned the college’s Assembly Hall and were considered worthy of entry into the Sulman prize art competition. Oh, and to find out more about the bandstand of course.

ohlhagen's excellent CSU Archive blog post For the Love of Myrtle and from a conversation with Dr Tom Middlemost. Those sources are acknowledged and I extend my thanks to both of them.