Time was when most country towns had a local department store, usually a family owned business that had grown to meet the community’s consumer needs. These days Knights and Hunters on the Hill seem to be the only extant home grown retailers. Both businesses are now shadows of their former selves.  A bit of research proves that Wagga once had many more thriving local businesses.  The Museum of the Riverina did more than a bit of research to produce their recent pair of exhibitions: Huthwaite’s the Friendly Store and Made in Wagga. 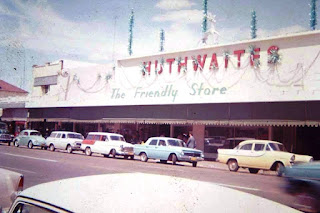 Huthwaites in the 1960s (photo source: Lost Wagga Wagga Facebook Group page)
The latter is a recreation of the an exhibition from 1999, the year the City Council took over the running of the museum from the local historical society. Made in Wagga comprises stories and artefacts from Wagga’s history, identities, industries and businesses that showcase the once vibrant and thriving commercial culture of the city.

Amongst the industries and entrepreneurs featured are:

Information about Wagga's condiment king from the exhibition - my photo

Something of a surprise amongst all the commercial and industrial exhibits is Maure Kramer’s 1976 prize winning Crabcycle Gumi boat (revived for the 2004 race). However it certainly fits the description ‘made in Wagga’ and its presence adds to the general diversity and nostalgia of the exhibition. 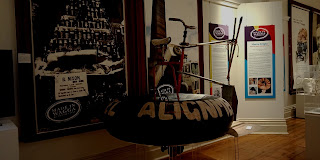 The highlight of these two-exhibitions-in-one was the presentation of the history of Huthwaite’s department store. The collection of items, imagery and reminiscences about  the store which operated in Wagga for 75 years, is rich and varied. It included informative audio visual presentations and a wealth of photographs and objects including a delivery bicycle and original carrier bags and advertising material. 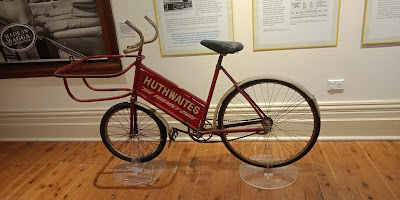 One shortcoming of the exhibition was the lack of information provided about the content of the two videos – when I visited I had to ask a staff member a number of questions about who was speaking/ being interviewed.  The staff, as they always are, were very helpful and I have since discovered that a number of fact sheets relating to the Museum’s collection, including these two exhibitions, is available online: https://museumriverina.com.au/education/schools/facts-sheets 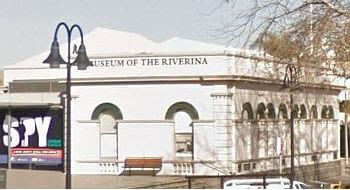 The Museum of the Riverina has two locations - these exhibitions were at the old Council Chambers site on Baylis Street (photo source: https://threebestrated.com.au/landmarks-in-wagga-wagga-nsw)
Posted by Alice at 4:30 PM