Tom Moore is one of Australia’s pre-eminent glass artists, and probably our most innovative. His retrospective exhibition, Abundant Wonder, currently showing at the National Glass Gallery, Wagga Wagga is a cornucopia of sinuous, whimsical objects showcasing  this talented artist at the peak of his powers.

This touring exhibition, commissioned by Adelaide’s Jam Factory in 2020, is the culmination of over 20 years practice and features hundreds of individual and tableau-style pieces.  It is a  technical tour de force that is also visually enchanting and provoking, humorous and disturbing.

In a 2016 interview Moore said that his work is ‘trying to make sense of a complicated and nonsensical world’.  In doing so he repeatedly returns to the theme of  ‘human-initiated environmental damage’  through mutant figures, half machine, half animal, lush vegetable forms sprouting eyes, potato-like disembodied heads in a cabinet of curiosities and sea creatures out of their element. 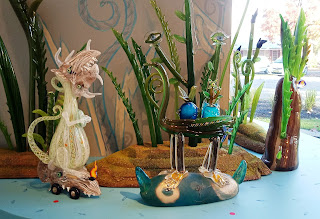 Despite their apparent organic spontaneity Moore’s objects are based on detailed drawings and are wrought through highly challenging techniques. The artist and commentators have noted the paradox of creating objects of such writhing vitality out of the rigidity of cooled glass.  Moore’s inspiration is eclectic, there is a clear evocation of pop art, think the Beatles’  'Yellow Submarine',  Reg Mombasa’s  Mambo imagery, Nickelodeon’s 'Real Monsters', Tim Burton... Two avowed influences are the drawings of nonsense poet, Edward Lear and the capriccio glass vessels of 13thC Venice. 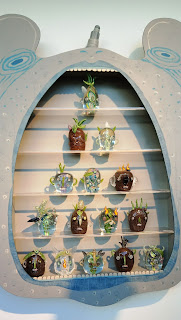 Many of Moore’s creations are distinctly Australian in their inspiration, kangaroos with other kangaroos as heads, both roos and koalas emblazoned with lit matches, a semitrailer carrying a hammerhead shark. Re-imagined dinosaurs feature prominently too, many with tiny appended wheels that would buckle under  their ‘real life’ weight.   More playfulness with his materials! Every fabrication is simultaneously both delightfully amusing and expressive of  his deeper concern for the planet under threat. 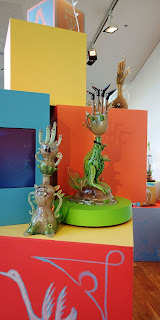 The  theatricality and dynamic qualities of Moore’s work makes it ripe for  animation and a major component of the exhibition is the digitally created videos depicting his hybrid creatures in fantasy landscapes blinking, flying,  spinning, consuming one another and even exploding – his favourite effect!

All this richness  and grotesquery is displayed  in the reassuringly familiar setting of cubby houses and puppet show  booths, storybook illustrations and  alphabet blocks. Thus we are soothed and beguiled only to be confronted and disturbed.

Do see Abundant Wonder. It is in Wagga Wagga until 4 July then travelling to Victoria, Queensland and South Australia. For details visit: https://www.mooreismore.com/abundant-wonder-exhibition-and-tour/