The Doug Anthony All Stars had fun with the name ‘Uranquinty’ when they came to Wagga. I checked, ‘Uranquinty’ is indigenous; it means yellow box tree and plenty of rain. These days Uranquinty’s average rainfall is about the same as the rest of the Riverina’s but maybe it was remarkable a few thousand years ago. The yellow box tree is a slow-growing, spreading eucalypt with yellowish tinged bark that shreds in ribbons. According to Landcare, it thrives in ‘light to heavy well-drained moist soils but ’resents high water tables’.  Again, did it enjoy more of a drink back in the day? 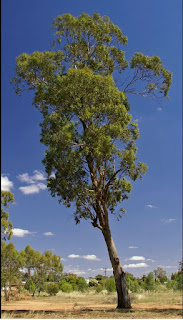 Then there is the association with the 2001 musical, ‘Urinetown’ which I haven’t seen but, as it is described as a witty post-Brechtian satire on disaster capitalism,  it would undoubtedly be just my cup of diuretic tea.

It would be crass to dwell on these cross-linguistic homonyms were it not for the fact that at least some amongst the town’s roughly 900 residents find lavatories and drainage a source of great civic pride. This is evinced by pages on their promotional website ‘Uranquinty the Friendly Village’ and ‘Visiting Uranquinty’ which between them feature five images related to public toilets and waste disposal: two images of the toilet block in the rest area, two images of  art work on the wall of said toilet block, and an image of the grey and black water disposal facility. These pictures are given prominence and, unlike photographs of the cenotaph, roll of honour, RAAF memorial and statue commemorating immigrant women and children, are displayed the right way up! 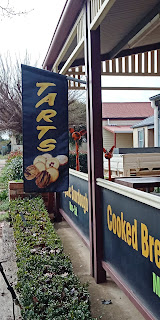 A good investigative blogger does not rely only on secondary sources and old DAA jokes, she goes to the source – especially if the source has one of the region’s best bakeries! So I recently made my fifth visit to Quinty, as the locals call it. Despite two days without rain, the gutter outside the Quinty Bakehouse was awash - spooky! Having applied hand sanitiser and availed ourselves of different entry and exit points, we took our coffee and two of the tarts spruiked on their ample signage opposite to Wirraway Park. This ‘popular rest stop and play area right on the Olympic Highway’ (Wagga Wagga Council website) features all of the above mentioned monuments and 10 life-sized cow cut-outs made from hand-forged solid flatbar steel by artist Jane Cavanaugh. The cows are fun, juxtaposed nicely and good for teasing the dog. They also light up at night. 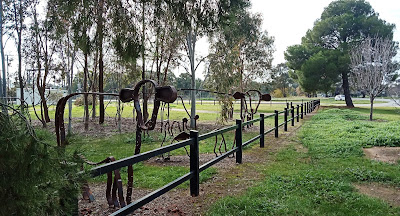 I’ve lived in the Riverina for five and a half years now but I still behave like a tourist reading every plaque, inspecting all public art and commemorative installations, researching the area’s history and taking lots of photos. So I checked out the simple cenotaph and granite plaque commemorating locals who served and fell in World Wars 1 and 2 respectively. For such a small town, Quinty made a huge contribution to the forces in the latter conflict. In a chicken and egg conundrum I haven’t been able to determine if that is because an RAAF training school and fuel depot were located here, or vice versa.

I was surprised and pleased to see Canny Kinlock‘s sculpture of a woman, with her two children and suitcase, representing refugee families offered  a home in one of Uranquinty’s disused army and air force camps in the late 40s and early 50s, their men folk often working as labourers on the Snowy Mountains hydro scheme. 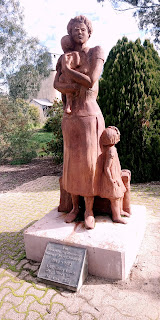 But all that is on the public record. I sought the public toilets. Our coffees did their work and it was time to inspect these facilities.  Inescapable on approach is the bright blue plastic lidded ‘Dump-Ezy’ tank. Resembling a children’s paddling pool or sand pit, though one hopes it is never mistaken for either, it is labelled  a ’dump point’ for the ‘disposal of black and grey water’ from RVs and caravans. Grey nomads, for whom my spouse and I are sometimes mistaken, pass this way often and take the opportunity to download, so to speak.  I know about ‘grey’ water, we use it on the garden, but ‘black’ water I had to look up. Ah, it is the liquid that comes from flushing the toilet in mobile homes it ‘contains the pathogens of faeces and the nutrients of urine … diluted (by) flush water’.  Put like that is seems crime to harbour it – or to waste it!

The ‘dump point’ does tend to dominate the view which is a shame as a framed photograph of the toilet block on the wall of the toilet block (a bit meta that) features a caption in texta drawing attention to the fact that ‘the toilet block is made to blend in with the silos at the back’, an idea ‘suggested by Elaine Mortimer’ and realised ‘by locals’. 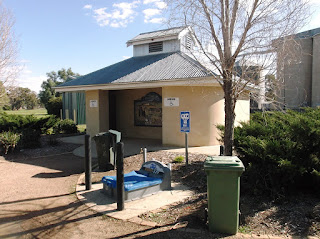 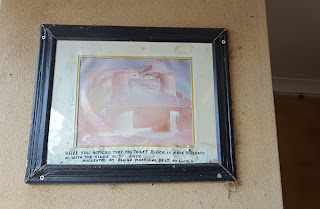 Our historical and aesthetic education continued even further as we entered the conveniences. Front and centre is an unattributed mosaic depicting the (European) history of Quinty including the growing and cartage of crops, the pleasures of being a smocked figure sitting in the fields (although this could be a trio of scarecrows), two small planes looking as if they are about to engage in a dog fight and a glimpse of the formidable silos. Most prominent of course is the pub! Fair enough, it is one of only half a dozen functioning businesses in the town, is a nice arts and crafts influenced design and has probably contributed a fair number of users to these facilities. 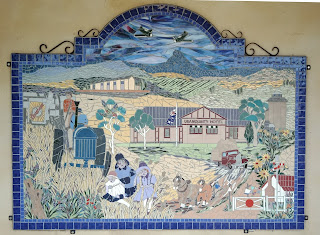 Thinking I was unlikely to ‘squeeze’ any further ‘drops’ of blog material out of this visit, imagine my delight on opening the cubicle door to yet greater evidence of Quinty’s joy in all things lavatorial! 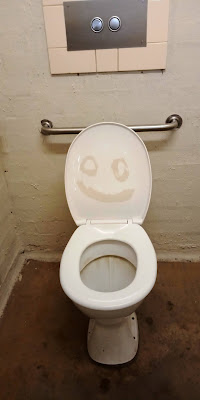 Note: All photographs are mine except for Yellow Box Tree, Wagga source: Wikipedia and Unranqunity public toilet block source: Google Maps
Posted by Alice at 9:09 PM

Hi. Just stopped by as I and a friend were reminiscing about Valentines Park in Ilford and your exploration of bandstands came up. He remembers there being a performance, but I don't.

However, I also think I remember the roof having to be taken down as it was damaged in a storm and the bandstand being ringed with roses like the top tier of a wedding cake.

The subject came up because of shelter by the lake being restored restored a few years ago and a catalogue of the war memorials, of which the shelter is one.

The memorial is also listed by the Imperial War Museum and has a separate entry as they are most interested in the tablet raised to his memory.

I know this comment related to my Valentines Park/Bandstands post but I pressed 'Publish' and it popped up here. Thank you 'Woman On A Raft' Valentine's Prak holds a special place in my heart - I am delighted to learn more about the old shelter.

The shelter looks great. I look forward to being able to visit Valentines Park again one day. Thank you for your comments, 'Woman on a Raft'.