Rabbits are not native to Australia but, along with other European pests, arrived by ship in 1788. Within 50 years they were endemic.

In January 1912 Mr James McGrory of Willarma Station near Yass claimed in a report published in the Hillston Spectator & Lachlan River Advertiser that he had poisoned and collected the corpses of 5000 rabbits in one night, he volunteered three witnesses in case readers disbelieved him. 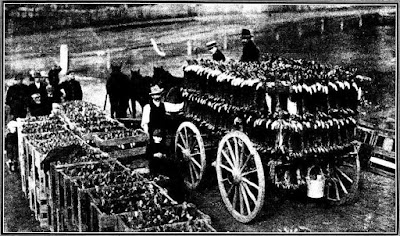 Record rabbit catch in the Riverina, The Sydney Mail 28 August 1912

Later that year the Manager of Wagga Wagga’s Borambola Station, Mr A.P. Wade, boasted a haul of 2000 rabbits in a single night to the Sydney Mail. The newspaper’s photograph of his inert quarry, arranged with Kondo-esque neatness, is reproduced above.

Just a week ago I went for coffee at the Lucid café in Gurwood Street (the ‘Paris end’ of Wagga) and saw a miniature lop eared bunny with markings resembling a Hercules Poirot moustache, fluffily hopping around nibbling pellets and carrot sticks. When she was ready to leave, its owner (appropriately enough) popped it into her handbag a la Paris Hilton!

Currently on Gumtree miniature rex & lop eared bunnies are available in Wagga and Thurgoona for between $30 and $120.

Australia exported frozen rabbit meat and pelts to Britain from the 1890s onwards. Rabbit stew was a favourite dish in ‘the old country’ and no less here where its economical and nutritious qualities sustained many a family during the Great Depression.  In the 1940s and 50s rabbit stew was still a rural favourite cooked over fires in rabbiters’ camps and, according to the Daily Advertiser of 15 January 1952,  introduced to city lads like Noel Mannering, Bill Pask and Peter Giles when they ‘went bush’ to celebrate the end of their apprenticeship training.  Ah, that 'schoolies' was as benign these days!

In the 21st century, two of Wagga’s most cherished institutions are Cottontails Harefield Vineyard & Restaurant and the Curious Rabbit Gallery-Café-Bookshop.

I think it would be accurate to say that this town has an ambivalent relationship with the lagomorph.

My own relationship with the species has also waxed and waned. An English childhood ensured that Beatrix Potter’s tales primed me to want bunnies as pets. I was given a pair when I was about nine. Benjamin was named for Potter’s creation, I can’t recall the name of his sibling. They were quite nasty and aggressive. Far from donning tam-o’-shanters and engaging in delightful whimsy, they scratched and bit me whenever I attempted to handle them or clean out their hutch and escaped to a neighbour’s (not Mr MacGregor’s) garden the first chance they got. 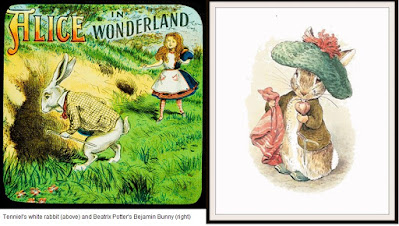 Tenniel's and Potter's rabbits - my childhood bunny ideals
Despite this disappointing real life encounter, the rabbits in the books I read were consistently endearing. As well as Benjamin there was Peter and the Flopsies (we had an EP of Vivienne Leigh telling their story and singing “We don’t care, we don’t care, we don’t care a fig, there’s a cabbage in the larder though it isn’t very big (and any way tomorrow is another day!)” There was Lewis Carroll’s timid, tardy white rabbit who beguiled Alice into taking that plunge into Wonderland. There were Hazel, Fiver, Campion and Bigwig making the epic journey to Watership Down in Richard Adams’ 1972 novel. There were Jane Pilgrim’s delightful Blackberry Farm books and Enid Blyton’s adaptations of the Brer Rabbit  stories.

I was not to get close up and personal with bunnies again for many years to come. Soon after arriving in Australia it was evident that rabbits were considered vermin here and subject to a variety of eradication techniques from baits to fumigation, from  buckshot to germ warfare*. Their fur was also the chief material used in Australia’s national hat, the Akubra. 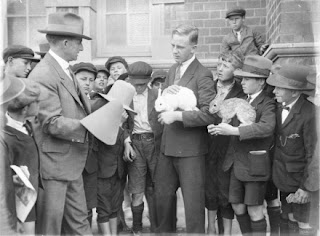 It was quite by chance that we came to own a succession of pet rabbits in the 2000s. When we still lived in Sydney suburbia a litter was born under a neighbour’s house and one, whom my daughter named Leslie, hopped into our lives. We had him less than a fortnight when our ginger cat, Simon chased him and gave him a bunny cardiac arrest. My daughter was bereft and we actually paid good cash money for his replacement, a dwarf  lop eared rabbit called Waldorf (after a block of apartments we passed in Parramatta en route to collect him). Waldorf had a mischievous and engaging nature. He spent some time in his hutch but plenty with us in the house. Our Friday night ritual was for the family to occupy the sofa and to seat him on the window sill behind us as we shared a Cadbury’s family block with him and watched a movie. Waldorf’s life was short – he disappeared one night, probably the victim of a dog, fox or owl - but evidence was that he had fulfilled his destiny with a neighbour’s doe as we saw his likenesses hopping about the street a few weeks after his demise. 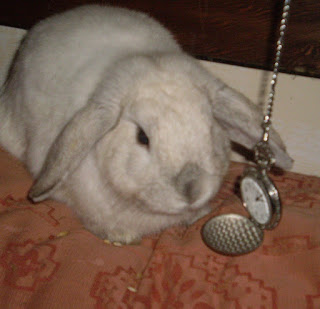 After Waldorf we had Doris, Brian and Stuie – all blow-ins, or hop-ins, and perhaps  (at least the first two who had lop ears) Waldorf’s descendants. Their fate was sealed when we moved to Wagga. They did not cope well and succumbed, we thought at the time, to the heat, but now I wonder if they caught calicivirus. Any way all three perished within a few months of relocation. Strange thing was that there was another bunny hopping about, a fawn coloured beauty. An abandoned packet of pellets and an empty hutch told us it had been the former residents’ pet. It seemed well adapted to the climate but our neighbour ran it over in her 4 wheel drive.

So the Riverina is no place for rabbits unless they are on a wine bottle label or a bookstore’s signage. However wild ones do abound so I guess the rifle totin’ locals can still catch a cheap tasty feed  or contribute to the Akubra supply chain!

*Anthropomorphic and cute though bunnies may have been in British literature I realised on a trip back to the UK in 1984 that the country of my birth had also tried to wipe out wild lagomorphs (although they were not an introduced species there), with the myxomatosis virus. We encountered an ailing rabbit on a drive through country lanes and after ‘rescuing’ it my Uncle Ken had to dispatch it with a resounding ‘thunk’ of his shovel.