It’s funny how apparently unrelated threads in our lives can intertwine and how we sometimes hit upon unknown facts about people that resonate deeply with us. In the last couple of years I have discovered the unknown (to me) talents of two friends  and an unsuspected connection between their lives and mine. These disparate skeins have become woven together in a way that is both bittersweet and cathartic.

Diablo Mode was big, dark and hirsute. A bear.  I met him when he was the newish partner of our long-time friend and former neighbour John Stone. John is a bear too. But grizzly. I sat on their deck in Stanmore and admired the assorted boots, joggers, and lone leather motorcycle glove, hanging on the fence, sprouting succulents. They looked quirky, a bit random and a bit curated. ‘That’s Diablo’s work’ said John. I looked around and soon saw other evidence of Diablo’s creativity: objects combining manufactured elements like thread, copper wire and brass tacks with native grasses and seed pods. 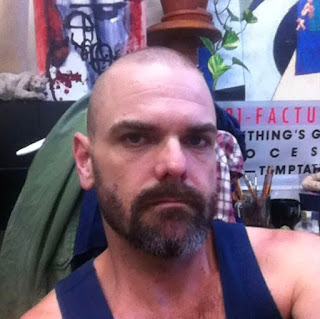 As well as being John’s witty, saturnine companion who lent me a sympathetic ear and settled me down to rest on their window seat when I got drunk after a fight with my sister, Diablo was an artist!

His earliest work was playful, impermanent. With chalk he drew stitch patterns over cracks in pavements and masonry and traced the outlines of shadows cast by streetlights leaving evocative after-images when the sun rose.  He came under the influences of surrealism, and its sister movement Dada, making slyly homoerotic collages and sculptures, increasingly incorporating found objects. As he matured as an artist Diablo was affected by a rich range of other influences and produced work of increasing originality and sophistication. On an art school trip to Central Australia he found his true metier: weaving using a combination of Australian native flora  and man-made elements. 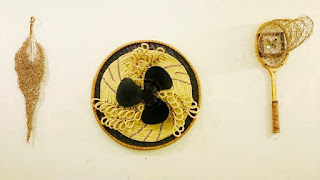 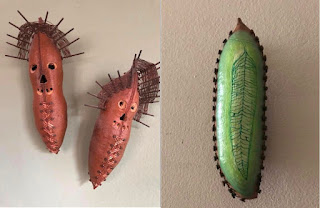 Diablo Mode was also known as  James David Gardner and he died suddenly in the early hours of 25 October 2018 aged only 45.

John was poleaxed. Sydney friends and artists rallied and arranged a fittingly flamboyant wake within days. Five hours away in Wagga, with a husband who had just had a heart attack, I couldn’t make it. John sent us a link to the slide show. The art impressed me, blending those industrial and botanic materials into forms that belied their fragility and impermanence. The pictures and videos of them together taking their dog, Bodhi, on road trips, walks and swimming undid me. 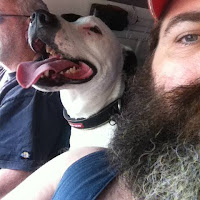 John, Bodhi & Diablo on a road trip in their van

Now John was faced with the challenge of re-homing Diablo’s vast stock of works in progress, art tools, accumulated found objects and botanic materials. Most could go to his family, but a destination for the painstakingly accumulated raw and prepared botanical materials needed to be found. 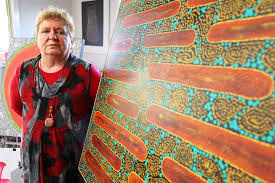 I first met Aunty Kath Withers during my short-lived career with Riverina TAFE. A revered Wiradjuri elder, she taught art at Junee Gaol. In its wisdom, the New South Wales vocational education system insisted she acquire a formal qualification to continue to do so. I met her weekly in the library and we quickly formed a bond over fathoming the weasel words and coyote concepts that make up vocational  training ‘packages’ and the byzantine complexity of TAFE’s eLearning system.

Aunty Kath got a diagnosis of breast cancer a few weeks in and we took a break so she could undergo treatment.  For some reason during that interval TAFE decided not to fund any more of our sessions together. Kath and I stayed in touch. I saw her give the welcome to country at several events and she invited us to her exhibition Looking Forward, Looking Back at the Wagga Art Gallery.  The breadth of her artistic output, which includes print-making, painting, pokerwork and weaving, often referencing her childhood in Wagga’s Tin Town, astounded me. We have two of her pieces, Murrumbidgee Dreaming and New Beginnings, on our walls. 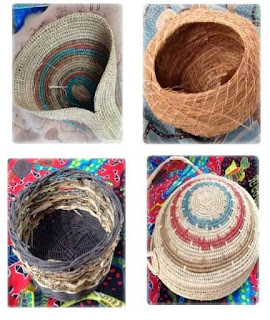 Despite an increasing success as a practising artist, Auntie Kath says her greatest joy is passing on her cultural knowledge and technical skills by running workshops, particularly weaving workshops.

An idea began to form…

Maybe Diablo’s botanic stockpile could travel the 450 km from Sydney’s inner west to Tatton in Wagga Wagga. There it could fulfil its destiny in Aunty Kath’s hands and those of her workshop participants. I talked to her and to John about it and early in 2019 John arrived in Wagga with Bodhi and a van full of treasures. 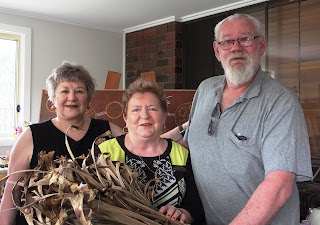 Delivering some of Diablo's botanic materials left to right: me, Kath and John

Delivering the cache and chatting we discovered a beautiful synergy.  Diablo and Kath had both learnt from the same mentor, the extraordinary and acclaimed basket weaver Virginia Kaiser. To compound the coincidence, I had also known Virginia, and packaged her work for an exhibition in Teheran, during my time at Craft Australia in the 1990s. It is extremely satisfying that our disparate paths have dovetailed like this. John  and others who knew Diablo agree that his materials are in good hands and will continue to be used by artists. It feels as though we are preserving an important legacy and perhaps contributing to the creation of new ones.

NOTE: All images are reproduced with permission of Kath Withers and John Stone.

For more about these artists visit