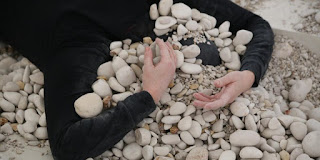 Choreographer/performance artist Linda Luke’s ‘Stone’ is described as an ‘intimate and atmospheric performance’ and a ‘meditation on nature and deep time exploring the symbiotic relationship between evolution, geology, rivers and humanity’. The work was developed with support from CREATE NSW, the Wagga Wagga Art Gallery and Booranga Writers’ Group and specifically references this locality and the Murrumbidgee. I saw the final of three performances at the Links Gallery last weekend. 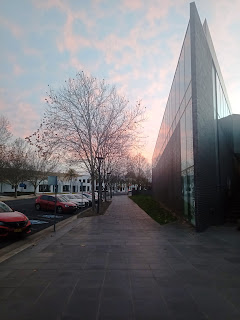 We approached the Civic Precinct in misty winter twilight to see the 45 minute performance. Visible through the sliding glass doors were multi-coloured stools and figures surrounded by surfaces that looked as if the contents of a technicolour piñata had exploded and stuck to them! This was the unlikely pop art prelude to the monochrome hues and serious mood of the work we were about to see. 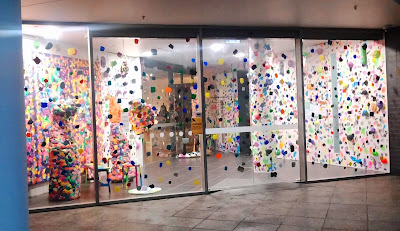 Roughly twenty five people, ranging in age from pre-schooler to sexagenarian, turned out to see ‘Stone’. An un-mic-ed staff member, as far as I could make out, asked the group to wait in the main gallery space so we could be admitted and all take our seats simultaneously and thus minimise disruptions. Viewing the amazing Art Express exhibition again while we waited was no chore and inevitably several people did wander in after the performance began.

After what seemed like several minutes of pregnant silence, the performance in the darkened space began under projected grainy images evoking flowing water and textured bark and accompanied by Liberty Kerr‘s percussive cello notes.  Next came the occasional clinking of stones as they rolled from atop a large meandering pile in the centre of the performance space, hitting the floor, suggesting an underlying upheaval. Surely, steadily, a human hand snaked from the mound, forming shapes resembling a plant shoot or a bird’s head emerging from an egg.  Slowly a full arm appeared. Tentative, hypnotic writhing and darting movements ensued. Then legs, one at a time with feet turned out like those on the Manx flag (sans armour), projected above the stones, as if testing the safeness of the air. Then the performer, Linda Luke herself, gradually arose from the stones, crouching, then standing as if willing herself to occupy minimal space, and lit with eerie shadows, her eyes closed seemingly reluctant to encounter even muted light, perhaps roused from hibernation.

The projections continued to play across the surface of her body, across the stones and onto a series of screens behind her.  The impression was one of natural elements merging and changing continuously. Linda wore a simple gauzy grey-black costume with some reddish tinged striations, her arms and legs bare and her face partially veiled some of the time.  A good surface for the play of light and shapes though my mind did also conjure a fleeting vision of a  faded flannel Annette Kellerman style swimsuit. 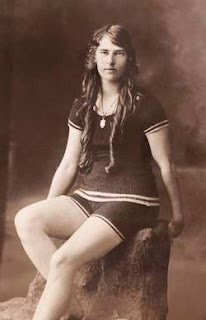 The cello produced sounds like breath and heartbeats, and as my partner noted later, not unlike the rhythms of much Australian Indigenous music. More strategic silences were employed. Linda’s movements suggested a creature both in confrontation with aspects of nature and also melding into its organic environment. Eventually she did so, almost literally, by slowly backing toward a series of screens at the rear of the space.  Densely mottled images projected uniformly across her body and onto the screens, she did seem to fade into them and to become absorbed.

There was a long pause before the audience broke into patchy clapping as each member decided for themselves if the performance had concluded.  A further pause and Linda returned in more conventional lighting and thanked CREATE, the gallery and us.

I felt moved by the concentrated intensity of the performance and thought its evocation of an ancient river and surrounding trees and terrain very effective. The work made me contemplate nature’s pre-human existence and its endurance into a future possibly also devoid of human life. One of my companions said he thought ‘Stone’ was about rebirth, the other that he thought it had the feel of a Dreamtime story.  I shared the view of one of them that the movements were not quite smooth enough to do the concept full justice when compared to say Lindsay Kemp’s seamless gliding and nuanced gestures or the fluid movements of many contemporary dancers. 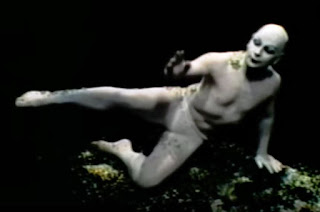 ‘Stone’ largely achieved its artistic and aesthetic goals. If for me it inadvertently referenced Annette Kellerman's preferred swimwear and made me nostalgic for Lindsay Kemp, I can live with that.