Both Kinds of Music

The earliest 'pop' music I remember hearing was an Andrews Sisters’ EP of ‘Don’t Sit Under the Apple Tree’ and 'Oh, Johnny’ that belonged to my grandmother. Then there was my parents’ Sammy Davis and Frank Sinatra collection – text on the sleeves all in Spanish because they bought the records in Argentina. We also mysteriously owned a Burl Ives’ 78 of ‘Big Rock Candy Mountain’ and Noah Found Grace in the Eyes of the Lord’. I'm talking the late 50s, early 60s, only Sammy and Frank could have been considered vaguely contemporary. Burl, Laverne, Patty and Maxene were quaint, if catchy, a description which also applied to most of the offerings on BBC radio’s ‘Children's Favourites’ which we listened to on Saturday mornings. 'Nellie the Elephant' and  'I Don't Wanna Play In Your Yard' come to mind. Sometimes Dad tuned our only transistor to Radio Luxembourg, a pirate station, but I can’t remember any of the shanties they played. 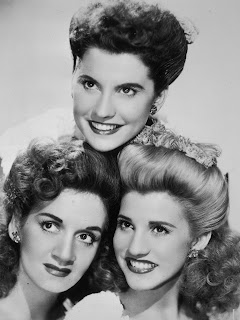 The Andrews Sisters - they swung!

As young girls, my sister and I had the obligatory crush on the Beatles and slept with black and white photos of our faves, given away in packets of Birdseye frozen peas, under our pillows. Me – John;  her – Paul. We had just one of their records, a mono EP, the one with the arty shot of the fab four, faces in half shadow, on the sleeve.  Though there is no way you could play music in the car in those days, in my mind the refrain: ‘and then while I’m away I’ll write home every day’ is inseparable from our drive away from our Lancashire home of 3 years to return to England’s south. 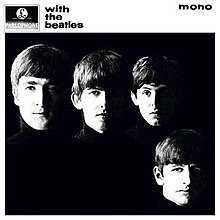 'and then while I’m away I’ll write home every day...’

As teenagers the same Paul-fancying sister and I lived in the granny flat under our house in 'The Shire', an infamous southern suburb of Sydney, Australia, not Hobbiton. There the radio was mostly tuned to 2SM.  I remember top forties stuff like ‘I Did What I Did For Maria’ and ‘Ma Belle Amie’ as well as a smattering of ‘golden oldies’. Hearing 50s songs prompted me to see the movies ‘American Graffiti’ and ‘That’ll Be The Day’ and I experienced the bizarre frisson of feeling ‘nostalgia’ for a decade I mostly missed or spent in rompers.

I owned just one record as a child, Vaughan Williams’ Fantasia on Greensleeves.  I had asked for a recording of the folk song attributed to Henry VIII only to be disappointed that Mr Williams had omitted the vocals.  Much later I acquired a few more ‘discs’. In about Year 8, a precocious classmate gave me a cover version of ‘Hair’ for my birthday.  Vocals were very much present on that record and I sang along, enthusiastically pondering why ‘pederasty sounds so nasty’ and, less provocatively, where ‘the Waverley Building’ was.

In my teens a boyfriend gave me Cat Stevens’ ‘Tea for the Tillerman’ and the follow up album ‘Teaser and the Fire Cat’. Both featured the singer’s own folksy (and possibly proto Islamic) cover art. It was the sleeve design, and of course the incomparable ‘Maggie May’, that attracted me to Rod Stewart’s ‘Every Picture Tells a Story’. However I was soon rocking and thrashing to every track on the LP until a coating of tomato sauce applied at a party we held in the flat rendered it unplayable. I had never heard of mondegreens in 1971 but I am pretty sure that at his near hysterical bluesy best Rod screeched ‘every preacher tastes of stale donut’. 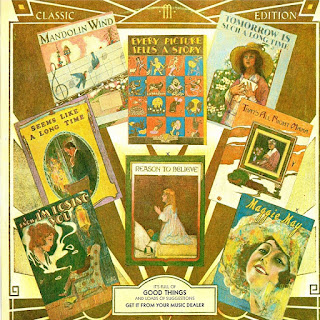 Loved this sleeve art on 'Every Picture Tells a Story'

‘American Pie’ and ‘Hot August Night’ were omnipresent in the early 70s. I have never tired of the poignant catchiness of Don McLean’s hit with its tantalising references to pop history, although Madonna later tried valiantly to ruin it for all of us. However even as I gyrated with my peers to ‘Crunchy Granola Suite’ and ‘Cracklin’ Rosie’ I felt there was something a bit naff about Neil Diamond, not least his name and jumpsuit.  Carly Simon, Roberta Flack, Carole King and Bette Midler all entered my orbit in the following years but somehow I didn’t encounter Dylan, Bowie or Springsteen… That was because my popular music education was arrested when I fell for a moustachioed uni student I met at the theatre. He was studying IT and ‘serious’ music and though he never introduced me to Cobol and Pascal, I was plunged into a parallel musical universe where Beethoven and Rossini (from the ‘Clockwork Orange’ soundtrack) emanated from his car’s tape deck. John Cargher’s ‘Singers of Renown’ followed The Goons every Saturday afternoon on ABC radio and Kiri Te Kanawa’s recording of ‘Les Chansons d’Auvergne’ was played obsessively at home by our thespian flatmate.  I was soon hooked on that and on the sublime arias Cargher played to say  nothing of his velvety blended Scottish-Argentine accent.

One exception was Handel whom I just didn’t ‘get’ then. It was the use of repeated and quaint sounding phrases in his oratorios that got me sniggering. I thought declaring Jesus a ‘wonderful counsellor’ was seriously weird and that George Frideric could have come up with something a bit more apposite than likening the son of god to an effective therapist.   I am more mature and better  educated now and am only tempted to giggle at ‘we like sheep’ – I mean, who doesn’t, in the paddock or on the plate?

The soundtrack to our lives wasn’t entirely classical. While we didn’t see pub bands and cult movies like ‘Performance’ and ‘Lisztomania’, we did sit up late and watch black and white Busby Berkeley and Astaire and Rogers movies, the pop culture of the 1930s! Seeing these films was a liberation for me as whenever musicals were screened at home my father complained that people did not burst into song like that  ‘in real life’ and responded to any terpsichorean activity by the men in the cast by yelling ‘dancing poons’ and turning the TV set off. 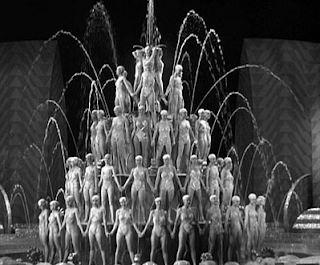 A foretaste of my passion for aqua-aerobics? Busby Berkeley's trademark style.

We weren't completely Amish about modern music though, and fell hard for Ian Dury and the Blockheads in the 80s – I think my Essex background partly accounted for that. However my poor training in live rock music performance sent me home in a taxi from their concert at the Capitol with a migraine. We were exposed to Madness and Dexy’s Midnight Runners on The Young Ones and I did follow British pop of the 80s for a while, UK Squeeze a particular favourite. I also went to a party once where ‘Ant Music’ was played over and over but it took Adam Hills years later to convey Adam Ant’s full cultural import.

About this time, someone I worked with had a brother in a band called The Skolars and also used to go and see some guys called The Cockroaches. All I saw of either band was flyers taped to telegraph poles.  I believe the former traded in their Newtown black for some colourful turtle necked garments and had modest success a while later. 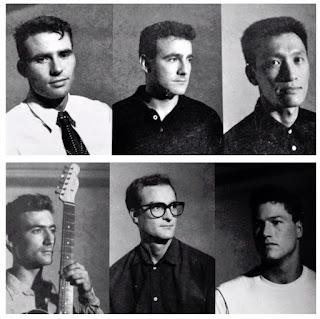 Some grungy garage band from Newtown

Pregnant with our first child I discovered Carmina Burana. The baby heard it in utero at the Sydney Opera House and then kicked along to the CD at home.  In his first year of life he was piggybacked around the house to ABC ‘Classic Kids’ – Flight of the BumbleBee and the William Tell Overture particularly delighting us both.  I liked the songs on the Tim Buckley tape a friend, recently unlucky in love, gave me, but failed to realise that his death  some 15 years earlier was the loss of a great talent. Fortunately he bequeathed the world  Jeff, equally talented, and sadly equally accident prone.

I thought ABBA 100% Eurovision material, i.e. horribly kitsch, when they won that contest and didn’t  really warm to them as they went on to take the world by storm.  Being deeply pedantic I disputed that a history book on a shelf could repeat itself and that Agnetha’s and Frida’s sexual surrender could have unfolded in ‘quite a sim’lar way’ to Napoleon’s military one. (I certainly hope they didn’t suffer piles like he did). I did appreciate Toni Colette’s and Rachel Griffith’s ABBA homage in Muriel’s Wedding though assumed it was a parody. When I finally saw ‘Mama Mia’ I had to admire its sheer exuberance (Pierce Brosnan’s singing notwithstanding). Kathy Burke and James Dreyfus also gave ’Gimme, Gimme, Gimme’ associations I could live with in their eponymous comedy series. Anyway, doing aqua-aerobics for over 20 years makes ABBA’s music inescapable and it is good to exercise to.

Maybe surprisingly my musical education was further enhanced by my Masters studies. A favourite lecturer on 'Work & Learning' played us songs such as Dolly Parton’s ‘9 to 5’,  Bruce Springsteen’s ‘Working Life’ and  Roy Orbison’s ‘Working for the Man’ and proved that a very respectable critique of capitalism exists in popular music. I continue to learn at my exercise classes in the pool. I have encountered Coldplay’s ‘When I Ruled the World’, Tom Petty’s ‘I Won’t Back Down’ and  Mental As Anything’s ‘Live It Up' there as well as the most bizarre upbeat cover of Helen Reddy's 'I Am Woman' (difficult to splash around merrily to: 'you can bend but never break me' and 'yes, I am wise but it's wisdom borne of pain').  I both recalled and learnt heaps about western popular music (including the all-important Adam Ant) by watching Spicks and Specks. Leonard Cohen and Bob Dylan snuck in to my consciousness too, courtesy of a work colleague, and I had the pleasure of seeing each of them live in Sydney with my niece. 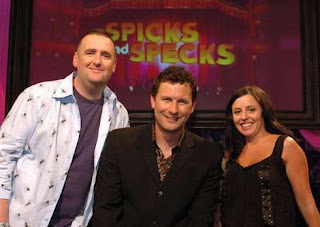 Alan Bro, Adam Hills and Myf Waughurst - Spicks and Specks conjured up my repressed pop memories and taught me lots of stuff I didn't know.
I continue to discover a lot of pop music retrospectively. Michael Jackson in the saturation coverage during the weeks after his death, Elvis, also posthumously, because of a marvellous 2 part doco shown on SBS, and a multitude of blues artists through Martin Scorsese’s amazing  2003 series.  Our radio is permanently tuned to ABC Classic so that is the music that still dominates my days. I recently let the side down by not voting in their Top 100 Favourite Composers, or I may have actually let the composers down personally if some of the station’s promos are to be believed. Thing is, I don’t have a single favourite composer or artist or even a list of ten of them.

Variety is the spice of musical life! Looking forward to The Sapphires this week in Wagga and Bach in the Dark in Gunning soon!
Posted by Alice at 1:08 PM