My paternal grandmother, Violet Victoria Brown, was born to George and Martha Brown on November 8, 1897 in Newtown, New South Wales, the youngest of four children. Within three weeks of her birth, the tragic drowning of her brother, Thomas, in the Clyde River, Granville was to leave her the youngest of three and to traumatise her parents, especially her father, irrevocably. It is family wisdom that growing up with the story of Tom’s misadventure gave her a lifelong fear of going into the water and certainly she never learnt to swim and protested at her children doing so. 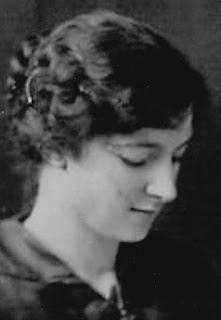 I only met my Australian grandmother a handful of times. The above pieces of information came from my knowledgeable cousin Cheryl Venables and from my own research. Most of what follows is based on four pages of spidery writing in blue biro on lined notepaper I found amongst some old family photographs from the Pittard side of the family. Dating from the 1980s, they are a determined attempt by ‘Ma’ (as my father always called her) to set down her memories of life as a young woman in Sydney’s Newtown. It has been an honour and a pleasure to interpret them and to further research some of their content.

Throughout the late 1890s and early 1900s Violet and her family lived at various addresses in Newtown, principally in Australia Street, toward the Camperdown end, possibly at number 81 which shows up as the residence of her brother Victor in the 1930s. She is likely to have attended Newtown Public school until the age of about 14 when she left and found work as a shop assistant at Sweet Brothers. Sweet Brothers was an established drapery and variety goods store located at 249 King Street where the IGA now stands. As the 1912 photograph below shows, it occupied two adjacent sites as well. What remains of the original building became a series of supermarkets. The art nouveau plaster ceiling of the Sweet Brothers is still visible above the shelves of groceries at IGA.

Three views of 249 King Street, Newtown, as Sweet Bros in 1912
and as Flemings and IGA much later in the 20thC.

Violet was paid 5/- a week for working on the women’s garments and accessories counter. There she sold hair chignons for 2 shillings and 11 pence each that were matched to a woman’s natural hair and pinned into place with hairpins. The chignons formed rolls around which the woman’s own hair was swathed enabling Newtown ladies to achieve fashionable Edwardian hairstyles. The nearby millinery and frock department had a very erect and proper lady floor walker, a kind of female captain Peacock, who swished up and down the aisles in a high necked black dress with a long train.

The shop used the vacuum tube method of sending money to the cashiers; small cylinders ran on wires overhead. The customer’s money went inside, Violet or a co-worker then pulled a cord and the tube was propelled towards the cash desk; the customer’s change was returned to the counter in the same manner.


Sweet Brothers’ merchandise was widely varied and, as the 1911 advertisement below attests, delivered free to purchasers throughout New South Wales. No wonder it was where ‘Biz hums’! My grandmother particularly recalled the tables of beautiful glassware priced at 1/- and 2/- a piece (mass machine manufacture of glass began in the 1880s) and the popular cutthroat style ‘Bengal Razors’ selling at 1 shilling and 11 pence and 2 shillings and 11 pence. 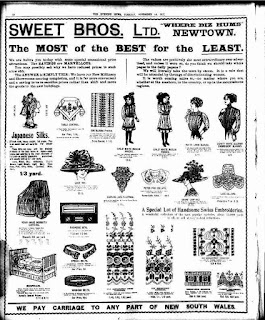 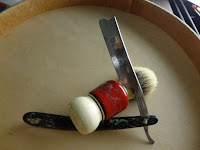 Violet began ‘stepping out’ with young men in her later teens (she married at 19). Newtown was a thriving shopping centre and King Street bustled. It had its own picture show, The Hub (not the one at Newtown Bridge but an earlier theatre of that name on the south side of King Street near the corner of Brown St), as well as markets and the St Georges (dance) Hall near the station. Courting couples may even have strayed into the tree filled, shady St Stephens cemetery which was not to surrender most of its grounds and many of its graves to form Camperdown Memorial Rest Park until the 1940s. 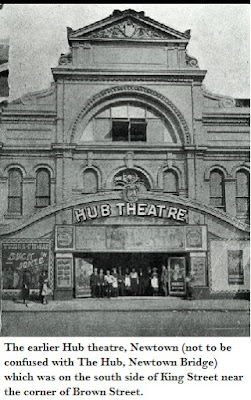 Violet describes a walk with a beau along King Street passing various buildings and businesses and sometimes calling in to buy. On the south side of King Street, on the corner of Erskineville Road was Newtown’s superb 1893 red brick Post Office which still stands, albeit beleaguered by one remodelling of its ground floor after another. A few steps along was the Presbyterian (now Uniting) Church and R.H. Gordon’s furniture store from which Violet’s brother, Vic, bought 3 rooms of furniture when he married in 1910 for just £27.00 paid off in weekly instalments of 2/6. Hire purchase being a new practice that enabled newlyweds to furnish their homes now and pay gradually.


Both Marcus Clarke and Anthony Horderns had Newtown stores in her day but it is Brennan’s Drapers on the corner of King and Wilson Streets that Violet recalled.  The façade of its once grand premises still stands though the shell now houses a gym, a pharmacy, a boutique and a video hire business, amongst other shops, at ground level, and offices in its upper two storeys.  Brennan’s still traded when I was a uni student living in Newtown in the 1980s; its underwear, scarves and giftware displayed on wooden tables and racks of blouses and overcoats draped in plastic to protect them from the dust generated by King Street traffic. Also on the south side of King Street was Tom Cousin’s Hardware Store whose eponymous proprietor became a Newtown alderman, and a small stall selling fresh fish and oysters for 1/- a dozen. Violet was partial to oysters but usually settled for the bottled variety; she would stop here as a treat.

Above: Hatte's buildings on the south side of King Street and adjacent Brennan's store as it looks today.

Above: An artist's rendering of Hatte's arcade on the north side of King Street.

Along the north side of King Street, close to Sweet Brothers was a Sargent’s Refreshment room, she recalls Sargent’s pies, which pioneered an Aussie tradition, as the being the best she ever tasted.  An enterprising Irishman, Charles George Hatte, owned premises on both sides of King Street; Violet particularly recalled Hatte’s Arcade which opened in 1904 and which, from a contemporary artist’s drawing, appears to have been as elegant and well-proportioned as the Strand Arcade replete with palms and cast iron balustrades. Because shopping hours were unregulated and the arcade also contained meeting rooms it was lively at all hours. Hatte, like Cousins, became an alderman and bequeathed the town an ornate drinking fountain which stood on Newtown Bridge from 1897 to 1929 when the road was widened. It was doomed any way as the council tired of replacing the little copper cups that were attached to it by chains only to be regularly detached by vandals. 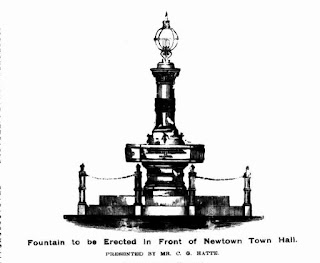 
Next to the station, on the corner of Newman Street, in premises that had once housed the Sydney Omnibus Company, were the Newtown Markets which Violet recalled as selling everything ‘from a mussel to an anchor’, I don’t know if that is an actual expression or just her quaint turn of phrase, but it is evocative of the myriad goods the markets purveyed.  She remembered an old Indian man sitting at the entrance selling bunches of sarsaparilla which you boiled up and drank as a ‘blood purifier’.  Perhaps Violet’s lifelong interest in naturopathy sprang from taking that sarsaparilla infusion? All self-respecting markets sold flowers and more than one of Miss Brown’s suitors felt it apposite to buy her a bunch of violets as they wandered amongst the stalls.

A busker at the markets was a man named Albert Brett who had lost both his hands at the age 13 in an industrial accident at Bakewell’s Pottery, Erskineville.  She recalled him in 1905, playing ‘an organ on a stick’ and carrying a small monkey on his shoulder. Albert Brett was not a busker all his life though, he became something of a Sydney celebrity for overcoming his disability and mastering many skills including writing, sewing, cooking and marksmanship. He received accolades when, in 1914, working as a nightwatchman in Canterbury, he overpowered and arrested a trespasser and marched him at gun point to the local police station. 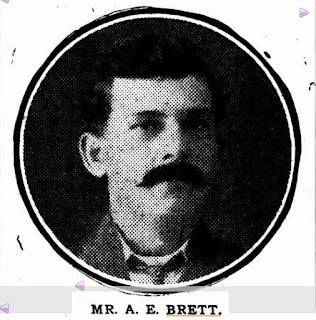 Just past the station stands St Georges Hall, built in 1887 as a venue ‘suitable for public meetings, gatherings and entertainments of all kinds’ (Sydney Morning Herald, 1887) and now part of the Newtown Performing Arts High School. The building has sprung floors and balls and dances there were presided over by a Miss Allen (I would love to learn more about her). My grandmother knew that white gloves were de rigeur for the gentlemen so perhaps she took a turn around the floor once or twice herself. The hall had a performance space where the Beale Musical Society regularly staged smoking concerts and operettas.


Further down towards Enmore at 455 King Street was Abels Bakery from which most households obtained their daily bread. Violet’s uncle worked there, later moving to Dibble’s Bakery, not the main premises which still stand adjacent to the Camperdown Memorial Rest Park, but a smaller outlet at 508 King St. It was from Abel’s that Violet’s wedding cake came when she married my grandfather in 1917.  Near both Abel’s and Dibbles bakeries is Camden St where Violet recalled living as a teenager, the delicious aroma of boiling fruit from the Peacock Jam factory ever present. Later Peacock’s moved to Darlington and was bought out by IXL. Its Camden street site is now occupied by an unprepossessing block of units; ironically, if the factory had stood and been converted to apartments it would have been a gold mine for investors. 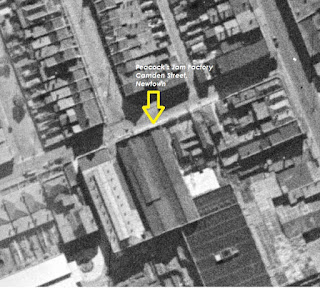 The last anecdote recorded in my grandmother’s four pages of Newtown notes concerns Albert Brett’s brother, Walter. Violet’s mother was a friend of the Brett brothers’ mother but the story has nevertheless got twisted in the telling, though is no less sad or dramatic for that. In July 1901 Anthony Horderns Haymarket store was engulfed in a huge fire and her story goes that Walter Brett was stranded on the roof, jumped and missed the sheet firemen held out to catch him.  Walter Brett was indeed killed in the Horderns fire. He was an employee and was not seeking refuge on the roof but was with an engineer by the name of Dashwood in the engine room attempting to cut off fuel to the blaze. They were trapped there and their remains weren’t recovered until a few days after the fire was extinguished. 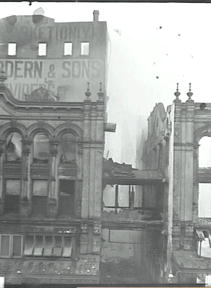 Violet’s last sentence trails off with a reference to World War I,  the fact that Australian soldiers got paid 6/3 per day and the enigmatic statement ‘I have photos from France’.  I have only recently learnt the possible significance of this. Another cousin, Beryl Whatson, informed me that my grandfather Albert Arthur was not Violet’s first love amongst the Pittard brothers. She had been engaged to the older Frederick Charles who was away fighting (yes, in France) from 1915 to 1918 and my grandfather must have pressed his suit or, as some evidence suggests, played on her sympathies and won her during his absence.