Depleted but not down


Reflecting on the year that was, it’s hard to get past the pile of celebrity corpses. Some of the losses, like Victoria Wood, David Bowie, Gene Wilder and Alan Rickman, struck me a savage blow. With the exception of Wilder, all much too young. With the exception of Wilder, British performers whose personae and work really resonated with me. For me, Gene Wilder is in a category all his own. Just the most beguiling, slightly demented, gentle, wonderful man and always, always the ONLY Willy Wonka for me.

Presumably celebrity deaths, however premature, are usually made as comfortable as possible and are certainly not as tragic as those of the thousands of civilians who perished in Syria (about 300,000), Afghanistan (over 69,000) and Iraq (about 188,380) during 2016. It is the illusion that we ‘know’ famous people that makes us feel their loss so personally. Sometimes a public figure like Carrie Fisher is so forthright and shares so much of her world that this sense that we know her is reinforced. I haven’t been a lifelong fan or even seen much of her film work but she had become a symbol of survival and spokeswoman against Hollywood sexism and it just gladdened me every time I read something she had written or said or I saw her interviewed. She was whip smart, funny and brave. We were also the same age.


Watching a roundup of countries around the world welcoming the New Year on the ABC last night I was struck by the warmth and optimism expressed.  Is it enough to conquer the threats of continued warfare, global warming induced ‘natural’ disasters and the election of that narcissistic orange moron to the highest office on the planet?  I don’t know, but I am going to throw my lot in with the positive thinkers. Looking for and coaxing out the best in human behaviour seems the only sane choice and is certainly better than being consumed with anger and despair.

Requiem for the Streets, composed by Jonathan (Choir of Hard Knocks) Welch, Andy Payne and Kathleen McGuire, a portion of which, (the Gloria/Anthem of Empowerment), I was privileged to perform along with some 300 other Wagga residents, most of us untutored, last November as part of Social Inclusion week, attempts to find hope and redemption in celebrating the lives of those lost to crime, neglect, disaster and warfare on the streets of every country around the world.  Its message about the need to protect the vulnerable is both poignant and jubilant.  Our performance is captured on an amateur recording on Facebook at https://www.facebook.com/groups/1643747812583938/


There is also a live performance of the entire Requiem available on YouTube: https://www.youtube.com/watch?v=W5MN_lfTvds&list=PLwHx0O0gnxuj3Vnf5RZBtImSqzAGvjQrK&index=8  It’s really worth listening to.

Participating in the One Voice Community Choir was a high point of 2016 for me. I have never had the courage to sing publicly before and everything they tell you about endorphins and elation is true. It was also a wonderful bonding experience with my partner and daughter and people from the region. To say nothing of the buzz I got out of shouting Johnathan Welch a drink at the Farrer afterwards!

So that was November. Much of the previous two months were taken up with rehearsals for the performances so  my involvement in the Booranga Writers Group took a back seat and I wrote very little – I notice that my last post here is dated August.  I did however meet Queensland writer Jena Woodhouse through the group and have been thoroughly delighted and inspired by her conversation and writing. She has visited Wagga twice and we have shared our passion for history, books and cats over coffee on both occasions. Jena has given me ideas, encouragement and reading lists and I feel blessed to have got to know her. Some of her most recent poems are published here http://disappearing.com.au/poet/jena-woodhouse/

Also in 2016 my family history research led me to discover eight more living relatives with whom I have now made contact and some of whom I hope to meet this year.   In February we concluded a visit to Sydney by driving to Gosford to meet my second cousin Beryl whom I connected with via Facebook a couple of years ago. Our rapport and mutual affection was immediate. Beryl shared many family stories and showed me drawings and paintings done by my great grandfather, Louis Frederick (Fred). We speculated as to whether one pencil portrait could be of Henri Garnay the notorious forger husband of my great great Aunt Pauline who was extradited to Noumea in the 1880s. What do you think? 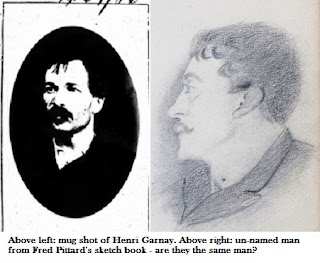 What else did 2016 bring – profound or trivial?


Pokémon Go obsessed the nation’s young people mid-year. It was unusual to see so many youths walking around public spaces albeit with eyes fixed on their device screens. While this behaviour brought police action in Sydney’s Rhodes, in Wagga it merely meant a few more visitors to the Botanic and Victory Memorial Gardens. Some publicists  thought ‘planting’ a Pokémon at a venue or facility might attract more members of the public so I can be forgiven for thinking I had spotted Pikachu in the rafters at our local aquatic centre. The lifeguard’s dismissive comment when I drew his attention to my find, ‘it’s a ball’, just didn’t get into the spirit of the quest at all.

We got our first taste of Riverina floods in September. Nothing like the pictures I’ve seen of submerged streets but enough to keep my husband and his State Emergency Service colleagues busy sandbagging from Temora to Barooma to Eunonyhareenyha. I got the flu at the same time and these joint trials caused us to miss the Sydney 60th birthday party of a much loved friend.

Try though as I might I couldn't miss my own 60th which occurred last year. At my age both my parents’ days were numbered and I approached this milestone birthday with some trepidation.  I am glad I have got to know some older relatives recently. They give me a more positive perspective on ageing. Also therapeutic was watching Advanced Style about women in their 60s, 70s and 80s who dress with flair and live life to the hilt. Perhaps a little self-indulgent and overlong,  but it gives a huge boost to women feeling wistful about the passage of time!

So 2017, surprise us. May Donald Trump find reason. May Maggie Smith and David Attenborough see you out.  May my kids no longer be subject to the caprices of Centrelink and the job market. May I write more and better.  Let’s all carpe diem.  All remaining 362 of them!