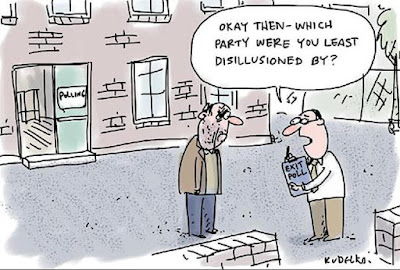 
My formative years occurred during the Whitlam era and my first political act was to demonstrate against its abrupt termination. That means I take my politics pretty seriously. I have empirical proof that a government’s vision and policies can transform the way people feel about their country, their place in the world, their future and one another. I witnessed progressive programs like Medibank, anti- discrimination legislation, Legal Aid and no fault divorce build a fairer, better society in this country.

Over the past few years I have seen Australia’s two major political parties embrace economic rationalism and neo liberalism to varying degrees. I have seen weasel words, reactionary spin and three word slogans replace genuine vision and a plan to realise it.  Manipulative, hollow rhetoric has become the norm and if the polls dip one iota the ‘stop the boats’ and ‘jobs and growth’ mantras reach crescendo.

Like many I am sickened by the contempt for human rights that our immigration detention centres represent and the casual callousness most politicians show towards the suffering and deaths of those held there. John Howard normalised Hansonist xenophobia and the ‘we’re full’ mindset and, amongst the major parties, only the Greens have had the guts to openly oppose our policies towards refugees.

I always found the National (formerly Country) Party a bit of a cypher but now that I live in a rural electorate I realise that parochialism is somewhat understandable given the vicissitudes of being ‘on the land’.  Regional dwellers also perceive  their access to jobs and services compares unfavourably with that of their capital city cousins, and as far as broadband speed goes they are right! However Wagga seems to benefit from a number of well-funded regional programs that mean we are quite well resourced. I have never been to so many free, catered community events, and, in our experience, waiting times to see health specialists are short. Another Whitlam legacy, the Australia Council, means that Wagga Regional Gallery houses the largest art glass collection in the southern hemisphere. Our unemployment rate is 5.8% which isn’t good but is the same as the national rate and, importantly, we are amongst the first towns to get the new ‘countdown’ traffic lights. It’s very reassuring to have Molly tell me ‘do yourself a favour and cross now’!

When I mentioned at my aqua class recently that I usually vote Greens such was the contempt of my fellow bathers that I felt lucky not to be summarily drowned. I’ve looked at National Party voters from both sides now – from up quite close and from afar – but really don’t know them at all.  I would have thought, given the massive desalination programs conducted in the Riverina over the past few decades and the rehabilitation of wetlands now underway, that environmental issues would have some traction here.  Perhaps Waggan Nationals just want to believe that they, not some atheist hippies, twigged to the problems and developed remedies.

Any way, back to my, and most of the nation’s, state of double disillusionment in the wake of last weekend’s election. What now seems like eons ago, Malcolm Turnbull, thinking, utterly erroneously, that the timing was good and that a long campaign would benefit the Coalition, put it to the GG that the Senate thwarting his building industry watchdog legislation was a national emergency and that a general election must be called. Watching the newly anointed Malcolm Turnbull resile from his former stances on a republic, climate change and the rights of same sex couples, the disillusion expressed in the only poll that matters, the postings of my Facebook cohort, was overwhelming. His readiness to compromise proved that whether they be faceless Labor men or fundamentalist Liberal nutters (I’m looking at you, Corey and ScoMo) a party leader is expected (by his/her machine) to bend to a degree that would defeat most contortionists and to rationalise their inconsistencies and outright reversals without betraying a flicker of the shame and self-loathing you would hope they are feeling.

I stress that this is what the party machines demand, we, the public, are pretty sick of it… We apparently feel more at ease with the unbridled emotiveness of Derryn ‘Human Headline’ Hinch and Pauline ‘Ploise Explain’ Hanson than the carefully managed personae of our recent leaders. In the aftermath of the election people are talking about never glimpsing the ‘real’ Malcolm Turnbull just as they complained that the ‘real’ Julia Gillard was masked by her minders. One major difference is that the ‘real’ Julia is quite nice and I suspect the real Malcolm, unconstrained by having to pretend to like ordinary people, is an arrogant prick.

A bit of image management isn’t altogether bad. Since his coaching blitz restored Bill Shorten’s ability to smile and make eye contact and drastically reduced his zinger count (much to Shaun Micallef’s dismay) he does seem a more viable PM. Labor also benefitted from the fact that their ‘killing season’ is now more distant history than the Liberals’. Tony Abbott’s chagrin at their campaign launch was palpable while Labor (finally) presented a united front.

Much has been said and written decrying Labor’s ‘Mediscare’ tactics but the conservative side of politics has never hesitated to paint Labor as too cosy with the union movement and this is just the equivalent, drawing attention to your opponent’s driving ideology. Why not call out a party on its particular embedded values? The Liberals would never have introduced socialised medicine / a national health care system and are on the record as opposing it and intending to dismantle it.

I started writing this before Monday night’s Q&A, already sensing a parallel between David Cameron’s ill-fated Brexit referendum and Malcolm Turnbull’s double dissolution election gamble. Then I listened to Holly Ransom, Paul Kelly and Sarah Hanson-Young and became convinced that disaffection with the political establishment and the desire to attribute blame for diminished opportunity has led voters in the US and the UK, and now here, to reject conventional political leaders and lend their support to larger than life xenophobes and bigots who never let the facts get in the way of a good pitch.  They are disillusioned. Those of us who grew up believing there were politicians who would actually work for a better world are doubly so.

Well said, Jan, although heavily left-wing. I am disappointed that not more voters are turning to the Greens in response to the appalling treatment meted out to asylum seekers. I could not vote for a party which spoke about the plight of asylum seekers in such nasty terms - so I continue to vote Green in protest.