My blog postings are usually about my various enthusiasms. They often relate to history, to books or the arts, sometimes they are observations on my experiences and encounters. They are in prose. However my last post was a poem, a poem about the Wagga aquatic centre.  In effect, a poem about one of my enthusiasms but also about history and significance and about coming to know a place and its people better.  Seems it didn’t resonate with my readers. I have never had zero response before.

I have felt inclined to write poetry since joining the Booranga Writers’ Group. That is the predominant mode there; a poem can be ‘workshopped’ more readily than stories and articles. A poem is a very concentrated, economical expression of an idea or a feeling so writing poetry is a good discipline and manageable when there are many demands on one’s time and energies.

I wrote another one. Unfortunately it also featured the Wagga aquatic centre. Can I help it if  the place inspires me? It was about a woman I often see there. She uses the hydrotherapy pool and ends her session about a quarter of the way into my aquarobics class. She has perfectly ‘set’, undampened white hair and deep, almost hollow, eye sockets  in an impassive face.  Her towel-draped form proceeds in stately fashion toward the change rooms, at a certain point she raises the sandals she holds in her right hand in salutation.  I exercise in the front row and assumed, as I don’t know her, that she was greeting those behind me. Then it occurred to me that her ‘greeting’ might be for me after all. I began to conceive of her as some kind of harbinger, a grim reaper in lycra, perhaps visible only to me, if not portending my mortality, at least reminding me that my hydrotherapy days await.

My husband, who helped me by reading successive drafts of the previous poem, said the second one didn’t work. He said ‘there is a musicality in your prose that just isn’t in this…’ He suggested I turn it into a more conventional prose post.  I knew he was right but I liked some of the images in the poem (I had worked in the line ‘not waving, but beckoning’) and was loathe to relinquish them.

Anyway, here we are.

I turn 60 soon. This fact, the deaths of so many 60-something celebrities this year, my constant recording of death dates for my family tree and the premature deaths of both my parents in their 60s have all made me contemplate my own mortality.  While I exercised with a cross section of age groups in Sydney, here I am in a class with retirees, many of them sexa, and septua, genarians.  I take no comfort in being in the younger age range of this demographic; if I was Patty Duke or Alan Rickman I would be best advised not to buy my passes in blocks of twenty. Not that any of us has a crystal ball, or a non shrieking bathing-suited banshee, to foretell our demise.

Morbid obsessiveness aside, there is much to relish about ageing. It is now my prerogative to make time for my enthusiasms, including my pool visits and my historical research, to spend  time with my family, friends and pets, to read that book or watch that film I have always meant to, to sleep as little or as long as I like… It is also my prerogative to write poetry for the first time since my teens, as it is yours to prefer my prose! 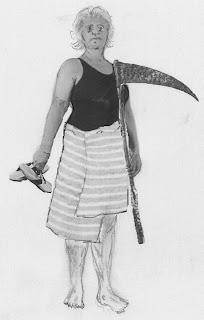 The gran reaper - my personal aquatic harbinger.
Posted by Alice at 11:43 PM