Losing our two rabbits and a beloved cat in a single week (to the heat and a brown snake) in our first few weeks in Wagga has led me to reflect on my naivety about the risks our new environment poses and to ponder the strange accidents of history that have put this fairly Anglo family, with its predilection for William Morris arts and crafts and Beatrix Potter-style anthropomorphised pets, in the middle of the Australian bush.

I have been piecing together what Australian history I already knew and what I am learning about the Riverina region specifically to help make sense of my feelings – feelings of loss and displacement side by side with those of exhilaration and rapidly growing love of this landscape and town.

Such sudden evidence of the vulnerability of our urban pets has driven home to me with brutal intensity how paper bark thin is the veneer of suburban decorum here.  Kooringal’s winding streets sport bright green sprinkler-fed lawns,  garden beds of foxgloves and heliotrope and faux classical embellishments adorn the houses, yet many of those houses, like ours,  back onto  rugged, rocky terrain where heatstroke, snakebite and god knows what other perils await. When the sun is relentless and the air is humming I can’t avoid visions of Miranda and her school friends vanishing! 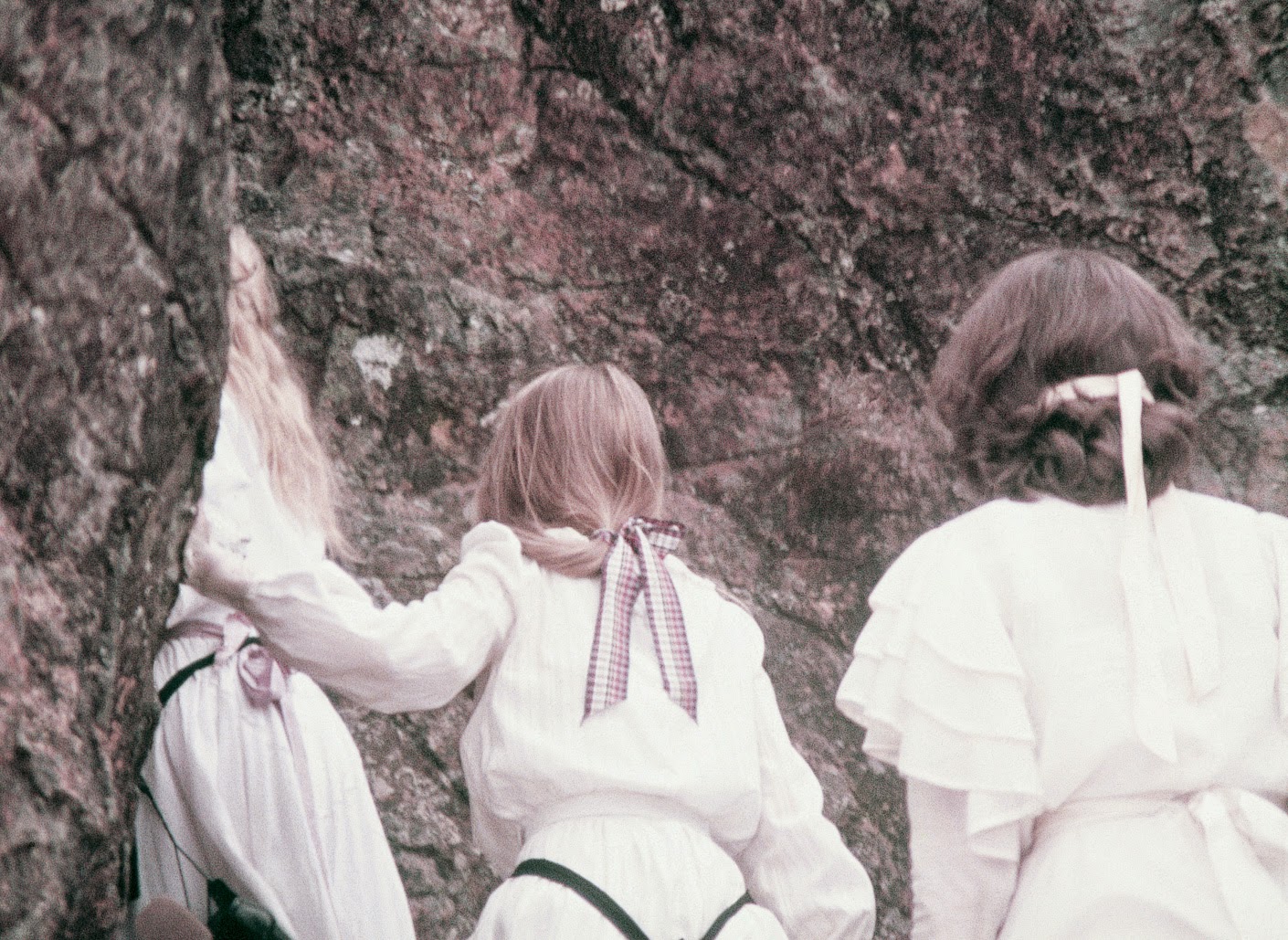 Disappearing into the impenetrable mysteries of the bush, Picnic At Hanging Rock.

I found an unattributed poem* published in the Wagga Wagga  Daily Advertiser of 25th November, 1941 (65 years  to the day that I am writing this). It expresses the solace provided by quiet reflection on the banks of Wollundry Lagoon, on how the ‘things of Nature, God's kind forgiving smile’ help to heal both the soldier’s mind still full of the ‘frenzy of Tobruk’ and the troubled soul of  ‘some forlorn, weak sister’ who has morally transgressed. Then the poet suddenly conjures up images from the distant past:

(When) in Wollundry's garden a vision strange appears
Of native children playing among the ancient trees,
And camp smoke slowly rising upon the languid breeze.
No trim lawns then and willows, or fragrant scent of rose;
Long reeds and waving grasses, and calling of the crows.
Here dark-skinned men and women; God's creatures yet untamed
Lived innocently happy, untutored and unashamed.
They heard the kookaburra with cheery laughter greet
The sunglow, overspreading the morning, dewy sweet.
They saw the wild duck leaving their night-enchanted haunts
And took what Nature offered to satisfy their wants.
The kangaroos leaped lightly, the emu loitered near
Sufficient for the hunting, the boomerang and spear.
The native life was simple. Its savagery was mild.
And heart, however cultured, still leaneth to the wild.
There is something very pleasing in unspoilt forest still.
Ere man with axe and fire has worked his ruthless will
There heaven-assisted Nature moulds in unrivalled way
Her monumental splendour from elemental clay.

Despite its romantic paternalism (and inaccuracy about who first used fire to manage the land), the poet is attempting some 100 years after Wagga’s genesis as a European town, to grapple with the same paradoxes I am.  To reconcile what consoles her of contemporary values and taste with an imagined past she admires  as elemental, innocent and unspoilt.  She quickly excuses herself from judgement with the line “And who shall say the old thing was better than the new?” 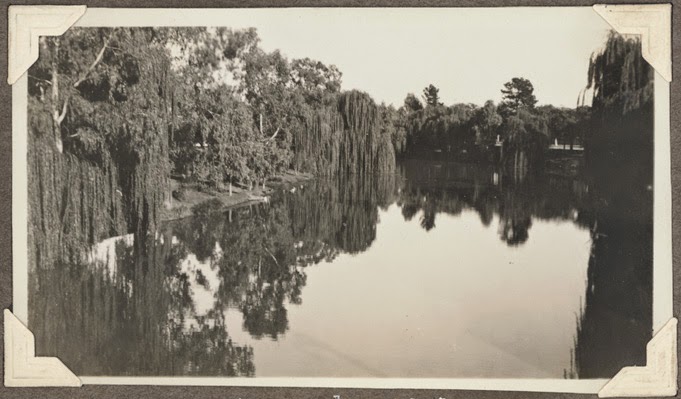 The willows of Wollundry Lagoon in the 1930s (NSW State Records)

But we all do, constantly, declare an old thing better than a new or a new thing better than an old. When land was cleared for grazing in the early-mid 19thC the practice was supported by progressive,  benevolent natural scientist and  pioneer authority on Aboriginal culture, Alfred William Howitt, as ridding the land of miasma producing toxins. Also, as Wagga poet and memoirist, Mary Gilmore relates, sheep and cattle station owners saw the plants and birds which had flourished in  sanctuaries preserved by the local Wiradjuri  people for centuries on the as hazards and impositions. They eradicated the river oaks completely and drove the black swans from their nests smashing their eggs. They believed they were cleansing the landscape to better provide for their families, they had no inkling of the salinity that was to affect the soil so soon afterwards.  Regeneration of bush and wetlands decades later shows the old reasserting itself against the new!

We didn’t see  the brown snake get our cat. My son had seen it  earlier in the day winding away from the fishpond, and I had not thought anything of it when he told me. Her symptoms however, back legs giving way with ascending paralysis, venom affecting her breathing muscles and her mouth frothing up, were textbook. I realised that when I did some reading later. We don’t know for sure that the rabbits succumbed to heat exhaustion. They may have dehydrated, rabbits in the city don’t need drinking water you just dampen their veggies. As with the death of any loved one my mind raced with questions about what I could have done to keep my pets from harm. 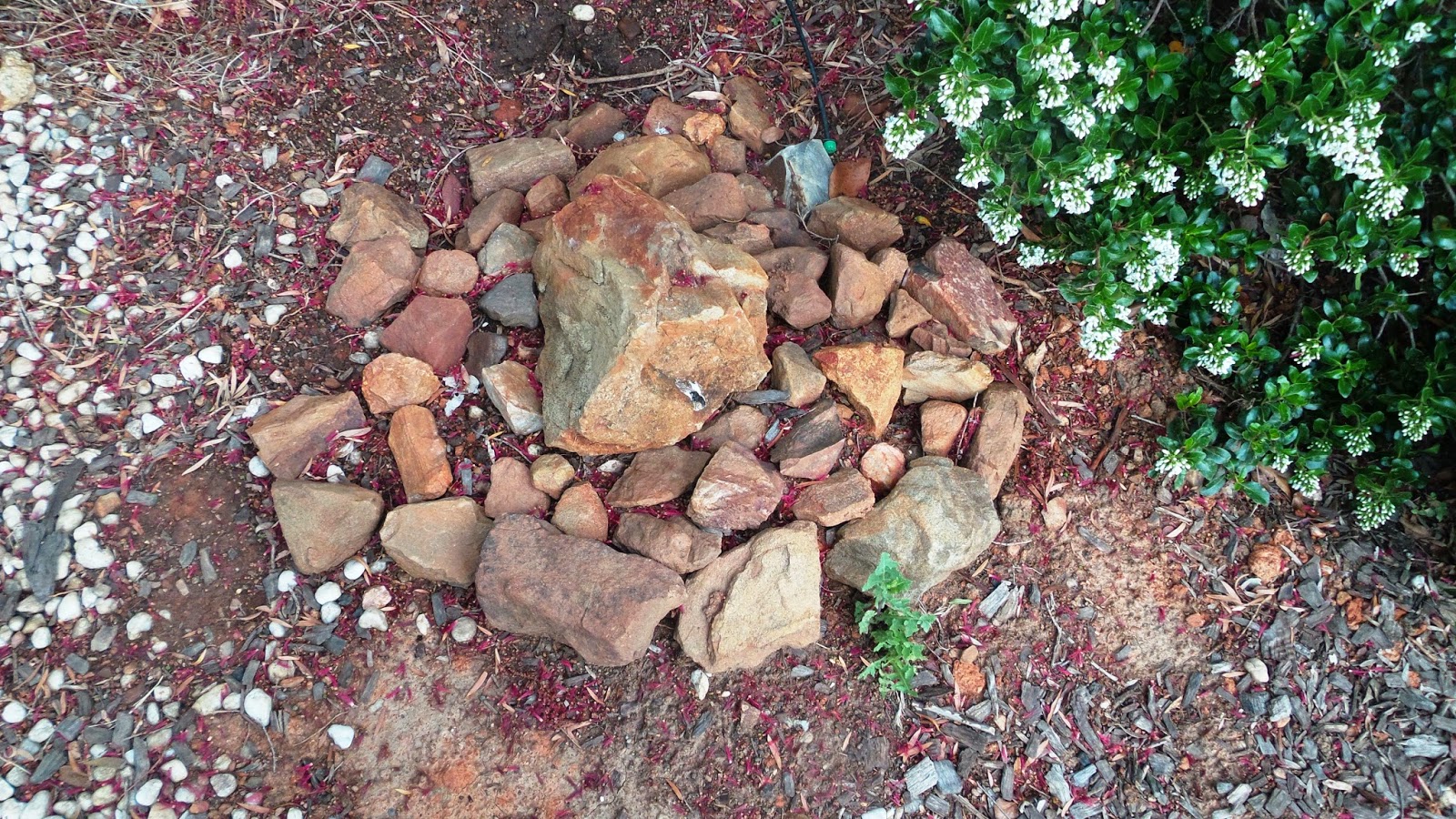 Backyard grave for two of our perished pets - memorial mound of local rock.

As classes,  cats and rabbits are rightly considered destructive introduced  pests in yet this particular cat and these particular rabbits did no damage, they just proved fragile in the face of the perennial dangers of the bush. Should we have introduced them at all? Done so differently? Or, like our sprinkler-addicted neighbours, should we defy the environment because we enjoy the company of our effete European pets?


These questions can’t be answered. All human society is rife with contradiction and compromise. This land is the brown snake’s home and it is also home to Maltese terriers, McDonalds drive thru,  alyssum borders, fancy garden statuary from Bunning’s and now also home to our 'rescue' new cats. We hope that,  like currency lads and lasses, being Wagga born, they may be prove more robust in this environment.

Whatever comes there will be sadness and there will always be consolation amongst the willows and the now reintroduced river oaks of Wollundry Lagoon. 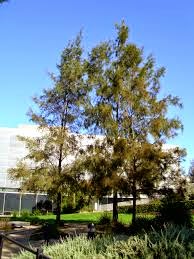 *Have contacted Editor of the Daily Advertiser to try to trace author with no success.

Oh dear, that is very, very sad. More information on the rabbits, please.

We kept our three rabbits in a former aviary. One day the youngest one, Stuie, tunnelled out and led an escape. He survived but we found Brian back in the enclosure dead a day later. I found Doris's body outside our back fence the day we were burying Pandora, our cat who died from snakebite. Truly one of the grisliest week's of my life. But time, new puss cats and the many other joys of life we are experiencing help the healing.