[Note: please forgive the varying font sizes and formatting issues - have run out of time to try to fix them - will have another go later]

There is a phenomenon known as pareidolia which means perceiving vague or random stimuli (usually images or sounds) as significant. It often takes the form of ‘seeing’ a familiar or meaningful image, such as a human or animal face, in a random pattern or object, Jesus on a slice of toast and animals in cloud formations are examples. Since our brains are programmed to discern faces it isn’t surprising that they feature so prominently in examples of pareidolia.


The drive to see patterns in a field of random  data is apparently  biologically useful as it enables us to pick out food, friend or foe against a background where they would otherwise be camouflaged. It also helps us to learn recognition from our previous encounters with things by creating our own mental stock images files. Unfortunately it also makes us credulous enough to see apparitions in blurry photographs and images of the Madonna in Coogee fence palings, to say nothing of spotting life on Mars! 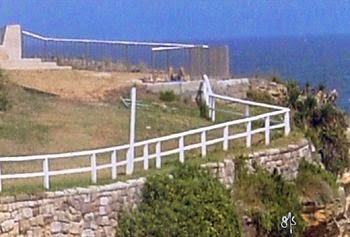 'Vision' of the Virgin Mary appearing at Coogee, NSW in 2003 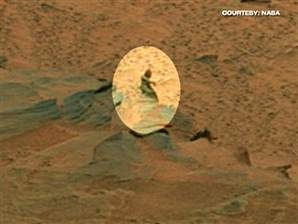 The so-called Mermaid of Mars

Pareidolia can be a shared experience, like group sightings of ‘ghosts’, or individual like our personal interpretations of Rorschach ink blots. Cultural and individual frames of reference always come into play i.e. your own preoccupations will influence how you ‘read’ the pattern. As one blogger drolly put it, “one person’s Virgin Mary …, is another’s Darth Vader eating a giant sno-cone” (http://skepchick.org/2014/01/bad-chart-thursday-the-pareidolia-plot/)

In the religious pareidolia pantheon Renaissance costume is much preferred -  robes and loincloths abound. Those privileged to see visions of the Virgin Mary and Jesus Christ cannot enlighten us about the actual appearance of the revered ones but can often cite the exact painting the image resembles.  Funny that! 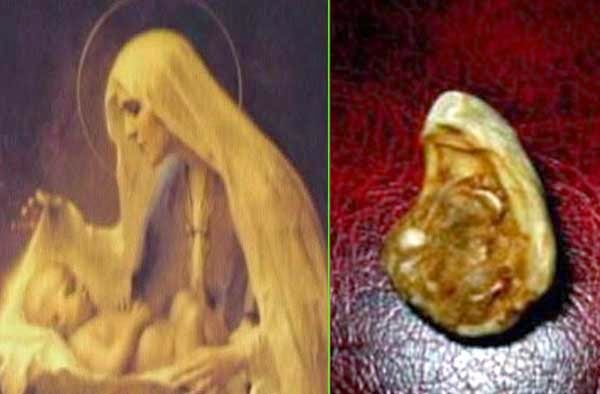 Uncanny likeness - in this instance the Virgin Mary based her rocky manifestation on a romanticised, very anglo 19th century painting.

Our interpretations of cloud shapes tend to be limited to a stock range of creatures, generally horses, sheep, bears and bunnies, I could not find any pictures of cloud formations resembling Nissan hatchbacks or Nespresso machines but perhaps, unlike the photographers, I wasn’t looking hard enough. Of course picking out shapes in clouds is a great deal easier if said clouds are helped along by the artist’s hand as is the case in the 62nd episode of Disney’s New Adventures of Winnie the Pooh where Christopher Robin and Pooh see a cloud-formed whale, a honey pot, a bee, a pirate ship, and a dragon. I guess it isn’t pareidolia if the image is deliberately drawn that way. 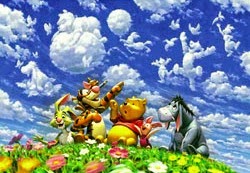 "Spooky, Tigger, the fluff is out there".

Back in the early 17th century Shakespeare arranged for Hamlet to tease Polonius about the ephemeral and subjective nature of pareidolia in this exchange:

Polonius doesn’t want to contradict the wayward prince so makes a complete fool of himself.

Millions were prepared to make a collective fool of themselves in 1968 - 71  when lights appeared in the sky near the Coptic Orthodox Church of Saint Mary in the Egyptian town of Zeitoun  and were perceived as manifestations of the Virgin Mary.  The fuzzy splodges that they attached this significance to are about as like a female form as this McNugget is like George Washington! But hey, no room for Ockham’s Razor when you’re confirming centuries of  superstition. (Good post about it here: http://skepdic.com/zeitoun.html). 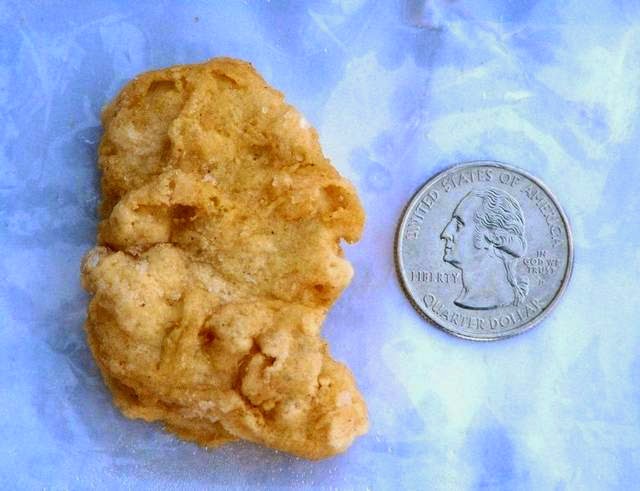 Alarming likeness, it's as if this McNugget was totally channeling old Georgie.

So Jesus himself, his mum and various mammals are traditional pareidoliac sightings but other cultural icons get their share of attention from our pattern insistent brains; Lenin on a shower curtain, Mickey Mouse on the surface of Mercury (what, not Pluto?),  Kate Middleton on a jellybean and, most recently, Barack Obama on that good old standby a slice of toast. 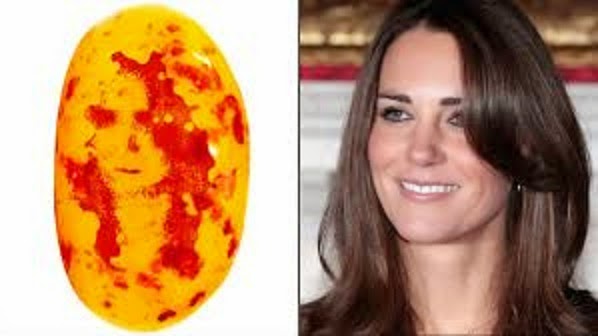 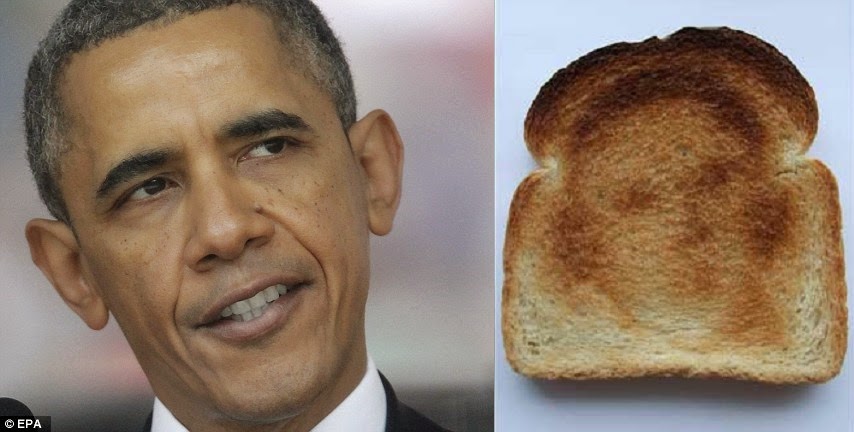 Some instances of pareidolia are quite personal and specific. As a child I lived in my grandmother’s terrace house and at the spot where the top of the stair banister met the floor of the landing I  clearly saw  a grimacing face  in the cornice. As I was carried up in an adult’s arms I would come very close to this image, which I dubbed ‘the ceiling eye’,  and get frightened.  My father  plastered over the offending vision but like believers in demons everywhere I was convinced it still lurked unseen. 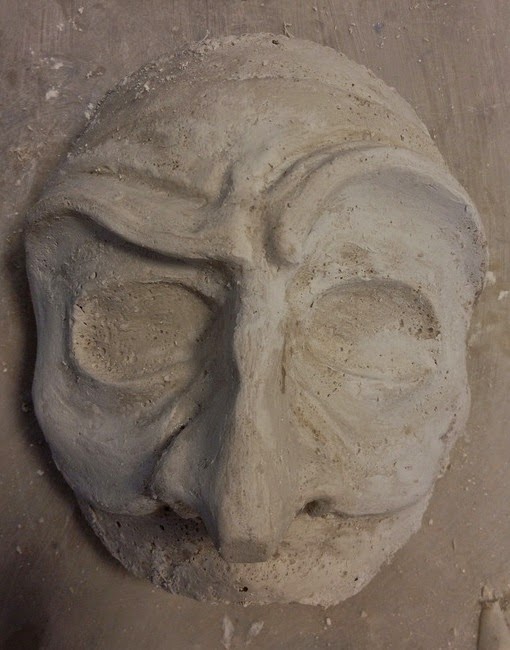 Not 'the Ceiling Eye' but with pareidolia near enough is good enough - always!

Pareidolia has its lighter side. My favourites are functional objects that have cute little faces a la Wall-e. They abound on the net. Here are a couple I really like: 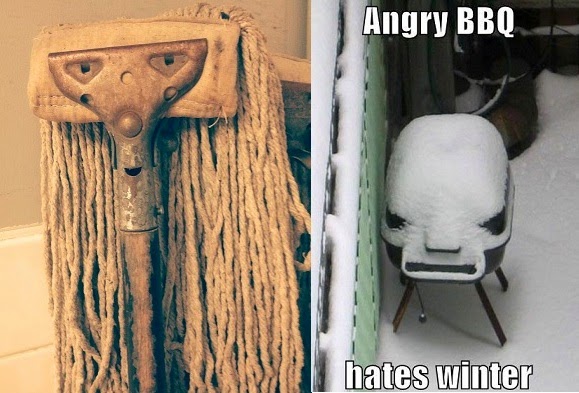 Sometimes, as with Pooh’s clouds, a little artistic licence helps. Here are some I prepared earlier. 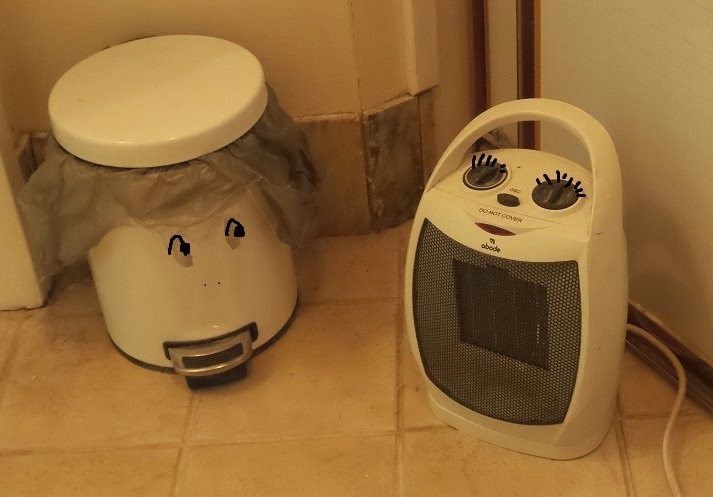 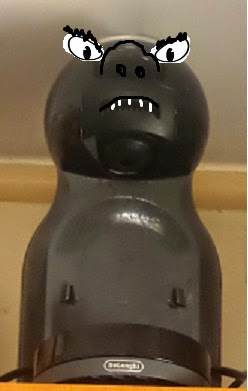 So, happy solo or collective hallucinations! Try to expand the popular repertoire. Elvis seems to be the only pop star to have manifested himself - in  a tree and a rock (google him). Where are the Britneys and Bonos? Mother Theresa  appears in a cinamon scroll (definitely google her), but there is no Mary McKillop lamington vision yet recorded. And why should Disney get all the publicity? How about Homer Simpson in your bathroom tiles or  the surface of the moon? Post your discoveries, you may start a cult!

I love your brilliant and funny observations and writing

Thank you kindly #1 fan (cheque's in the mail).