Some things to crow about – my first weeks in Wagga Wagga 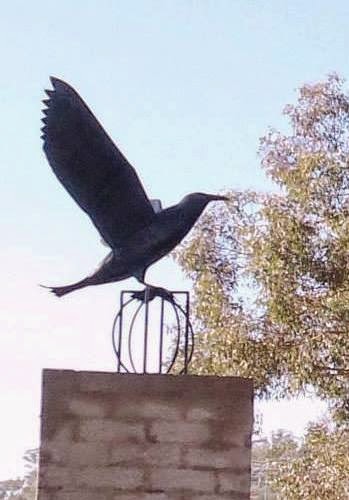 My family and I have made an unexpected tree change.  Dwellers in ’s inner/south west for over forty years (the kids half that time), we now find ourselves about as outer west from as we can be and still be in NSW, living in Wagga Wagga!

This opportunity – like so many other events - came along while we were busy making other plans. We were set to renovate our house. My son and I were within coo-ee of finishing degrees at universities. At work things had got more engaging than they had been for  a long time. My new book group was going swimmingly and my swimming arrangements were going by the book! Then the chance to relocate came in the form of a job offer to my partner. There wasn’t a huge decision making ‘window’ available to us. Basically we saw Wagga (the singular is acceptable here) in June, liked the town very much, and he  accepted the position in July. By September he and our son were ensconced and a month later our daughter and I had joined them.

I have a tendency to idealise the new and our brief foray into the Riverina district had yielded nothing but positive impressions. A concert of European chamber music performed by members of the local conservatorium,  one of opera ‘hits’ performed by the Cantilena Singers, a divine lunch at Harefield’s Winery and  excellent exhibitions of portraiture and  prints at the regional gallery -  all these made me sure that I was moving to a cultural hub. I even checked out the local aquatic centre on my first visit and felt confident I could maintain my exercise regime. 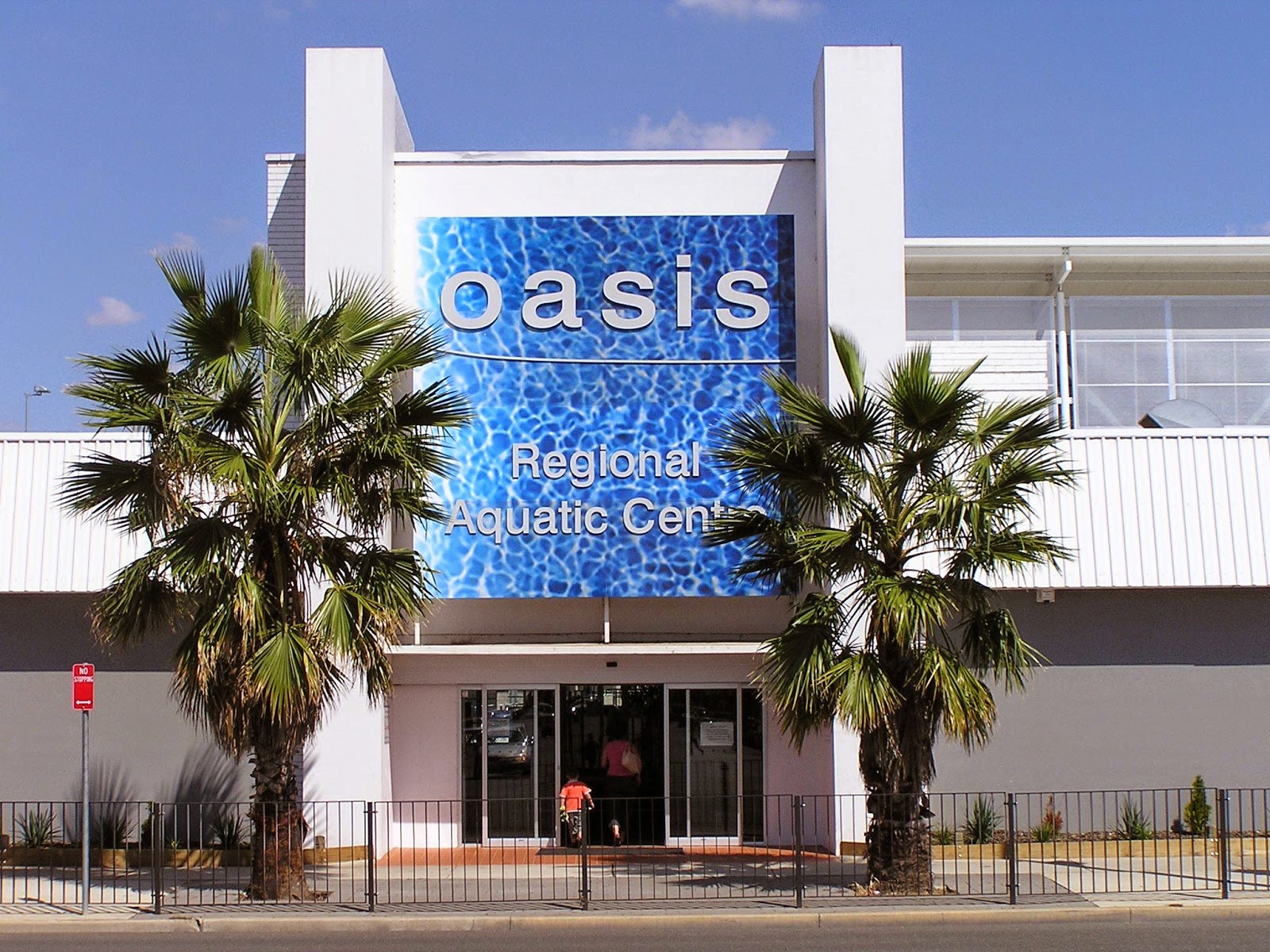 The reality of relocating is a mix of tedium and tumult! Packing and unpacking  the possessions that four people have taken several decades to accumulate feels endless.  Deciding where to put the telly, the towels and the teacups takes several attempts. Achieving things when your routines are shattered is a challenge. The process of settling is definitely incremental as some assumptions are tested and unexpected pleasures present themselves.

The insect life. The only cockroaches we have seen emerged from the boxes we brought; they enjoyed their holiday for but a few seconds. Moths abound  - large buttery coloured ones that commit suicide against walls, blinds and windows. Millipedes were also abundant to begin with (my daughter swore they plummeted from the ceilings), but they seem to have gone to ground now. Flies are plentiful but must have a death wish as they become concussed then inert very quickly when they get into the house.

People strike up conversations and welcome you to the district. Everyone told me to expect this about living in the country but it is delightful to find out it is true. There is a general bonhomie about simple exchanges over buying groceries or coffee. One couple went as far as to come up to my daughter to say they had just seen her being interviewed for casual work, thought she acquitted herself very well and wished her good luck.

Almost everywhere takes about 10 – 15 minutes to get to and you can park easily and for free when you get there. The exception so far has been Tarcutta. We drove for 45 minutes to go to their markets (advertised as being on the 2nd Saturday of the month) only to discover a ghost town. ‘They have ‘em to coincide with truckies’ memorial’ was the cryptic explanation of a laconic local. Apparently Wagga Council knows as little about ‘truckies’ memorial’ as we do, we went on the basis of their website.  An area for future research… or not. 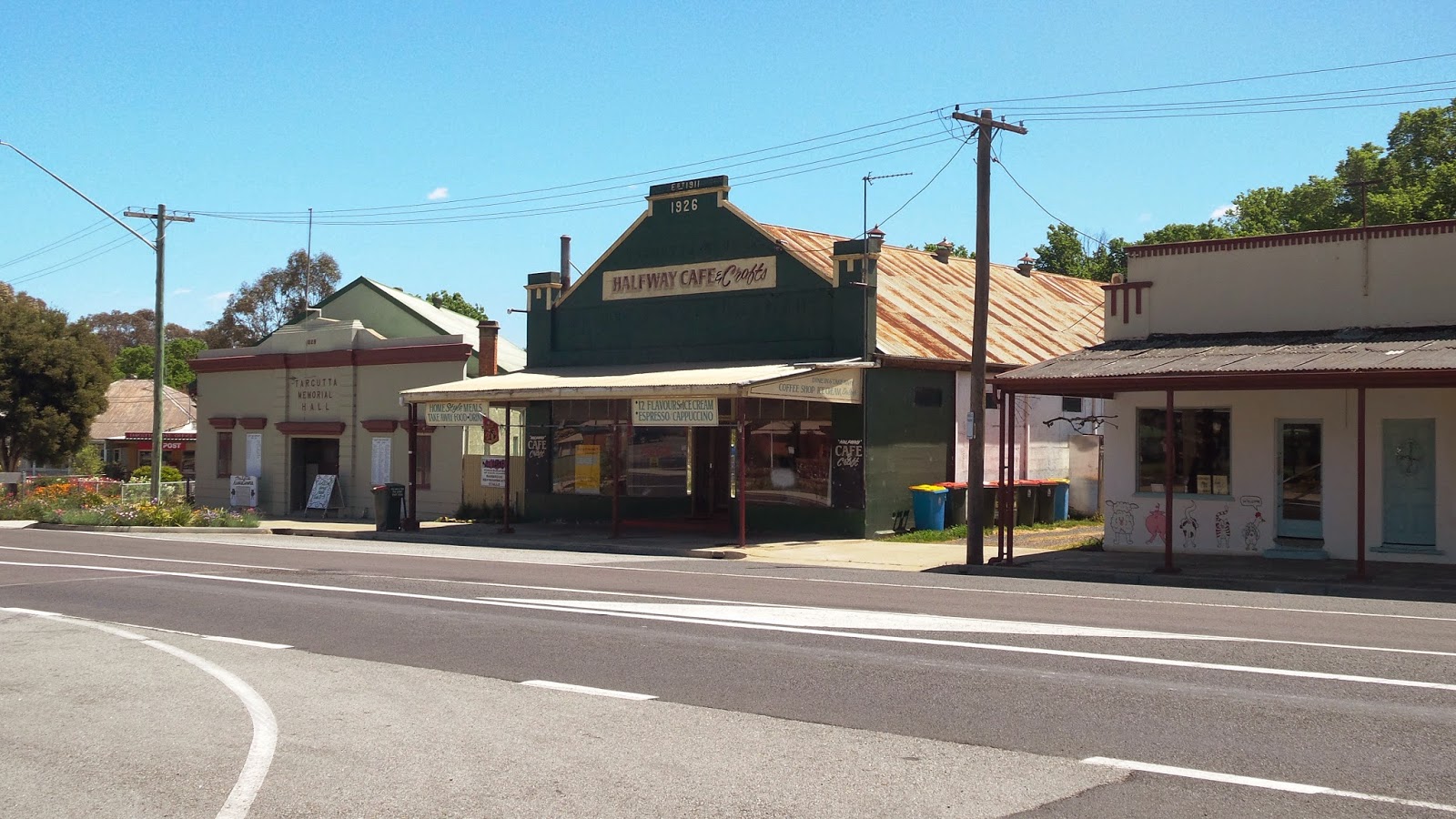 The Children's Medical Research Fundraiser Fair at Murrumbidgee Turf Club did  live up to its publicity. Delightful stall holders for whom close enough was fine when paying for goods (when did I last experience that in ?) and a marvellous setting that my phone pictures didn’t do justice to. The place was imbued with the scent of multiple rose bushes – not the kind of aroma I had expected at a race course!

Impressed by the performing arts scene as a visitor I didn’t hesitate to get tickets to a couple of current productions:  the  School of Arts Community Theatre’s Airswimming and Charles Sturt University Theatre Ensemble’s  Alice in Wonderland. Like everything here they were playing in the Civic Theatre precinct, the former in the basement theatre, the latter outdoors in the Wollundry Lagoon amphitheatre. Ignorant of reputation my hopes for Airswimming were modest but this dramatisation of the real story of two women committed to a mental hospital on the grounds of ‘moral imbecility’ in the 1920s and not released until 1974 was a knock out and contained many more laughs than this description suggests! 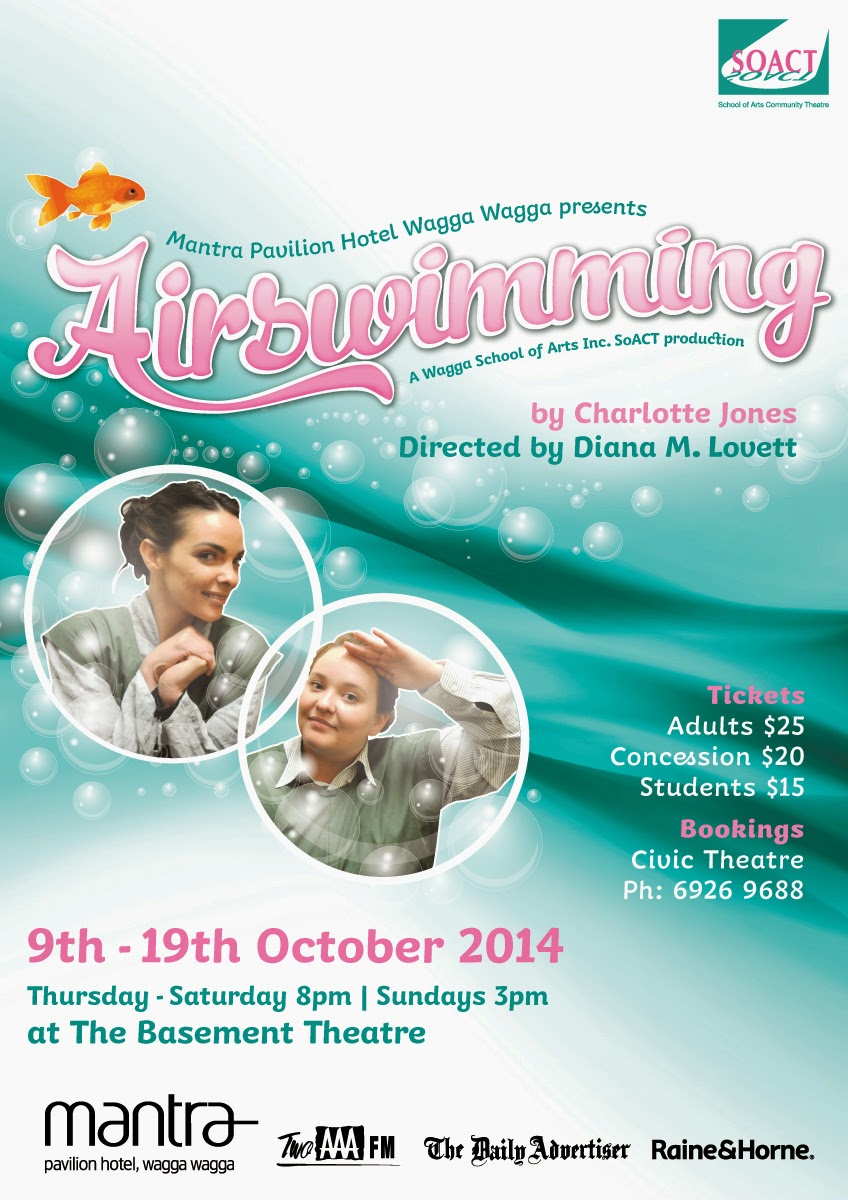 Poster for Airswimming - an excellent production by SACT


Here is not the place for me to detail the disappointment I experienced at seeing a group of  over confident youths mutilate Lewis Carroll’s  immortal classic. Suffice to say I deserve a medal for staying seated throughout the torturous two hours and definitely deserved the excellent dinner we had at Romano’s afterwards. I guess buying theatre tickets on spec is like the proverbial ‘pig in a poke’ wherever you live.


My kids were kept awake by the sounds of a frog whose voice was something like the twanging of banjo strings emanating from the fishpond beneath their windows each night. To my dismay we discovered a sort of leopard print froggy amphibian drowned in the swimming pool one day. I retrieved it with a net and disposed of it thinking we had lost our nocturnal serenader but it has at least one relative who has taken on the gig. Personally I love its call but my room is on the other side of the house.

Some other spontaneous observations: 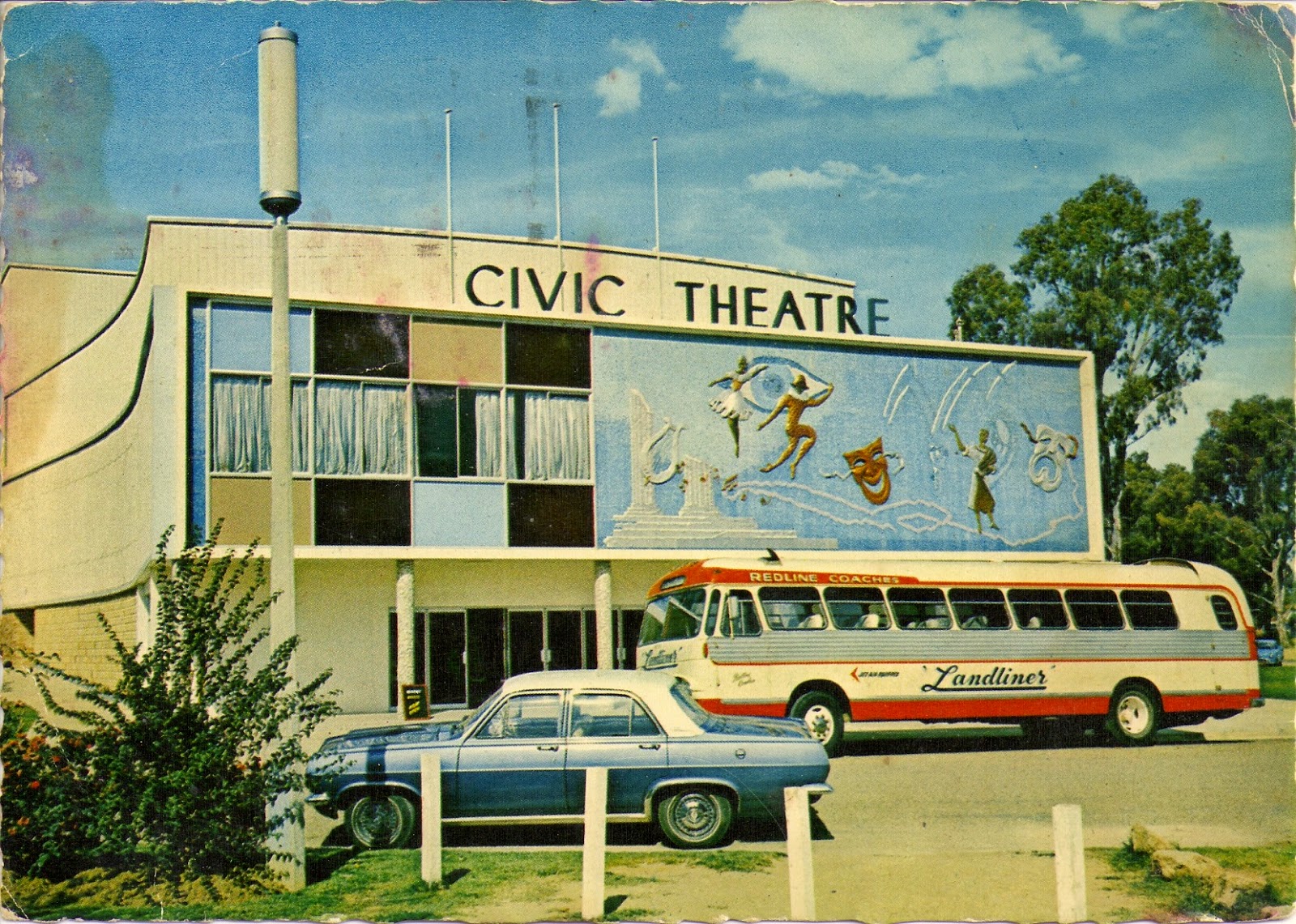 Wagga's Civic Theatre depicted on a 1968 postcard when it was brand new.

We caught the finals of the Wagga Waggafest short film competition in our second week. The theme was ‘winter’ but that was interpreted with great license. Only two offerings included particularly featured the season/weather, there were several whacky animations, explorations of friendship and depression  and, my favourite,  I Ride to Fly about a young girl’s exhilaration riding her pony. The quality of the films and the atmosphere in the auditorium (Civic Theatre again) made it a heart-warming and memorable night and we learned so much about our new location.

We are still collecting our mail weekly from Sydney so need to put in a redirection, meanwhile I was delighted when we received a letter for someone called ‘Darius Crick’ at our new address – sounds  so delightfully rustic. Speaking of rustic,  I haven’t been able to tune my car radio yet and when I try  mainly get both kinds of music – country and western.


My spouse is very content in his new job and has something of a new lease on life. I am fretting  a bit about employment for  the rest of us but this is only week 4 and there are still possessions aplenty  to assign to their places whether those places be onsite or at the local op shop!
Posted by Alice at 4:25 PM