What I learned last year


Well, it is the beginning of brand new year and time to reflect on what 2013 brought and the lessons  I want to take away from it.

2012  ended with me feeling pretty proud of myself for losing weight through participating in  a trial conducted by the University of Sydney over 12 months. For the first time ever we went away for Christmas and experienced the delights of Bembooka but also the disappointment of the Merimbula restaurant we'd booked 6 months prior for Christmas lunch (and confirmed twice by phone) being closed! Embarked on campaign of defaming unrepentant restaurant owner who then had a change of heart and sent us a gift voucher.

January – Discovered that a heart attack can mask its symptoms when, after his third case of apparent food poisoning in as many weeks, a dear friend was rushed to hospital and  told he had actually experienced a series of heart attacks. He was found to have heart arrhythmia and blockages in his arteries and needed a defibrillator and a pacemaker fitted. He almost died but that was a trivial interruption to looking debonair in silk pyjamas and flirting with the nurses.

Lesson: Dwelling morbidly on your own misfortunes and discomforts isn’t always misplaced.

February – Broke my ankle on the way to work and began almost 5 months of impaired mobility, dependency, irritability, muscle atrophy and weight gain. Because of Mr O’Farrell’s enlightened decision to remove workers’ compensation rights in such cases I exhausted every sort of paid leave available to me. I also watched every episode of  Boardwalk Empire and Breaking Bad and discovered the joys of researching and posting about aspects of Sydney’s history on Facebook. 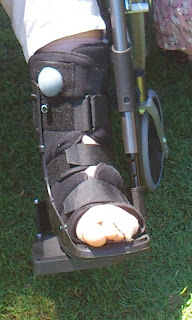 Lessons: Dwelling morbidly on your own misfortunes and discomforts can be counterproductive. There are lots of like minded enthusiasts for archival photographs and obscure anecdotes out there, joining with them to share and publish images and stories is an undiluted joy. Charlie Cox is hot!

March –  returned to full time work after working from home part time for about 6 weeks – transition was premature as I got exhausted and weepy – read that depression after injury is not uncommon. Started on reduced hours. At this stage still travelling everywhere by car, enjoying ‘passive’ recreation like exhibitions, theatre and film but pining dreadfully for proper walks in the park and my beloved aquarobics.

Lesson: Dwelling morbidly on your own misfortunes and discomforts can be unavoidable but remember to carpe diem within your restrictions. 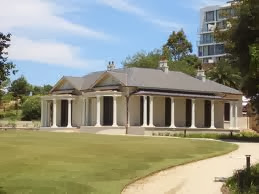 April – Attended a fascinating ‘How to research your house’ workshop at the local library and an open day a Tempe House; visited Elizabeth Bay House and had an informative and amusing guided tour from a new Facebook friend. Moonbootedness prevented me exploring the grounds of these two beautiful buildings but just drinking in their atmosphere and views was really restorative. Continued my historic Sydney research and discovered that there were once houses in Sydney called The Poffle and Toft Monks.

Lessons: Misfortune and discomfort can be transcended by whimsy and humour. Fine architecture and landscape are good for the soul.  You can be an official historic house guide and still make commode jokes.

May –  Had the third of  3  scans showing minimal healing of my fracture – calcium deficiency addressed by taking  ludicrous amounts of Vit D and suffering consequential digestive horrors. Took my first bus trips of the year to attend WEA in Bathurst Street to upgrade my Cert IV in Training and Assessment qualification. Able to stand for long enough periods to start running courses again. Laughed ourselves silly at the slapstick and banter of ‘One Man Two Guvnors’ at Sydney Theatre. 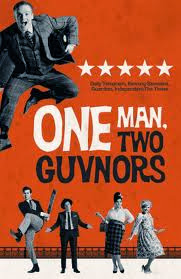 Lesson: Achievements are relative. Catching a bus and being re-accredited can feel pretty good when you’ve been metaphorically treading water almost all year.  You should never let too long pass without seeing some top notch theatre.

June – Fourth month  in the boot, hobbled about at Milson’s Point to watch Vivid far from the madding crowds at the Quay. Decided to abandon  new multifocals after feeling seasick on dry land for 6 weeks and reverted to wearing glasses just for reading and computer work. Reaction could have been exacerbated by my still uneven gait and poor balance. 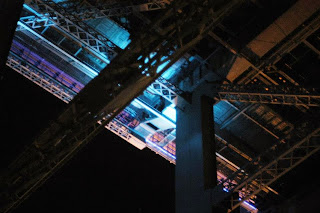 Lessons: Sydneysiders are suckers for light shows and fireworks. Kirribilli looks interesting and I will visit it in the daylight  when I am mobile again. Multifocals are not for everyone.

July – Visited open day St Peter’s Church and graveyard in Tempe, my first visit despite living in the area over half my life. No matter how often you see these churchyards the incidence of infant mortality in the 19thC just blows you away. Speakers donned costumes and assumed silly voices, was reminded that local historical societies are magnets for eccentrics. Recital on church organ included theme to Wallace and Gromit! Became boot free just in time for spouse to be diagnosed with blocked/constricted arteries  to the heart and admitted to hospital for stent insertion. 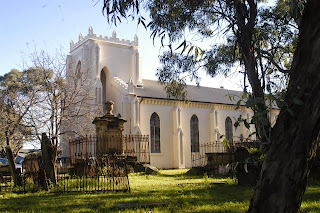 Lessons: A stent makes the heart go stronger. Everyone needs to find their own personal incentive to quit a bad habit, smoking in this case. The theme to Wallace and Gromit is a fine piece that belongs in the repertoire of all serious musicians.

August – Back at uni and the reading fairly demanding. Luckily post grad students can access almost everything online. Perfected surfing various heritage sites,  UTS Blackboard, Facebook  and Scrabble in  quick succession  whilst ‘studying’.  Discovered Prouds/ Angus & Coote watch and jewellery repairer in the Dymocks building – revitalised my watches including an art deco one purchased on eBay.

Lessons: Rejecting  the throwaway society and get things repaired is very satisfying. The motifs in the Dymocks building tiles are NOT swastikas.

September  - To Canberra to see the Turner exhibition and to try to ignore the Tony Abbott/Kevin Rudd contest. Largely successful. Saw the old Rookwood Mortuary station re-invented as All Saints church in Ainslie.

Lessons: Turner is quite phenomenal in being a technically brilliant draftsman and also able to paint in an entirely atmospheric style. It isn’t an exaggeration to invoke him as the major link between classical and modern painting.  Rejecting demolish and re-develop Sydney culture and recycling beautiful architecture has very satisfying results. 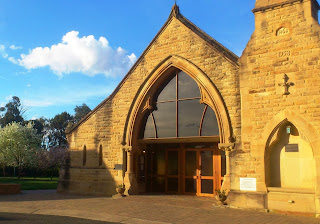 October – For my Masters in Adult Education observed family  lawyers running their advice service at Parramatta Courthouse for 3 hours. Had to make ethnographically detailed notes of my observations.

Lessons: Watching how meaning and learning are produced in the moment by talented professionals in action is revelatory. Keeping chickens in a courthouse courtyard has a very calming affect and  gives employees access to free range eggs. 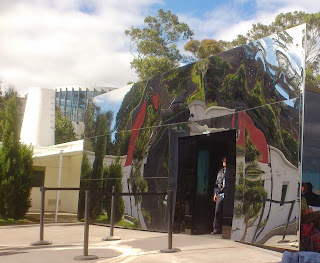 Lessons: Having a boss who says you remind him of Joan Plowright is quite flattering and motivating.  Environmentalism and barista skills are well established in the Apple Isle. Be it ever so humble there’s no place like home.

December – Visited Rouse Hill House on a very hot Saturday. Felt strangely unexcited about buying Christmas presents for a hotch potch of grown ups. Got my uni results – received a distinction for the family/lawyer chicken report.  Lunched at an open restaurant on Christmas Day. Hosted a barbecue for family and friends on 29th

Lessons: Rouse Hill House is REALLY worth visiting – it is unique in containing the furnishings and effects of 6 generations of a single family. It contains a bespoke wallpaper frieze and  a framed photo from the family collection featuring Banjo Patterson and Breaker Morant! Without young kids involved  Christmas Day becomes quite ho hum. The best get togethers are the ones put together through  love and instinct. 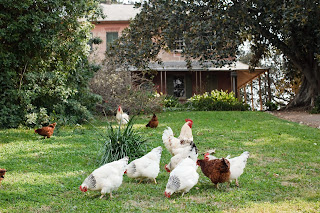