Throw another dead fish on the concrete…

Australians have a reputation  for loving marine cuisine – witness Paul Hogan’s (infamous) ‘Throw another shrimp on the barbie’ tourism campaign. In reality less than 5%  of our weekly grocery budget goes on fish and seafood and that is over twice the percentage we spent on them in the 1970s-80s when Hoges’ campaign aired.  We also prefer the convenience of canned and frozen fish to preparing it fresh.  These days we eat out significantly more than we did 35 years ago;  I don’t know how often we choose fish/seafood when we dine at a restaurant or café but that impeccable source, Wikipedia, claims fish and chips is our favourite take away (I would have thought Thai or pizza). 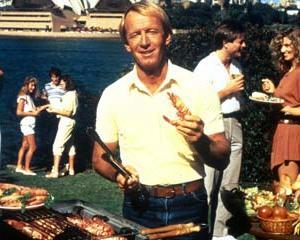 Hoges sure knew how to get a good spot for his barbies!

Sydney’s Fish Markets hold an almost iconic status. No ‘silly season’ reporting is complete without vision or audio featuring supposedly seafood-mad Sydneysiders queuing there at dawn on Christmas Eve to cart away kilos of prawns! Indeed Sydney Fish Markets, besides being the supply hub for retailers and restaurants throughout the greater metropolitan area, attract 3.5 million non-trade visits a year. Many people presumably take their purchases home, but many eat sushi or fish and chips  at the numerous food outlets there.

Last week I met up with some friends from the UK for lunch at the Sydney Fish Markets.  We had been to Doyles, Watsons Bay on their previous trips and we thought we’d give their more centralised restaurant a go. A few things struck me: the fish markets, or what I could see of them (I’m temporarily in a wheelchair) are not picturesque, they have a grotty industrial atmosphere, are smelly and their site seems to be at least 50% crowded car park. The Doyles restaurant is quite prosaic, with plastic chairs and tables and nothing to compare with the ocean views of its eastern suburbs cousin. The patrons on that day were overwhelmingly bussed-in Japanese tourists. 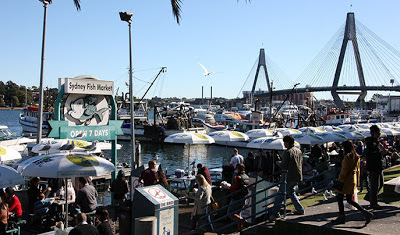 It set me wondering: are the Fish Markets, like the Ploughman’s Lunch, a kind of marketing ploy?  Has a tawdry, semi-industrial precinct been spruiked as a must-see tourist destination  playing fast and loose with Sydney’s actual relationship with its fishing industry?

I decided to investigate…

When the First Fleet arrived in Port Jackson, six months on a diet of dried meat, rice and peas had left its occupants craving fresh food. Of course what they most needed was fruit,  vegetables and protein.  The first category will have to wait for another post. Their protein needs were met initially by roasting rats, crows, even dogs, and the occasional kangaroo or emu, and soon by trading  with the indigenous population for fish.  Aboriginal fishing technologies (e.g. spears, shell fishhooks and small canoes) were well developed and  fish made a substantial contribution to the diet of the Cadigal people.  By contrast, the British colonisers were ill-equipped  and poorly skilled in the fishing methods required to catch Port Jackson’s  580 plus fish species. They may not have had much of a taste for fish either. 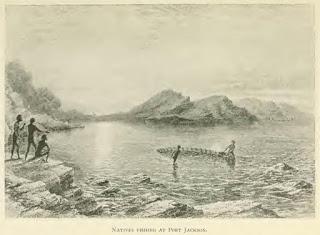 Although we know today that fish is  a good part of a healthy diet and many historical sources remark on how plentiful fish was at the time, the early settlers eschewed fish (and fruit and veg for that matter) preferring to maintain the meat-centric diet of their homelands. Mutton (lamb) quickly became plentiful and cheap while beef and poultry were reserved for special occasions such as Christmas and weddings.

Prior to the advent of steam powered ships, refrigeration and haul net and trawling styles of fishing,  catching fish on a large scale and keeping it fresh was quite a  cumbersome business.  Individual  fishermen sold their catches close to the harbour shores. The fish were often washed in polluted water and sold directly from wharves. They spoiled fast and any attempts to distribute them were made by horse drawn cart in the cooler night time hours. 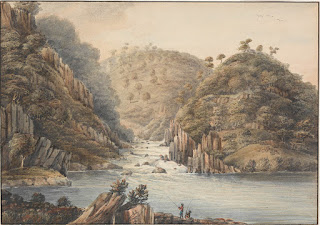 Water colour of European men fishing - early days of the colony (source NSW State Library)
Sydney had no central fish market until 1872 when a grandiose building was erected by the city council  on the block bounded by Forbes, Bourke and Plunkett streets in Woolloomooloo. This commodious neo-classical brick building comprised two levels, with administrative offices fronting Forbes St and a lower building surrounding an inner courtyard. A large central tower with a multi-faced clock and an ornate curved copper hood topped the structure. Over the entrance was emblazoned 'M. Chapman - Mayor' and 'A Market  for the Sale of Fish’. 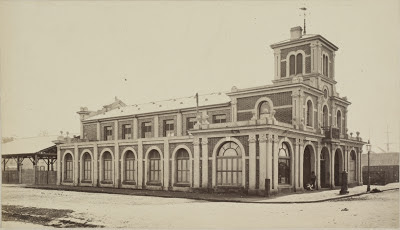 Sydney's first centralised fish markets in Woolloomooloo in their heyday. Exterior (above) and engraving of interior in 1875 with dead fish on concrete (below). Sources: City of Sydney Archive Pix and State Library of Victoria. 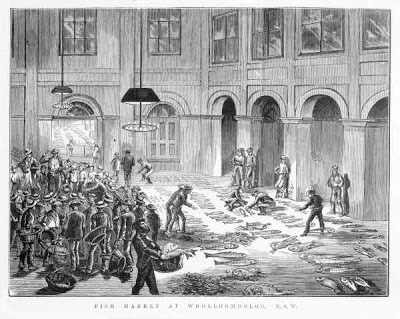 In his book, Sydney Harbour -  A History, Ian Hoskins describes  how fish were laid out in chalk circles on the building’s concrete floor with the fisherman’s name inscribed beside them.  By now ice could be used to keep fish fresh for longer but it is no surprise to learn that in Regency and Victorian society fish was frequently consumed at breakfast time  before it deteriorated.  The short ‘shelf life’ of fish, as Hoskins also discusses in his book,  led many people to eat only fish they had caught themselves. Doing so was clearly a cost saver too.

Because of the proximity to the fish markets, oyster cafes proliferated in Sydney’s eastern  end and suburbs in the later 19thC. Whether the markets themselves had capacity to serve seafood for direct consumption doesn’t seem to be recorded anywhere.  Presumably there was something to draw patrons though  as Shirley Fitzgerald in her entry on Woolloomooloo in The Dictionary of Sydney,  mentions  that ‘fights at the fishmarkets and in the pubs around the wharf (became) daily occurrences’ during this period and  contributed to the social decline of the area.

In 1911, a new Fish Market opened on the corners of Thomas & Engine Streets in the Haymarket area.  The City of Sydney Council photo archive has photographs of  it under construction and by 1919 there was a retail shop attached. Again it is only supposition, but I assume that meals could be had or at least you could buy a bottle of oysters to go. My paternal grandmother enjoyed bottled oysters with vinegar, bread and butter all her life. Her purchases very likely originated from one of the many government–licensed fish agents operating out of the Haymarket premises. However in their mid 20thC incarnation there was nothing inviting about the Sydney Fish Markets which had been modernised to  remove all character and from photos do not seem to feature any retail outlet or eatery. 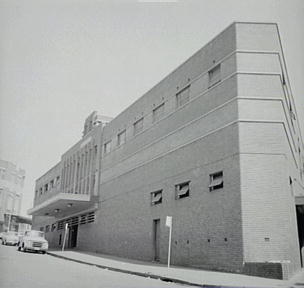 What the Haymarket premises looked like by the 1960s (source: City of Sydney Archive Pix).

Between the two world wars increasing focus was placed on the production of fish for domestic consumption and to reduce Australia’s reliance on food imports. After World War II attention turned to developing the industry for the export market. Lamb remained Australians’ preferred dinner time protein well into the 1970s. I don’t have stats to back this  up but I’d guess that  various waves of immigrants have increased Sydney’s appetite for seafood. It is after all a staple of the Mediterranean and Asian diets. The Sydney  Fish Markets relocated to their current site at Blackwattle Bay in 1966. They were privatised in 1994 . The management trust comprises families and networks of Italian, Greek and Chinese Australians which reflects the central place fish consumption plays in these cultures.

In a recent article on the Fish Markets bemoaning the abandonment of plans to improve them, Matt Khoury lambastes the state government and shareholders, the Catchers Trust and the Sydney Fish Market Tenants and Merchants Pty Ltd, for their lack of attention and to both the aesthetic and environmental aspects of the markets. This is how he describes the market:

While it sells itself as a tourist attraction, the smelly fish market has been an exercise in self-interest for decades. As it stands, plastic seats on metal stands overlook the dirty and aptly named Blackwattle Bay. Heritage falls apart on the harbor's (sic) shore, iron rusts, and there is no foreshore access. Two huge cement factories that dominate the view around the bay pollute the water.

All that is not a disincentive to the 3.5 million annual visitors and is irrelevant to the restauranteurs and suburban fishmongers who source their product from the market.  It will be interesting to watch how the venue evolves and to see if a working market and a tourist/recreational magnet can flourish side by side. 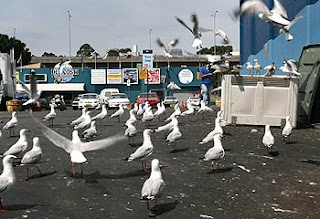 The seagulls like the Sydney Fish Markets just the way they are!
Posted by Alice at 11:28 PM

Well Alice. The charm is exactly as you describe it and a lot of us don't want it to change much. To spruce it up too much will impact on the already hard to find parking spaces and the charges for parking probably increase as a result of it (already too expensive on top of what you spend eating and taking home). We take our tablecloth and cushions to sit on as we prefer the outdoor dining experience. We also take our own wine, utensils, plates and butter. We buy fresh bread rolls from the bakery there, choose our various seafoods and settle in for a couple of hours. We finish our meal with fresh fruit treats from the produce shop at the end of the building. The charm rests with the setting. Yes, it may be old and rusty with the trawlers tied up alongside the wharves. We watch the locals come and go in their own boats and dinghies as they purchase their goodies to take away. Of course it smells fishy. Why wouldn't you expect that from a fish market?? As for taking our own overseas visitors there, it's been a fantastic experience for them all and one they want to repeat.