Imagine no religion, its easy if you try...


In 1966 John Lennon outraged the US bible belt  with this statement:

"Christianity will go. It will vanish and shrink. I needn't argue with that; I'm right and I will be proved right. We're more popular than Jesus now; I don't know which will go first - rock 'n' roll or Christianity. Jesus was all right but his disciples were thick and ordinary. It's them twisting it that ruins it for me."

"I'm not anti-God, anti-Christ or anti-religion. I am not saying we are greater or better. I believe that what people call God is something in all of us. I believe that what Jesus and Mohammed and Buddha and all the rest said was right. It's just that the translations have gone wrong. I wasn't saying whatever they are saying I was saying. I'm sorry I said it, really. I apologize, if that will make them happy. I still don't know quite what I've done."

All he had done was to express his opinion that the words and values of inspiring religious prophets had been distorted by their later interpreters.  His remarks did not cause a kerfuffle in the UK but in the good ole 'land of the free' he outraged thousands. Even the nutter that murdered him 14 years later cited anger at John's comments about Christianity as one of his motives.

Certain middle Americans, apparently discomfited by Danny Boyle's tribute to the NHS in the Olympics opening ceremony, must've been even more ticked off about the inclusion of John Lennon's anthem to pacifism, redistribution of wealth and atheism, 'Imagine', in the closing ceremony. 'Imagine' was performed by the Liverpool Philharmonic Youth Choir and Liverpool Signing Choir in concert with a remastered video of Lennon's own 1970 performance of the song and accompanied by the assembly of a three dimensional portrait of Lennon in the midst of the arena. 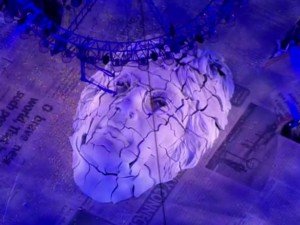 The US of A isn't above incorporating 'Imagine' into their own public spectacles. On December 31, 2011, at Times Square in New York City, the rap artist Cee Lo Green sang 'Imagine' just prior to the ringing in of the new year. He replaced the line "and no religion, too" with the words "and all religion is true". Wonder what Yoko and Lennon's legions of fans thought about that?

Maybe the Brits had their cake and ate it too by featuring Isambard Kingdom Brunel, Mr Bean, Morris dancers, the Spice Girls, the Grenadier Guards, George Michael, nuns with Union Jack knickers, a clutch of Supermodels, Winston Churchill and John Winston Lennon all on the same bill but the slogan was that this Olympics was 'for everyone'. I found the eclecticism enchanting.  And in an age where so much that is violent and oppressive is being done or excused in the name of religion it was refreshing to have secularism and silliness centre stage at the London Olympics.