Sydney: What Lies Beneath

The Paris sewers are rightly celebrated. One of my favourite posts in a friend's blog is about the Paris sewers and I very much enjoyed watching Griff Rhys Jones's illicit tour of their labyrinthine networks in his Greatest Cities of the World series. But I refuse to be cowed by cultural cringe and have delved into Sydney's own subterranean waterways to see what I could come up with (so to speak).

My first glimpse of anything related to Sydney's historic drains was through a perspex case housing the beautifully preserved remnants of a water cistern unearthed during the expansion of the Sydney Conservatorium of Music in the 1990s. It dates from the 1790s and was used as water storage for a bakery on the site. 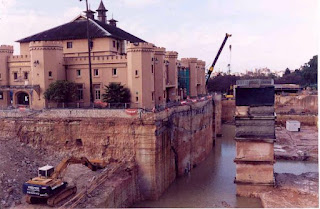 Excavations for the extensions to the Sydney Conservatorium of Music reveal the cistern (right).

My second encounter was wandering through the newly reclaimed and restored Paddington Reservoir. Built in 1878, its limited elevation meant that only the top 5 feet of water from the reservoir could be provided to buildings in excess of one storey, thus it was quickly supplemented by a further pumping station in Crown Street and then decommissioned altogether when the Centennial Park Reservoir came into service in 1899. The structure spent several decades housing a service station and a council works depot until it was transformed to the beautiful airy garden it is today.

But I precede myself. Sydney's first 'sewer' was never intended as such because it was also the cherished drinking water supply which attracted British settlement to Sydney Cove over Botany Bay. I refer of course to the Tank Stream. This  fresh waterway flowed from a swamp near modern day Park Street on the edge of Hyde Park through today's CBD into what is now Circular Quay. To capture water from the stream's variable supply, tanks were built in the position shown on the map below, giving the stream its name. However, after a brief period of purity under Arthur Phillip's vigilant governance, not fencing, nor guards nor fines saved the Tank Stream from pollution. It went from life source to disease fermenter in less than two decades. It was inevitable really as no independent water supply for washing, industry and sewage existed. Pollution and alternating droughts and floods finally ended the Tank Stream's useful life in the 1810s. I quote from the informative Sydney Architecture site:


The Tank Stream served as a dubious source of water for the settlement for a few more years (after Macquarie's time) and was abandoned in 1826. For the next four years residents depended on wells or on water carted from the Lachlan Swamps (Centennial Park) at heavy expense. When the Tank Stream had begun to fail, wells were dug with good results in various places in and near the town...

... In 1860 the Tank Stream was covered from Hunter Street to Bridge Street, forming a four metre by three metre sewer. At Bridge Street this work connected on to an open stone drain which ran along the original course of the Tank Stream through private property to connect up near the present site of Crane Place with the elliptical stone sewer constructed by the City Commissioners and the City Council in 1857. 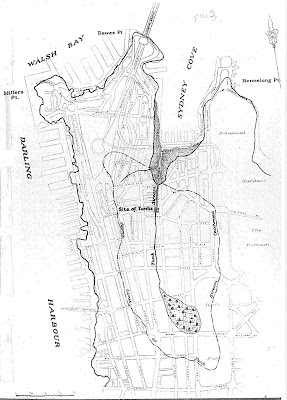 Map showing the course of the Tank Stream superimposed over modern Sydney.

By the mid 19thC the Tank Stream had been progressively covered over until all traces disappeared. It is now a storm water channel controlled by Sydney Water who, in conjunction with the Historic Houses Trust, permit occasional tours (none scheduled currently, I've checked). There are calls for portions of the Tank Strem to be made visible again and its existence has been drawn attention to by a number of commemorative art projects. Most splendid is Stephen Walker's sculpture, Tank Stream Fountain at Herald Square, Circular Quay.

1788 A stream flows into Sydney Cove. The European Settlement of Australia begins along its sandstone banks. Soon drought strikes and storage tanks are carved from the stone. Hence the name, Tank Stream. The Seasons Pass. 1981. The Tank Stream Fountain recalls mankind' s past dependence on this flowing stream and our links with life around the region.


The most prosaic tribute was undoubtedly the now defunct Tank Stream Arcade on the corner of King and Pitt Streets (pictured below in the 1980s). The hoarding covers a stairway which led down to a quaint little section of the MLC Centre where you could sit and eat your healthy Sanitarium* sandwich beside a gaudily tiled cascade purportedly evoking the Tank Stream - searches have not yielded a photo unfortunately. 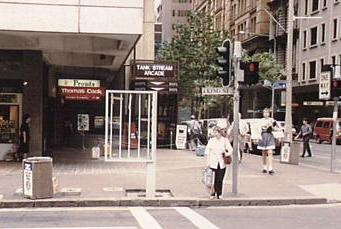 I am not sure if the bar in the old MLC Centre was called the Tank Stream Bar  but there is one now, it's in Tank Stream Way  (only recently so named) between Abercrombie and Bridge Lanes near Wynyard. 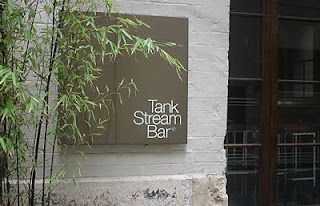 To me, more resonant than any of these is the series of installations in five separate sites in city pavements made in 1999 by artist Lynne Roberts-Goodwin. Featuring two interconnecting lines and hauntingly lit from beneath (when the Council remembers to change the bulb), this is what the artist says about her work:

The Tankstream Artwork, in five separate locations from Pitt Street Mall to Alfred Street, marks the existence of the historic Tank Stream bubbling below the city streets. The subterranean movement of a fine stream of fresh spring water is conveyed through the rippling blue light and accompanying text.

Captain Watkin Tench, Captain of the Marines of the First Settlers at Port Jackson, wrote in his diary about the selection of Sydney Cove as the site for the first settlement. He recorded the presence of water at this site, his vision of grandeur of the settlement, the geographical description of the Sydney valley and the rise and flow of the stream.

Tankstream celebrates the memory of the original stream which started in the marshes where the Pitt Street Mall is now situated, its importance in the founding of the city, finally flowing into the harbour at Circular Quay. 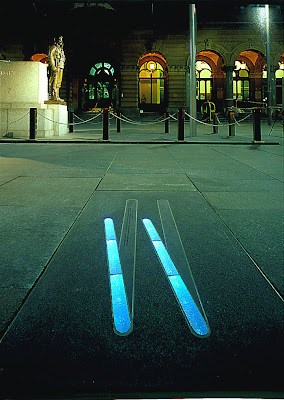 Martin Place site of Roberts-Goodwin's Tankstream Artwork. Other locations are Alfred Street, Curtin Place, Angel Place, Bridge Street and the spot where Pitt Street Mall and Sydney Arcade meet (I add this up as 6 locations but the artist herself says 5).

In 1828 the enterprising mineral surveyor and civil engineer to the colony, John Busby recommended that water from the Lachlan Swamps (later to become the site of Centennial Park) be delivered to a reservoir at Hyde Park via a tunnel or 'bore'. The project was still unapproved when tunnelling began in  1827 but was soon recognised as indispensable and afforded Busby a nice pay rise.  Built by convict labour, mostly through solid sandstone, and varying from 0.9m by 0.9m to 3.5m in height, Busby's Bore was  supplying Sydney with about 1.5 million litres of drinkable water per day by 1830. It's route was from the Lachlan Swamps (Centennial Park) to Hyde Park and its existence is marked today by a commemorative fountain in the latter park. It is however, in the wrong place, the actual outlet of Busby's Bore was near the corner of Park and Elizabeth Streets whereas the fountain (pictured) is on the corner of Elizabeth Street and St James Road!

At this point in my research I felt I had waded through enough sewers for a nice chunky post so I will hold on to other delights for future musings. Before I conclude though I must share perhaps my most appealing finding. I have quoted the Sydney Architecture site saying that Sydney's first comprehensive sewerage system was built in 1857 and indeed this is true, but as Anna Wong's compelling Colonial Sanitation, Urban Planning and Social Reform in Sydney, New South Wales 1788-1857 is at pains to point out, there were earlier proposals but their design and material costs made construction prohibitive.


By 1857 Sydney appears to have had both sufficient affluence and effluence to proceed with drainage and sewerage schemes apace. While the city got safe fresh drinking water, outflow and pollution problems for the Harbour, the Cooks River and Bondi were just beginning. Presiding over the engineering work was Sydney's Lord Mayor George Thornton. He it was who commissioned Thornton's Obelisk (pictured) the Sydney equivalent of the London Embankment's Cleopatra's Needle. While recalling lofty antiquity,  the brass capped sandstone obelisk was in fact the first major sewer vent constructed in Sydney or greater NSW. Designed to ventilate the Bennelong sewerage system, historians give conflicting reports on whether it achieved its purpose. Though one contemporary account certainly suggests it ushered air in even if it did not disperse noxious gases as intended: "The Obelisk causes a splendid draft in Pitt-street sewer - the foreman reports it is difficult to keep a candle alight when working in same" (unsourced quote on Sydney Council's media site).


Characteristically Sydneysider's greeted this pretentious monument to their Mayor  with derision and nicknamed it 'Thornton's Perfume Bottle'.  Remaining thematically consistent to the last, Thornton died of dysentery! 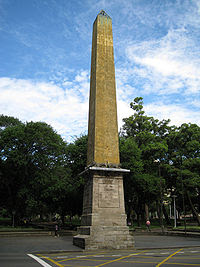 Cleopatra's Needle/Hyde Park Obelisk/Thornton's Perfume Bottle whatever you call it, this structure on Elizabeth Street is an 1857 sewer vent.

* The Quaker health food company, Sanitarium, sold sandwiches, soy milk shakes and other wholesome foodstuffs from a kind of geodesic structure on King Street  a mere pebble toss from the Tank Stream Arcade.

Researching for this blog I chanced upon the delightful  This Isn't Sydney - Spike's walkies blog with swearing & pictures  he covers a lot of the same content and I pinched the wording of Lynne Roberts-Goodwin's  statement about her installation from him (thanks, mate) all other coincidences are coincidental or because of what's out there.
Posted by Alice at 7:17 PM

Excellent post. It's always fascinating to know what lies beneath the modern city. Look forward to more posts.

Years ago I read Unreliable Memoirs by
Clive James and learnt about The Dunny Man which was still a feature of some suburbs until quite recently. I have always wondered where all The Dunny was taken to be dumped and have never found an answer. Do you know?
Love your post, fascinating.

There are lots of hilarious stories and cartoons about the 'night soil man', Jean. My husband tells a tale from his childhood of walking up the street with his Mum when he was about 6 and her saying to him 'Here comes Mr Brown the night soil man - DON'T say anything cheeky to him'. He skipped on ahead and when Mr Brown passed his mother she smiled and gave a wave only to be greeted by a stern, cold look. She wondered what was amiss and hurried to catch up with her son who was skipping along holding his nose!