Sharp as a Blade Runner - Do Androids Dream of Electric Sheep?

I could be considered a pop culture retard. I only really appreciated Michael Jackson's enormous talent when  his work saturated the airwaves in the wake of his death and I only got around to seeing the movie Blade Runner after my son  studied it for his HSC last year. Of course I adored it - the 'neo-noir' world it creates, the quirky characters and perfect casting, the disconcerting themes. I hunted down its inspiration, Philip K. Dick's Do Androids Dream of Electric Sheep?, on eBay and have just finished reading it.

While much is recognisable, much is different too. Philip K. Dick,  prescient enough in 1968 to predict the extinction of species, the climatic effects of warfare and pollution,  regulation of mood (not by Prozac but by the 'mood organ') and to countenance interplanetary colonization, remained convinced that a mystical 'opiate of the masses' would remain a major dimension of our lives. So whereas in Blade Runner protagonist, Rick Deckard has fantastical dreams with images of unicorns which can mysteriously be shared or apprehended by others, in the novel Dick posits 'Mercerism', a religion of empathy and perpetual striving against the slings and arrows or literally the rocks, of outrageous fortune.

One of the most whimsical and fascinating aspects of the book which features less prominently in the film is the proliferation of simulated animals. Rick Deckard owns the electric sheep of the  title and keeps it in a pen on his rooftop, others in his apartment block own robotic cats and ducks. One has a live pony and is the envy of his neighbours. Real animals are the ultimate status symbol* and Rick squanders his bounty-hunting fee on a beautiful black goat only to have vengeful android, Rachael Rosen push it off the roof to its doom. Animals stand as reminders of  a natural  life  long ago eclipsed by atomic fallout from World War Terminus. The owls - symbolic of wisdom - were the first to die but most species are extinct in Rick's world hence the cachet of owning one. 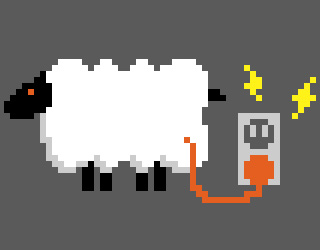 In Blade Runner Rachael Rosen would never murder Rick's pet goat, in fact they become romantically attached (Rick and Rachael, not Rachael and the goat), his wife conveniently not making it to the screenplay. Most of the characters in the book have undergone radical transformations in the film. For example, in the book John Isadore is a 'special' (or pejoratively a 'chicken head') someone who has mental degeneration caused by radioactive dust and is only capable of a very basic existence. In Blade Runner this character is J.F. Sebastian,  a bright technician suffering from premature ageing who, though socially awkward, is clever enough to play chess with the head of the Rosen Association which manufactures androids (as they're known in the book, they're replicants in the movie). And so it goes... Others have written about how the narratives and themes of the film and book differ. It don't intend to go into any more detail here.

What I did want to remark on was how apposite many of the novel's themes and images felt to me personally. A friend of mine used to say that there is a time in your life that is just right for you to read a particular book and that seems to have been the case with Do Androids Dream of Electric Sheep?

When the book arrived our family had just acquired Android mobile phones. I collect owl figurines and am nicknamed Owly by one of my sisters. Goats and rabbits have a special folklore in our household. Cruelty towards - or unthinking experimentation on - any creature repels me and the maiming of a spider late in the novel reminded me of my adolescent anguish at accidentally killing a moth whilst sweeping the floor in our bookshop - it so affected me that I wrote a poem about it at the time. Which all leads me to the double-edged sword of empathy in the book. Under a Mercerist creed, humanity experiences transformative rapture when empathy is maximised via the mood organ but creeping empathy towards androids is almost Rick's undoing. This really resonated with me - I have strong empathic responses to the feelings and situations of others and sometimes  this is a very positive thing for example, in my work and as a parent, however, for as long as I can remember people have advised me to get a thicker skin. One downside of seeing where others are coming from and what they are feeling is falling into the trap of thinking that it is reciprocated. Sometimes it isn't and your goat gets chucked off the roof!

* When Rick asks the price of a pair of rabbits, the animal salesman advises him, "The thing about rabbits, sir, is that everybody has one. I'd like to see you step up to the goat-class where I feel you belong. Frankly you look more like a goat man to me."
Posted by Alice at 9:59 PM

Love this article. Nice comparison between the book and film (or should I say three versions of this film; it's the only one I know of that has two director's cuts). At least all three were largely identical with only minor tweaking as opposed to films like Once Upon A Time In America or Donnie Darko which were reorganised and immeasurably improved when released on DVD (I can feel a blog coming on). As for the final quote - priceless! Interesting that Deckard, like Aleister Crowley, was considered a goat man.