Reasons to be writing - Part 1

I think I have bloggers' block or at least chronic lack of originality. The only ideas I've had have in the past couple of weeks have already been comprehensively covered by someone else. One, influenced by the unveiling of the newly cleaned Central Station clock tower, was to be about clocks on public buildings. David Marr wrote on this subject in his article Their Number's Up in the Sydney Morning Herald on 2 January particularly looking at stopped clocks and their effect on those who may rely on them. 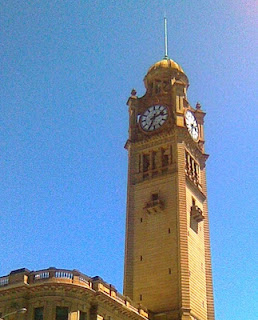 The other was  to be about the ludicrous way menstruation is treated by advertisers. However two highly enjoyable blogs I found while surfing the crimson topic on the net, Ayshfi and Southern Belle Feminist, already have good, comprehensive posts about menstruation - I recommend them. Gruen Planet (nee Transfer) has had lots of good stuff on absurd adverts for 'sanitary products', as tampons and pads are euphemistically known, and I'm sure will revisit the topic if only for some gorgeous Jane Caro eye rolling or withering looks to use in the promos. 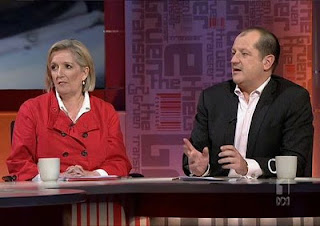 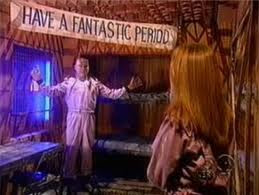 I did find lots of  great imagery and links to funny videos on the 'net, including, on YouTube, a clip from  that wonderful episode of Red Dwarf when Kryten enjoins Kochanski to Have a Fantastic Period.

The 'angle' I had intended to take on the subject was the love/hate attitude society's have had, and still have, to this aspect of  'womanliness', assigning to menstruating women  magical powers or judging them unclean and not fit to worship or take part in other social activities. What got me thinking about the subject this time was a friend posting on Facebook a link to a Sydney Morning Herald article Drag Queen Tampon Ad is 'Transphobic'  about outrage at a  Libra tampon commercial that contrasts the 'manufactured' femininity of a drag queen/ tranny with the 'real' article, a tampon wielding young woman! I suppose it turns penis envy on its head but I think we did that while ago, didn't we? 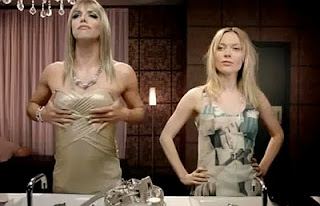 Of course menstruation does preoccupy most women quite regularly  and ironically, contraception, while liberating us from serial pregnancies has condemned us to a lifetime of more periods than all our foresisters! The folklore and superstition around periods just goes on evolving, in India in some sects women wear a red neckerchief when they're having a period and in the 1990s western women were encouraged to wear all white outfits or swimsuits and frolic around a lot! At school in the 1970s an 'educational' booklet (published by Tampax I think) was distributed that told us (seriously) to avoid washing our hair when we were menstruating! Any way the fact I have now filled 3 paragraphs about how I'm not going to write about menstruation shows what an all but inexhaustible subject it is (to me at any rate).

All creative writing classes though, remind us to 'write what you know'. So maybe if I want to avoid being derivative or gazumped I should stick to writing about stuff  that is unique to me and my world. In which case watch this space for:
*seeing faces in things
Posted by Alice at 10:28 PM

Genius. A blog about what you're not going to blog about, buttressed by a blog about what you could possibly blog about in the future, maybe. When and if I ever get to the stage when I run out of things to write about (although it has been two months since my last - a combination of pressing deadlines for rare paid work and researching multiple blogs at once), I'll definitely consider this approach.

Glad to hear it - it is both post modern and delightfully self indulgent. You'll enjoy it.

Look forward to some of these blogs. We need more informed discussion on Eric and Ernie. Found a second-hand store in Newtown with a heap of Morcambe and Wise publicity photos. They were ridiculously cheap so I just had to purchase a couple.