I had a digital mishap this week. On Monday morning at 11 am I plunged into Roselands outdoor pool without remembering to take a ring off my right ring finger. In the chilly water it immediately started wobbling about and threatening to descend to the floor of the pool. Surrounded by approximately 700 primary school kids either learning to swim or consuming their morning tea on the bleachers, I decided not to risk putting it on the edge of the pool and quickly transferred it to my middle (or 'rude' as the kiddies are wont to say) finger. I did my aqua class with the usual verve, grace and energy and thought nothing more about jewellery, except for quickly reinstating my earrings and necklace, before meeting my spouse for lunch in the ambiance-drenched Roselands' food court.

Fast forward to that evening. Oh dear, the ring will not budge. Oh dearie dear, it is stuck. Perhaps a night's sleep will relax its hold. Faster forward to the following morning, the ring is well and truly a fixture below my bulging knuckle. Any amount of baby oil, handcream, sorbolene, soap, cooking oil, Vaseline will not work it loose. Maybe the icy airconditioning at work will deflate the offending swollen digit?

Faster forwarder to that evening, what an attractive indigo colour the middle finger of my right hand has become. Soaking it in iced water does not help loosen the ring or reduce the swelling. Emergency department of Canterbury Hospital here we come... 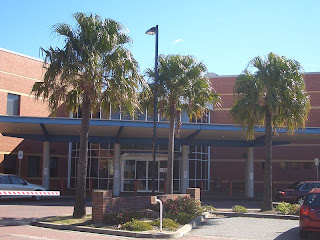 Main entrance of Canterbury Hospital, Emergency is just to the right.

I was lucky, triage was over in a trice and a lovely African doctor who called me 'my dear' in tones of plushest velvet was attending to me. Off he went to get the ring cutter leaving me time to take in the atmosphere of the treatment room with its wealth of useful drugs, dressings, equipment and reference material, overflowing bins and chocked open fire door.
﻿

﻿ ﻿﻿
Turns out that this initial speediness produced an undue confidence that I would be home in under an hour, or two hours, or yet two and a half. My ebony friend had a fruitless search for the ring cutter. Someone who didn't work there any more had put it somewhere. You know how that happens... My spouse checked out 2 local medical centres - no, neither had a ring cutter. I returned to the waiting room to be distracted from the final pages of Stephen Fry's memoirs by more combinations of leggings, thongs and Supre T-shirts than I realised were possible and examples of maternal behaviour that made the ethical conundrum at the centre of The Slap seem entirely redundant!

I was recalled and Nathan* the senior nurse practitioner took over my case. For the third time I outlined how the ring had come to be stuck. Nathan thought we should not delay in finding another hospital whose emergency department had, and could locate, a ring cutter. He got on the line to St Bodolph's*, got cut off while being transferred to his opposite number there, then asked to be reconnected and finally got to talk to Liz*. Liz is apparently a sarcastic bitch! I had ascertained that from hearing one side of the conversation, but Nathan confirmed it, then quickly apologised for his lack of professionalism, after he hung up. We had a hearty laugh.

Nathan did not think that removing a ring from the finger of a 55 year old woman was a particularly appropriate use of the Fire Service's resources but what choice was he left with? Dialling triple 'O' seemed like overkill. We went to Nathan's office and googled the number for Campsie Fire Station. Nathan got their voicemail. I was glad I wasn't alight.

Nathan recounted an anecdote from his wife's working week. She fills a similar role to him at another hospital. Apparently a patient who breathes using a mask and an oxygen tank snuck out for a cigarette, lit a match and virtually self immolated. His face pretty much melted. What my son would call 'natural selection in action'. We had another hearty laugh.

Nathan said he would give finding the cutter one more try and I was left to take in the atmosphere of his office with its wealth of reference materials, safe practice charts and books, including a human anatomy colouring book which, if completed authentically, would employ a monotonous four colours (so no need for the boxed set of 72 Derwents that was the pride of my childhood for the sons and daughters of medical staff!)
﻿ 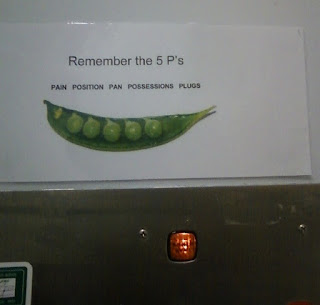 ﻿I felt fraudulent not to require any of the 5 Ps but I will definitely try to remember them.


Hallelujah! Nathan checked the plaster room on spec and there was the ring cutter. Some people do not have the ability to look for things properly he said. As the matriarch of my household I could not but agree. I told him he was a hero, a marvel, a wonder, even before he set to work. Approximately ten minutes later we were returning to our car the severed ring in the side pocket of my handbag. My husband thinks he can smooth off the ends and I will still be able to wear it but I am a bit out of love with it at present! 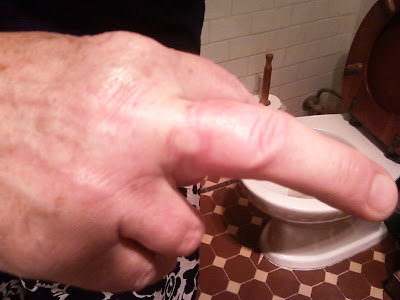 Well the drama is over and my finger is almost back to normal. Perhaps I am an alarmist. I start a weight loss program the second week in January and no doubt the ring would have fallen off if I just waited until February.

*Not their real names.