The ABC program The Collectors has finished, at least for this year, perhaps for good. I guess there are only so many collections and collectors in the country they can showcase.  The penultimate edition of the program was given over to a tour of MONA, Tasmania's privately owned Museum of Old and New Art. That's the museum I had some difficulty navigating back in June.  The TV coverage made me realise that I had seen only about a fifth of its collection and whetted my appetite to return. It also convinced me I need to practise using iPhone technology a bit before I do.

Gordon Brown interviewed MONA's founder, David Walsh and asked him the 64 thousand dollar (considerably more in his case) question: 'why do people collect?'  His answer was a bit of a revelation to me. He said that surrounding ourselves with objects we invest with significance is a religious act.  I thought of Randolph Hearst's San Simeon,  Philip Adams's Egyptian artefacts, I thought of  the 50s fetishists, the tin toy tragics, the cricket cards of yesteryear collectors and I thought of my own preoccupation in recent years with finding objects that relate to my UK childhood - Sylvac figurines,  postcards of  holiday locations, pieces of Spanish Garden dinnerware that match my first 'grown up' cup and saucer.

I don't know whether Walsh's theory fits every kind of collection/collector, but it certainly has resonance for me. I can see the relationship between what I have been collecting, when I began collecting it and how that has fitted with my journey of identity and belonging. 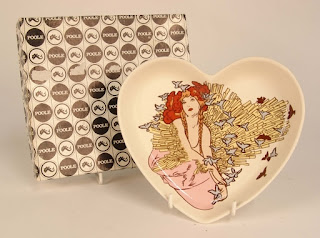 Above: 1970s Poole pottery with stylised Alphonse Mucha design - the height of pop art decorative kitsch. I found a  vase  in a bric-a-brac shop in Newtown some 30 years ago and now have 6 pieces.

In the 70s objects, cards, posters, books & clothing featuring the designs of Alphonse Mucha, Aubrey Beardsley and Arthur Rackham held an overwhelming attraction for me. I had posters of their art on my bedroom wall and even stole a couple of plastic brooches with Mucha's art nouveau maidens on them from Coles. I had no money and  kidded myself that because I knew the work featured I had some sort of entitlement. The slightly overwrought decorativeness of Mucha and the tendency to the grotesque of Rackham and Beardsley  must have put me in touch with a bit of old world decadence sadly missing in the world of tie dye T-shirts and lurid panel van art that was the Sutherland Shire. The day my Sussans Aubrey Beardsley design skirt shrank at the laundrette will forever stand as the end of an era for me. 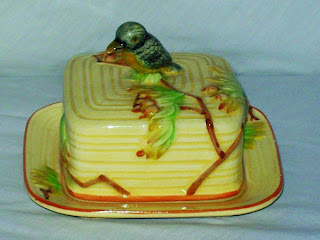 Above: Japanese Marutomoware with Kookaburra & Gumnut design - vintage Australiana from the 1930 - 50s. Again I started collecting when these were considered junk, they are now highly collectible.

In the 80s when we started our life as a couple and had our little gallery in Newtown all was gum leaves and native animals and appropriated Aboriginal imagery. My wedding ring is two gum leaves entwined.  I started buying pottery with eucalyptus and kookaburra motifs, I tried my hand at screen printing, my designs either pinched from indigenous culture or heavily influenced by Margaret Preston woodcuts. I was embracing the Australian side of my identity. 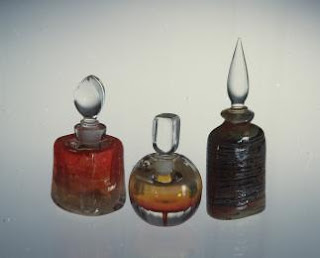 Above: Richard Clements hand blown perfume bottles, these are the Powerhouse's, not mine, timelessly beautiful.

As I seldom discard objets d'art and pictures from previous eras, by the 1990s our environment was becoming pretty eclectic. Framed prints of Lautrec, Cezanne and Klimt adorned our walls and still do. We have also acquired a few original etchings.  William Morris fabrics covered our lounge suite and windows until they wore out and our budget didn't keep pace with Liberty's rising prices. Working at Craft Australia for 8 years I discovered the glass of Richard Clements and Setsuko Ogishi, the textiles of Barbara Rogers and Vivien Haley and the ceramic decoration of Stephen Bower and Jana Ferris. Some modest representation of these artists' work joined our burgeoning collection! 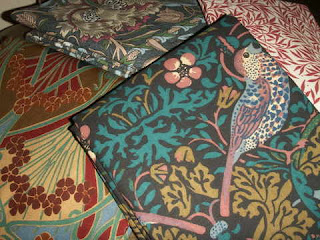 Above:  William Morris textiles, not one design is less than gorgeous. Our first sofa and armchairs were covered in Agapanthus. 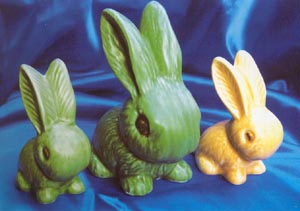 Above: Sylvac bunnies. I remember that my great grandmother had these on her sideboard and television set in the 1950s. Later a collector cheated her out of them for a few pounds.

Unlike most of the collectors featured on The Collectors my focus ranges widely.  I haven't even touched on owls which I have collected on and off since I was a teenager or on my passion for virtually anything connected with Alice In Wonderland. When I arrived in Australia from Britain in the late 1960s I put all my childhood postcards into 3 albums which I still have. They comprise chocolate boxy animal photos, Molly Brett woodland scenes, cutesy images by Mabel Lucie Attwell (and her imitators) and traditional souvenir views.  I still buy and send postcards when I am on holiday or in those shops you need to pass through at the end of art gallery exhibitions, but it only recently occurred to me that I could look online for postcards of my childhood haunts. Of course they exist and now I've bought 5!

In fact the focus of my collecting over the past few years has been making concrete and communicable my childhood memories. Many of the treasured things that didn't make their way out here with the family or which were lost in the mists of time even before we made the trip can and have been restored to me through eBay. Bugger the holy grail,  replacing my Midwinter cup and saucer was a transcendental experience for me! 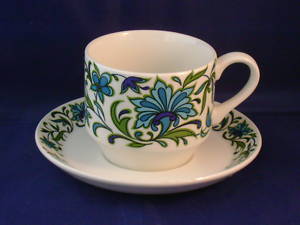 Midwinter's Spanish Garden design. The shapes were designed by the Marquis of Queensbury , not the one who brought down Oscar Wilde, his grandson, and pattern is by Jessie Tait. Mum bought the cup and suacer to be exclusively for my use in about 1967.
Posted by Alice at 11:10 PM

Best post yet. There's certainly a mysterious psychology behind collecting and many of us try to regain our past, and remake it to something we wish it was, in what we surround ourselves with. As a frequent eBay seller, I'm astounded by the things people collect. Certainly the Internet has taught us that we're not alone in our collecting; that there are others out there who have some the same passions and dreams.