You 'avin a laugh?

I've probably expressed my affection for British telly from the 60's & 70s more than once in my blog. At a recent press conference, John Cleese, in Sydney for the Just For Laughs festival (which I sadly missed because of study, disorganisation and poverty, though not necessarily in that order) damned the current state of British television as a sharp decline from its status as the 'least worse television in the world between to the 50s and the 90s'.

The UK TV of my childhood certainly provided a nourishing diet. I cut my comedy appreciating teeth on The Frost Report, The Worker, At Last the 1948 Show, The Likely Lads and Steptoe and Son. I was also, much to my mother's horror, a stalwart fan of the Carry On series of films. I must have seen them on telly as I can't imagine being taken to the cinema to see such coarse, crass entertainment unless my maternal grandmother became my enabler for this 'ever so common' form of entertainment as she did for seaside amusement parks and panto.

Somehow I recently became aware that the BBC had produced a series of tributes to the stars of this era, Legends of Comedy, and quickly adapted my online buying skills, usually dedicated to clothes and china, to tracking down the DVDs. The search became particularly tantalising when I discovered that its highest rating dramatisation, The Curse of Steptoe, had been withdrawn from sale because of a successful defamation action by the family of Harry H. Corbett's second wife.

Well Amazon came through for me, at least I found second hand copies of the DVDs on their site, but then there was some palaver about not being prepared to ship them to Oz. The tyranny of distance had not impressed itself so strongly upon me since 1969 when we arrived and it took 2 -3 weeks to receive an aerogramme and you couldn't buy Callard & Bowsers butterscotch or Branston Pickle for love or money. 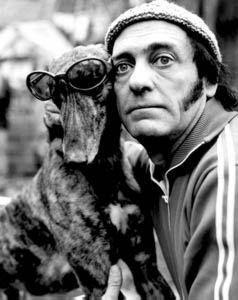 The long suffering Harold Steptoe, Harry H. Corbett with a brindle pup that
looks uncommonly like our Stella.
Kind friends in the UK took delivery of the parcel and re-directed it to me here so I have now watched 'Hattie', a biopic of Hattie Jacques starring Gavin and Stacey's/Little Britain's Ruth Jones, 'Rather You Than Me', featuring David Walliams as Frankie Howerd and 'The Curse of Steptoe' with its inspired casting of Jason Isaacs as Harry H. Corbett and Phil Davis as Wilfrid Brambell. This review from The Guardian captures its tragic magic better than I could. If I have one tiny qualm it is that their lives look so unrelentingly miserable. They must have had one or two moments of fun being in the best written and acted comedy of the day and earning all that money. Maybe not, they certainly both seemed to have been lugging huge, mortifying albatrosses around with them! 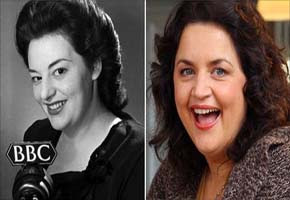 The real Hattie Jacques and the divine Ruth Jones who recreates her with stunning aplomb in 'Hattie'.
Less depressing and a must-see is 'Hattie'. Behind the smirkiness and stereotypes of her Carry On roles Hattie was one classy, sensual broad who had the bittersweet fortune to fall passionately in love/lust with her driver (played by the delectable Aidan Turner from 'Being Human') while still in an affectionate but lacklustre marriage to John Le Mesurier. Ruth Jones strikes just the right note - mixing the excitement of newly realised sexuality with a thoroughly kind and admirable desire to harm no-one and see that everyone is looked after. Too tall an order of course. Your heart breaks for her and Le Mesurier trying to be civilised while living in the most unorthodox of domestic situations.

All the performances are great and the recreation of scenes from Carry On Cabbie, with a subtle commentary on the appalling limitations placed on roles for women, be they 'lookers' or matrons, work beautifully!

Must track down Eric and Ernie next.
Posted by Alice at 7:55 PM

Golden Age of Brit comedy - Peter Cook & Dudley Moore, Frankie Howerd, David Frost and That Was The Week That Was, The Two Ronnies, Steptoe, the Carry On movies epsecially Kenneth Williams and Charles Hawtrey, all the way through to Python. We shan't see their likes again.