Just finished reading Katie Roiphe's Uncommon Arrangements - Seven Portraits of Married Life 1910-39. I can honestly say I romped through this book, my interest in what made these people and their relationships tick never flagged. Amongst the unions caught in Roiphe's amber are Katherine Mansfield & John Middleton Murry, Jane, H.G. Wells & Rebecca West and Radclyffe Hall, Una Troubridge & Evgenia Souline. All her studies reveal exceptional, creative early 20thC minds consciously reshaping or replacing the institution of marriage. H.G. Wells was as much the charming complete bastard I had been led to believe, Radclyffe Hall was one controlling, tory mother f*cker and Vanessa Bell was a surprisingly coy boheme. The relationships that most challenged my received knowledge were those Vera Brittain had with her brother Edward, fiance Roland Leighton, husband George Catlin and long time companion Winifred Holtby. 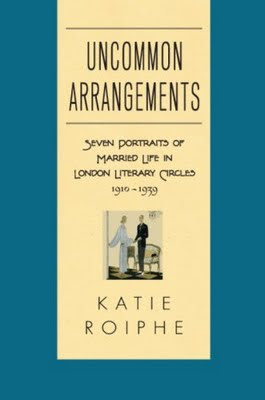 My understanding of Vera Brittain's suffering in love, emerging pacifism and feminist pioneering came straight from the 1979 BBC television dramatisation of her book Testament of Youth in which the delightful Cheryl Campbell created her as the most disarming of heroines. While there was lots to like and admire about the real life Vera Brittain, Roiphe, as she does with all the personalities examined in this book, paints a thoughtful, psychologically credible and drily amusing portrait of a complex human being. It is by no means always flattering but we certainly glimpse the myth making, compromises and to some extent, the self obsession, that can go into becoming a literary and political icon. 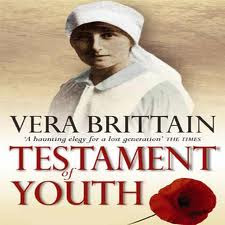 I thoroughly recommend Roiphe's book to anyone fascinated by the Edwardian era and the emergence of modernism in British society. You will enjoy hobnobbing with DH Lawrence, Ottoline Morrell, Roger Fry, Virginia Woolf and Bertrand Russell, discovering their noble and nastier traits and maybe Roiphe's dry humour will make you ROFL or at least enjoy a wry inner chuckle.

Here is a bit of light verse I dashed off after reading Roiphe's portrayal of Vera Brittain:

With brooding, bright Roland who died in the war

From his death, her brother’s and (implied) many others

In her Testaments - one, two, three and four

But privately thought him a great bloody bore

A new minted text she preferred much to sex

And domestication she came to abhor

Spared it thanks to Winifred Holtby

Gave her a persona the UK could adore

Freed from love’s dreary fetters, this left lady of letters

While a true self made woman, slightly chills at the core!

Informative yet entertaining as always. Could we see a musical from this material?

Why not? There was a musical about The Mitford Sisters! How about Well of Loneliness - the (cross dressing) Musical or Bloomsbury Follies?

I'm afraid that most of what Roiphe writes appaers to be taken from the biography Vera Brittain A Life by Paul Berry and Mark Bostridge. Roiphe has nothing new to add, much to my disappointment as I was hoping that she might be more enlightening. Really recommend the Berry/Bostridge biography though, which I think is still in print.

Thanks for the recommendation, Dana. I guess I found the Roiphe book enjoyable for its breadth and tantalising tidbits of information rather than any great depth of analysis.