A Tree Grows in Fairfield

I've been to Fairfield three times this year. I think I had previously been to Fairfield only twice in my life. Once in the 70s, when I was about 13, my siblings and I were taken to Fairfield to meet my Auntie Elva and Uncle Arthur, and John, the only one of their four boys who still lived at home. My main recollection of that visit was that they had a sulphur crested cockatoo that shrieked 'Arrr... thur' in perfect imitation of my aunt! Then, in 1990, I went to Fairfield Library for the launch by the Hon Gough Whitlam of my mother's Fairfield - a Pictorial History. That she wrote a history of this south western Sydney suburb suggests some connection or relationship with the area, but in fact she just happened to be the freelance writer commissioned to write the book. 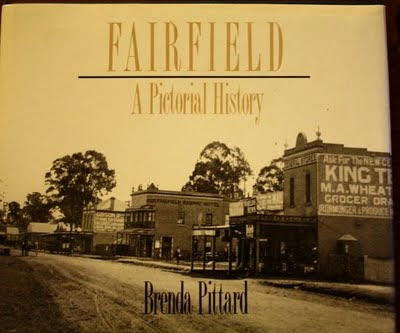 Mum's book published in 1990 for Fairfield's centenary and dedicated to the memory of my brother Nicky.
Facebook is the reason I've started visiting Fairfield more often now. Through Facebook I have re-connected with a branch of my family I hardly knew. So now I go to Fairfield to see my elderly Uncle Arthur in his nursing home and recently I went to see him with his youngest son, my cousin John. This is the same cousin John who was at home being an introverted teenage boy strumming his guitar while the cocky summoned his Dad so melodically back in the 70s. He now lives in Alice Springs. When he was last in Sydney we went together to see Arthur and to find a tree! In one of life's peculiar but abundant coincidences I had given John Mum's book to look at and amongst the memory jogging images he encountered therein was one of an enormous oak tree in Fairfield called Bland's Oak.
It turns out that back in the 60s when I was rambling about in the fields and woods behind our house in the Essex village of West Horndon, climbing the odd diminutive tree and occasionally falling in streams (subject for another posting), my four male cousins in NSW were hooning around the streets of Fairfield and climbing Bland's Oak. This tree is ENORMOUS, and it is enormous because it is really old. Not Californian redwood really old, but colonial-remnant-planting-on-previously-clear-felled-land old! It was planted, probably from seed, in about 1850 on the estate of prominent Sydney doctor and politician William Bland ( 1789 - 1868). 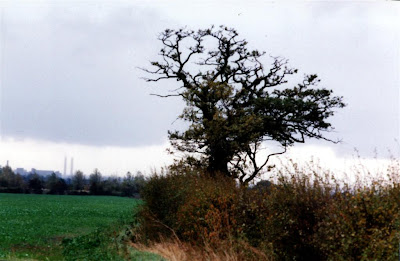 A West Horndon field and bit of vegetation.
To quote Brenda Pittard in Fairfield - a Pictorial History:

Mark Lodge was built by Captain John Horsley in 1814... and stood on the site now occupied by Fairfield Hospital...William Bland bought Mark Lodge from Horsley to use as his country estate... (On his death) his estate was broken up and by the 1930s all that remained of the magnificent property that had once been Mark Lodge was the oak tree that Bland had planted. In 1930 during a violent storm the tree's trunk was split because of the enormous weight of the wet leaves. Fortunately the knowledge and careful attention of a tree expert saved the tree though now supported by metal bands and frames.

And so it still stands, heritage listed and protected, propped up by iron struts on Bland Street, Carramar in a reserve beside Prospect Creek and on the site of Mark Lodge, called Oakdene Park. Despite being split asunder it is still a sprawling giant approx 13 metres in height and 30 metres in spread. 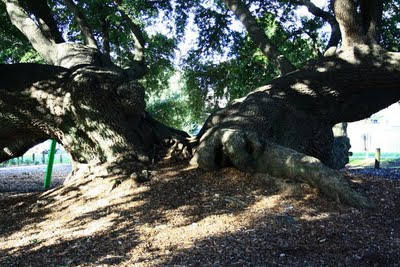 Bland's Oak
The official heritage listing that can be viewed on Fairfield Council's website (click on link under photo) notes that this is not the common deciduous British oak tree but a rarer species, Quercus Virginiana, that may have been a the gift of one of Bland's botanically minded friends such as William Wentworth. Interestingly, to again quote Mum, '(this) evergreen oak is found mainly in southern and central England'. And so, the inter connectedness of things continues... 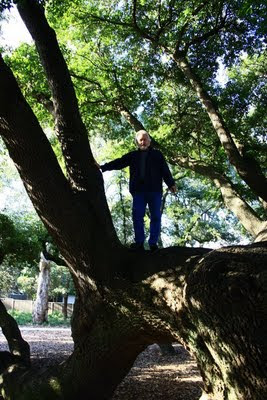 I too have only been to Fairfield a couple of times and look forward to doing so again and climbing that great tree.

I too have only been to Fairfield a couple of times and look forward to doing so again, for a post Fairfield feast and tree climbing adventure.

Thanks for the info. Very interesting. I was trying to figure out what species it was as it didn't look like the oak I knew which is Quercis robusta. So thanks for solving that mystery for me