I visited Hobart's new and much lauded MONA (Museum of Old & New Art) on Monday. Actually I visited it on Sunday, but that isn't as alliterative. Mid long weekend, with an extra injection of tourists because of the volcanic ash cloud, we should have expected queues. What we didn't expect was that they would be longer at the coffee shop than for admission! Just an aside on the cafe industry in Hobart, it is best to phone ahead if there are more than 4 of you. Large numbers of paying customers upset the staff. They make this clear by being disdainful or agitated or both.

Any way, we posted two of our outrageously huge group of 7 in the entry queue and went to order takeaway coffee. In the next 20 minutes our advance party twice relinquished the opportunity to enter MONA to stand in the brisk breeze awaiting their cappuccinos. 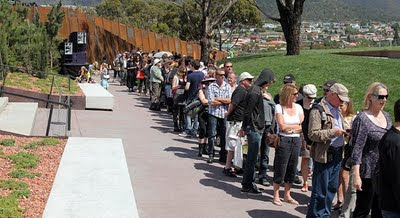 MONA - popular!
Visitors are admitted in lots of 14 so again, when we reached the head of the queue, we and our scouts stood back until we could proceed en masse. Inside we were given an orientation talk by one of MONA's youthful staff to the effect that there is no signage in the museum, you use a touch screen MP3 player and headset to locate yourself and access information about the exhibits. You relinquish these when you leave so forgive the lack of any identifying details about the art and artists in this post*.

I have been able to find little online about the building, its site or history but a security guard told us that a European immigrant planted a vineyard on the land (at Berriedale, beside the Derwent) some time in the 20thC, that in the 1980s a house designed by the 'architect of the National Gallery of Victoria' (guess that could be Roy Grounds, Mario Bellini or Peter Davidson & Donald Bates) was built and that MONA's impressive central chimney/spiral staircase structure is part of the original house. At some point all that became the property of enigmatic billionaire David Walsh who has excavated around and under the house to create his subterranean 'anti-museum' or 'subversive adult Disneyland'!

Crikey's coverage of MONA's opening in January 2011 emphasised that the museum echoes Walsh's Darwinianism and belief in life's essential randomness. We all experience, but generally fail to confront, at least in a public gallery, just a few constants i.e. that 'we seek sex, we defecate and we all die'. MONA, with its mixed media, un-labelled, un-chronological exhibits that include Egyptian mummies, taxidermied and skeletal animal remains and a simulated giant human digestive tract certainly make these shared facts inescapable.

Descending 3 floors from the ground level entry to the basement, where it is suggested you begin your tour, juggling your MP3 player and headphones (and in my case your spectacles as well) you notice two more beverage/food outlets whose existence causes you, appropriately enough, to begin an acknowledgement of randomness that will continue for hours to come.

MONA is almost totally underground. That means that there is no natural light. It has an eccentric floor plan and a feeling of being outside time, disorientation sets in quickly. This arguably puts you in the right frame of mind one of the first installations you encounter, a version of Roselands' raindrop fountain propelled into the nihilistic 21stC with the words like "mafia", "Jesse James" and "American Idol" forming in its cascades.

Nearby, between heavy burgundy velvet curtains, is a stuffed raven suspended over a real or reproduction 18thC cabinet containing an urn of human ashes - my MP3 player said human hair was also involved but I couldn't spot any unless it was of a Rapunzel-like strength and supporting the raven.

Then I was mesmerised by a video depicting a young woman undergoing various ophthalmic, surgical, immersive and electronic procedures in a kind of laboratory/conservatory/natural history museum setting - later another woman dismembered a piano and another showed great flexibility on a trapeze. The imagery recalled Paul Delvaux and Louis Bunuel. I would like to have made a note of whose work I was viewing and to record a reaction a little more complex than 'LOVE'/'HATE' but my full hands, the limitations of the MP3's programming and, I'm sure, Mr Walsh's intentions, made that impossible.

The diversity and unorthodox juxtaposition of works I saw over the next 2 hours proved both exhilarating and frustrating. The no signage policy meant I completely missed a Brett Whiteley painting in one of the only parts of the gallery with natural light. I stumbled upon a Russian video triptych quoting mannerist paintings and delivering a truly poignant and chilling Armageddon message. I loved that (and could tick 'LOVE' in all conscience) and also a work I have since heard is called 'Cunts and Other Conversations' which comprised casts of over 100 sets of female genitals. I didn't ever find the much publicised excreting digestive tract or any animal carcasses which form exciting parts of the MONA collection.

MONA is must see. It is very probably unique; there are some amazing exhibits with promises of additions and changes to come. I'm over 50 and do not consider myself a complete luddite. I did however struggle with the touch screen MP3 player as I hadn't used one before and found the earphones competed with the MP3's lanyard about my neck. I only remembered to consult the floor plan when I found a stray copy on the floor towards the end of my visit. I know I was being conceptually challenged and asked to experience art in a fresh way without curatorial interpretation but I can't discard my existing art knowledge and wanted to make connections. I would also rather put my energy into experiencing the art itself rather than into trying to operate the technology. I kept thinking of the Powerhouse where technology is used more sparingly and is much more interactive and user friendly. I don't know what they do for people with actual disabilities but the glasses on, glasses off thing I had to do to find out where I was and what I was looking at was an effing pain.

You can't see the collection in one day nor is it desirable to, but I do feel a bit as if I have only rehearsed for my visit and now need to have the real experience. As our departure from Tassie was not delayed by the ash cloud that opportunity won't come for some time.

Really keen to hear what others who've visited MONA have to say.

*Post script - I am informed I could have saved my tour and tracked it later. Oh, well, I'll know for next time.
Posted by Alice at 12:41 PM

I thought they were iPhones but someone or something said otherwise and I am always ready to be corrected, and recorrected, re. technology.

Great review Alice. I'm keen to visit but will give the coffee queue a miss.