Everything more is more again in Dusseldorf! 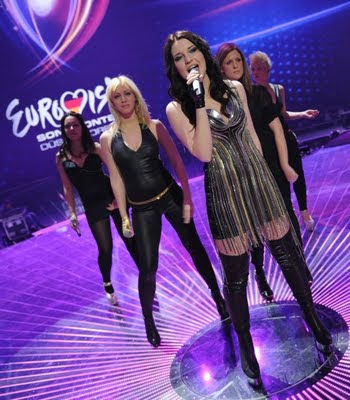 It's Eurovision time again. We just watched the second night's broadcast, billed as the semi finals. The finals are on SBS 1 tomorrow night (15 May). Last year Eurovision was disappointingly bland but this year the excess and tenuous musicianship we have come to love were back in spades! Here is a run down of some of the acts that made the biggest impression.

Former (1998) Israeli winner transsexual Dana International seemed a strong contender when her song 'Ding Dong' was announced, standing as it does in a long line of silly Eurovision song titles: 'Boom Bang-a-Bang' (UK, 1969), 'A-Ba-Ni-Ba' (Israel, 1978), 'Bana Bana' (Turkey, 1989) and 'Bourn Badaborun' (Monaco, 1967). Perhaps on reflection though the choice of consonant may be ill advised. Any way the song, her performance and couture were so dull (see below) that they made one long for Fran Drescher's sense of style and vocal projection! 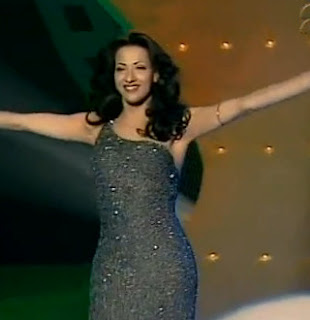 From Romania came Hotel FM with their clicky, clappy, catchy 'Change' a contender despite its un-Eurovision defeatist lyric 'I can't change the world alone'. We liked their Romanian pianist much more than their English lead singer so here (below) is the only picture I could find which shows he snacks healthily as well as vamping appealingly. 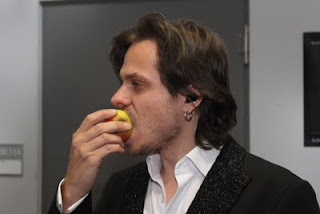 Almost all the songs we heard tonight were sung in English which I know is often contentious in the competing countries. But it matters little as most lyrics were incomprehensible any way. Thank goodness for SBS's Julia Zemiro and Sam Pang and their elucidating commentary. 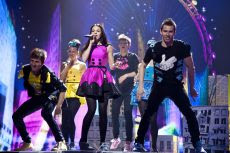 Each song's title at least was generally left ringing in the ears. This was definitely so with the subtle 'I Love Belarus' (yes, Belarus's entry), Moldova's quirky 'So Lucky', Ireland's 'Lipstick' and Estonia's Rockerfeller Street. Rockerfeller Street was performed by 18 year old Getter Jaani (left), she is delightful, can really wear magenta and started her performance with a magic trick. The number's art direction was pretty cool using a graphic model cityscape, perhaps a bit too cool to be real Eurovision material - don't recall many lighting effects or pyrotechinics at all.

Irish entrant Jedward are twins John and Edward Grimes. They are very BOUNCY, suggesting Father Ted's Ardal O'Hanlon on acid. Their personal stylist clearly disdains gravity and has an open ended budget for hair spray. The way this hyperenergetic, Warholesque pair perform Lipstick is described quite accurately in Wikipedia as 'a dayglo wad of electroglammy bubblegum' (I'd love to credit that but Wikipedia didn't). They are a lot of fun and are through to the finals. Also high in the quirky stakes is Moldova's Zdob si Zdub with 'So Lucky' - their usual pub rock image altered by donning tall hats which the Eurovision website calls 'cosmic antennae' but looked more as if they came straight from the gnome section at the Garden Centre. However their ska influenced song and their unerring unicycling made them one of this year's more memorable acts! 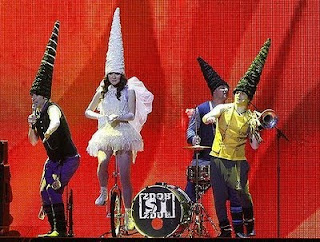 While members of Zdob si Zdub were prepared, for their art's sake, to look as if home was Dingly Dell, we saw no costumes as grotesque as those of 2008's winner Finnish Heavy metal band Lordi's. Remember them? Sort of dinosuar bikers!

Pretty boy and barbie doll lead singers did abound however. Macedonia's Vlatko Ilievski is right out of a menswear catalogue but our focus readily wandered from his chiseled profile in disbelief to his stumbling Zorba-style backing dancers one of whom inserted an accordion solo seemingly randomly into the performance. More twins, female this time, from Slovakia teetered on 8 inch heels, the wind machine causing their golden tresses to play about their even more golden fake tanned shoulders and cleavages. Despite the fact that their song contained only 5 notes the girls managed to avoid all of them!

I could go on but I am spoilt for choice (and we only saw a fraction of the acts, go to http://www.eurovision.tv/ for the full catastrophe). There was the impressive lap of honour, guitar in hand and presumably still being strummed, done by one of the 3Js, boarding school pupils from the Netherlands who've formed a boy band. (Maybe some sort of Chariots of Fire homage?). There was Ukranian Mika Newton replete in angels wings, singing, appropriately enough, Angel, whilst projected behind her were images of pathos trickled from the hand of 'sand artist' Kseniia Simonovia. There was Musiqq from Latvia comprising a chubby boy (I think he is only 17) and an early Elvis Costello look alike - the ill fitting waistcoats there wore looked vaguely better on the Elvis clone. And did I glimpse the Swedish soubrette suffer a tiny wardrobe malfunction a la Janet Jackson towards the end of her act?

Definitely a return to form by the teeming mass of celebrity wannabes and pop chart hopefuls from the northern hemisphere. The electricity bill for special effects and online voting (or 'woting' as one of the Dusseldorf anchors referred to it) would take about 1,000 earth hours to offset and the ostentation of makeup and costuming on display means that none of us need ever feel overdressed again! And the winner is... who knows or cares? Eurovision has already delivered. 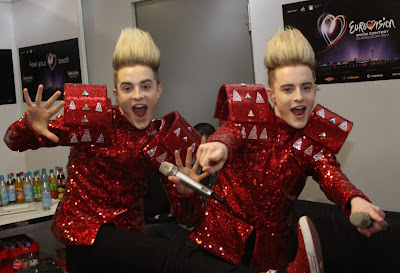 Stop Press: Ell/Nikki from Azerbaijan has won the 2011 Eurovision Song Contest with 221 points (pronounced 'pwants'). We didn't see this entry last night so just Googled the You Tube clip which begins with a lot of 'ooh, ooh' noises and a Golden retriever leaving the set. We know how the dog felt!
Posted by Alice at 9:53 PM