Thank god we got "The Kennedys" 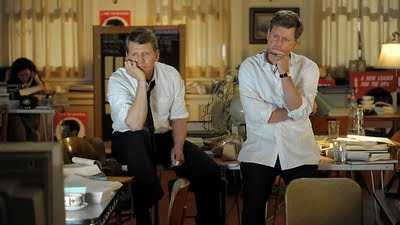 Barry Pepper & Greg Kinnear as two charismatic, over achieving, highly sexed Irish boys watch 'Leave It To Beaver' to get a few tips.
So, Sydney finally got to see 'The Kennedys' (Sunday nights 29 May, 5 & 12, June). There are two versions of the story behind its delayed screening. Both acknowledge that the US/Canadian History Channel commissioned the series, filmed over two years, at a cost of $25 million US, but abruptly dropped it in January of this year with the statement: "this dramatic interpretation is not a fit for the History brand", The first story says they responded to pressure from Kennedy associates and admirers to walk away from the series. The other version is the same except that the reason given by its proponents for the History Channel abandoning their project is that they realised the series was 'completely f***ing terrible' and that the Reelz Channel who eventaully aired it did so because 'they didn’t care that it is completely f***ing terrible' (source: Best Week Ever TV).

Casting doubt on the first explanation is the fact that the series contains nothing that hasn't been public knowledge for aeons i.e. Joe Kennedy was anti semitic and not above rigging a ballot or two, Rose Kennedy was a manipulative and controlling fanatical Catholic, JFK had a bad back yet consistently put it about a bit (well, a lot), Bobby was uber fertile and unflinching, and, in cleaning up one of his big bro's messes, pretty tough on Marilyn Monroe... None this is exactly bombshell material, but perhaps still heresy for canonising Cameloteers.

The charge that the series is simply bad TV centres both on the characterisation and on the dialogue, lampooned as clunky, melodramatic and pregnant with 'prophecy'. This seems a little harsh. 'The Kennedys' isn't a documentary and let's face it no aspect of the actual story of the dynasty, the Rat Pack, the Mob, Cuba, the USSR, the civil rights movement, Dr Feelgood's magical injections, J. Edgar Hoover, the paparazzi etc and of course, the shocking assassinations, themselves is easy to downplay. I expected a certain chilling profundity of tone for these BIG themes and subjects and that's what I got. And what if some of the writing and the portrayals are a bit self conscious? Setting out to capture iconic figures and moments it would be hard to be otherwise. However perhaps that is easier to feel that way when I come to the series as an Australian via the UK and was 6 years old when JFK was assassinated. I wonder if I would be so ready to suspend disbelief if the story were part of my national heritage, perhaps a dramatisation of The Dismissal with say, Garry MacDonald as one of the reporters on the steps of Parliament House. Hey, wait a moment... .


Basically, like US critic Linda Stasi in the New York Post I experienced the series as 'one of the best, most riveting, historically accurate dramas about a time and place in American history that has ever been done for TV'. And as well as being riveting historical drama, the series was a wonderful showcase for some fine character acting from Diana Hardcastle, Greg Kinnear, Barry Pepper, Kristin Booth and, most of all, the wonderful Tom Wilkinson. Katie Holmes was even surprisingly adequate as Jackie but I wouldn't put her in their class. 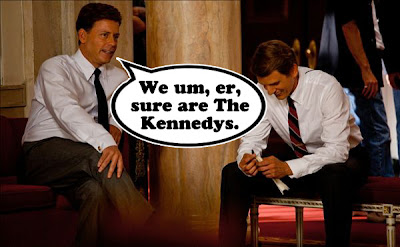 Mean cartoon from US satirical TV Review Publication Best Week Ever TV).
So, thumbs up for 'The Kennedys'. Damn fine apple pie in its own right and definitely superior to its main competition on those Sunday evenings, that tedious re-evocation of 'Upstairs Downstairs', 'Downton Abbey'. 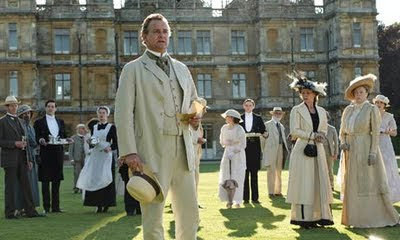 M'lud experiences a twinge of angst or dyspepsia when a telegram tells him that The Titanic has sunk, the domestics want a living wage and he will need to install a safari park to meet death duties.
Posted by Alice at 7:42 PM

Certainly makes me wish I'd seen it. Sounds like trashy TV at its best and would admirably fill in time until the Russ Meyer dramatisation of the life of Mother Teresa airs on the Nookie Channel.