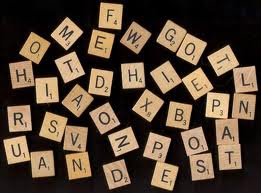 Does my lack of inhibition challenge ideas of propriety? I ask (rhetorically).

I was a very proper child (in the UK) in the 60s. I wore gloves and went to Sunday school. I didn't say the word 'damn' until I was eleven. I was desperately looking for my school shoes and my total recall of the exact context in which I uttered this profanity is proof of my immediate sense of self reproach. Even at fifteen, circa 1971, I thought if any man saw a mole about 5 cm above my cleavage we would be duty bound to marry.

Then there was the 1980s when I became a vigilante for feminism and social re-engineering and completely failed to notice when I was being flirted with and missed a lot of other subtle human interaction that makes life a joy.

How have I evolved into a fairly forthright, even libertarian middle-aged woman? (Rhetorical again). Well obviously experience changes our perceptions and alters our thresholds. There has been quite a bit of water under the bridge since my pious girlhood: love, lust, birth, death, encounters with all manner of achievements and addictions, my own and others'. Stuff like that makes its mark, and not in a bad way (take note, Pontiff). I still define myself as someone who generally wishes the human race well and upholds its rights and dignity. However my recipe has changed. I now believe in harm minimisation and Buddhist style non attachment. That probably sounds as rigid and joyless as my 1980s doctrines. What I actually mean is I no longer think the perfection of society is possible or even desirable, humans can be both magnificent and frail, we can not change this by endless regulation and we can not project our own yearnings and ideals onto others and expect anything but bewilderment and disappointment.

That is probably why I didn't experience the royal wedding as fairytale made flesh and I am not cock-a-hoop that Osama Bin Laden has been killed in a slick US military operation.

I do like a larf though and as well as Princess Beatrice's hat, a concept aired in one of my Uni lectures has tickled my fancy this week. I got the giggles when I heard about an organisational theorist, Gabriele Lakomski, who looks to birds' flocking behaviour and termites' mound creation as evidence of 'epiphenomenon' i.e. the false appearance of led or directed behaviour that parallels what occurs in organistaions within human society. Now is it just me, or is even what goes on at City Rail or Maccas a bit more complicated than following a pheremone trail and trying not to bump into your peers? That one's rhetorical too.

Below: naughty postcards another shame of my youth and delight of my later years 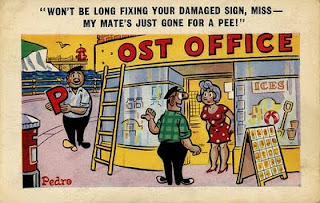 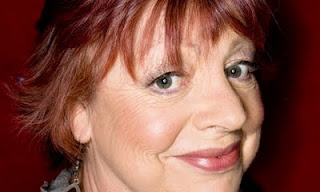 Above: Jo Brand - I love her to bits and think 'Getting On' is the epitome of grown up complex telly!

Great entry Jan. I'm referring to your blog there.