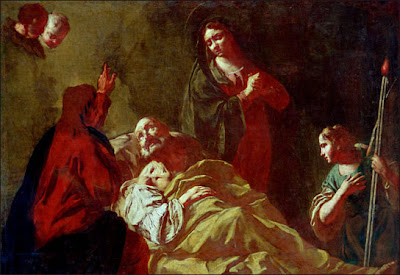 The Death of St. Joseph, c. 1740, Piazzetta Giambattista. (St Joseph, Jesus's earthly dad, is the patron saint of peaceful death and of anti-communism)

What does it mean to 'make a good death'? Media reports state that Dame Joan Sutherland 'died peacefully in the early hours of (the) morning after suffering a long illness' and that she 'died at home with her husband, conductor Richard Bonynge, and son Adam at her side'. She was 83 and appeared to have achieved all her ambitions. She died at home with those she loved around her. She had been able to convey her wishes to her family about the kind of funeral she wanted and (not surprisingly) the music she would like at the funeral.

It would appear that Dame Joan's death met many (and may have met all) of the British Medical Association's Principles for a Good Death:
How many deaths meet these criteria? None in our family has. It is just not possible that a hospital, however humane, will be sufficiently attuned to each individual patient's decline to alert family members in time for them to make it to the bedside for their final moments. I heard too late to be at my grandmother's bedside and got to my mother's about half an hour after getting the call with the news. To die at home may be a fond wish for many of us, however, dying at home alone and lying undiscovered for days as my Dad did is a godawful way to go.

Knowing when death is coming and understanding what to expect implies a level of acceptance. My mother and my mother in law both felt angry and cheated to know that death was imminent when they, at 65 and 72 respectively, still had a few things left to do and were not ready to leave their friends and families.

Then there are the suicides - my grandfather and my brother. Maximum control over the circumstances and means of their deaths, exercising the ultimate in pain and symptom control but completely bereft of dignity and support.

In his 1951 poem Do not go gentle into that good night Dylan Thomas urged his father/us:


Do not go gentle into that good night,
Old age should burn and rave at close of day;
Rage against the dying of the light.

Though wise men at their end know dark is right,
Because their words had forked no lightning they
Do not go gentle into that good night.

Good men, the last wave by, crying how bright
Their frail deeds might have danced in a green bay,
Rage, rage against the dying of the light.

Wild men who caught and sang the sun in flight,
And learn, too late, they grieved it on its way,
Do not go gentle into that good night.

Grave men, near death, who see with blinding sight
Blind eyes could blaze like meteors and be gay,
Rage, rage against the dying of the light.

And you, my father, there on the sad height,
Curse, bless, me now with your fierce tears, I pray.
Do not go gentle into that good night.
Rage, rage against the dying of the light.

Dylan beseeches his dying father, and by extension all of us, to express our indignation at death and to leave an indelible impression of our vitality with those left behind. Not for him reclining in the arms of Jesus and Mary and fading away as St Joseph is depicted as doing.

As an atheist, the modern tendency to celebrate a life at a funeral rather than to seek comfort by proclaiming the existence of continuing meta existence in some ethereal hereafter obviously appeals to me. But the new ceremonial is by no means send off 'lite'. I was at funeral recently that was planned and conducted in difficult circumstances. It was another died at home unexpectedly and not discovered for some time situation. The police were involved, an autopsy performed and an inquest required. The person himself was reclusive, moody and obsessive and had had fallings out with several friends and family members. He was also a committed gardener and environmentalist, the compassionate rescuer of a stray dog and a custodian of our local history. In his eulogy the dead man's brother did not omit references to his some of his prickly qualities but his words and the reminiscences he invited other's to contribute all struck a note that was both tender and reverent to the man's memory and that truly celebrated the value of all life. To be one of that gathering was to feel a sense of community, of human connection and of wonder at what can be contained in this 'brief hour in which we strut and fret upon the stage and then (are) heard no more'.

The ideal of a 'good death' is a rarely realised. The good marking of a passing is eminently achievable. LOL cats remind us of the reverence with which most aspects of life (and death) should be treated.
Footnote: Not only was Dylan Thomas anti death with good grace, he was, according to Socialism Today (the monthly newsletter of the Socialist Party of England & Wales) 'a thinker with a grounding in Marxism, and a self-proclaimed revolutionary socialist'! Perhaps Thomas is a candidate to become the patron (anti) saint of wealth redistribution and shamelessly shambolic death? Weren't his own last words: 'I've just had eighteen straight whiskies, I think that's the record'?
Posted by Alice at 6:01 AM