Observations on Sydney summer 1 month and 4 days into 2011…

Weather: Does anyone actually like this stifling heat? Temperatures in Sydney have been up to 41 degrees and doing even the most rudimentary things is stressful, inelegant and exhausting. It is scandalous that ANY un-air-conditioned trains are scheduled at peak hour. The fact that we had one cooler day that coincided with Opera in the Domain is a miracle for which I am highly appreciative. Carmen was wonderful!

Contemplating starting uni in late February- if this heat persists - fills me with horror. Perhaps all tute rooms and lecture theatres are air-conditioned these days. They weren’t in the early 80s. Motivation to go to my aquarobics classes is NOT a problem.

Surely the climate change warnings are being proved frighteningly right? Extreme weather in the form of floods and a cyclone has hit Queensland. The citizenry are copping a beating but why is EVERYTHING reported on and mulled over to the enth degree? A guy at work told me his cousin was cleaning up his property in regional Qld after Yasi hit when a Channel 9 crew poked a microphone under his nose. He told them to ‘fuck off’. What an excellent response to the voyeuristic, prurient hacks! If only others weren't so set on their 5 minutes of fame.

Fashion: What is it with those pants some young people are wearing with the crotch at approximately knee level? They look like they are wearing a nappy that is long overdue for changing. The maxi dress has made a comeback and for the most part looks cool and comfortable however spaghetti straps are not for everyone. It turns out that 'budgie smugglers' have not been completely eradicated (blame Tony Abbott); they still seem to be the swimwear of choice for some over 5os men. Sad, sad, sad. 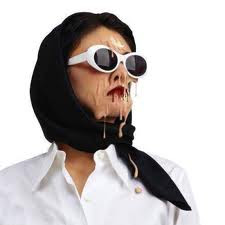 The heat interferes with one's grooming

Reading: What a joy to read David Sedaris’s Holidays on Ice straight after Christmas! Every review I'd read said Sedaris makes you guffaw in public. They were so right. His account of working as an elf at Macys is hilarious. The day he and the other elven brethren realised 'satan' was an anagram of 'santa' and started urging the queuing customers to 'step this way to see satan' or reminded them to 'thank satan for the Baby Born he gave you last year' makes side splitting reading. I have just received his Dress Your Family in Corduroy and Denim from the US. Will try to defer opening it until I have finished the letters of the combined Mitford sisters which are a joy of another kind.

Socialising: At two gatherings I have been to my hosts have been gracious enough to train a fan on me out of doors. It was the only way I could cope with the heat. Sizzling one's steak and snags on a barbecue though is cruel and unusual punishment in 30 degrees plus! The cold collation comes into its own in summer. While lumps of protein have fried, tempers have flared. My book group has fractured. Characters have been analysed with little or no charity. Reproaches and ultimatums have been published online. It is all very wearying. In a heatwave where effort is required to do almost anything such bickering is a powerful disincentive to retain my membership. A few 5 Seeds ciders or a nice bottle of Screaming Pig or Sacred Stone with friends at the pub is however a very pleasant way to pass the time!

Telly: When it's been bad it's been very, very bad but when it is good it still gets me in. Enjoyment has been had with Robbie Coltrane in Murderland, everyone in Ashes to Ashes and with the return of Big Love. QI is almost always a hoot. Looking forward to the new Matt Lucas and David Walliams series Come Fly With Me.

This is blog lite. Hard to be profound when it is hot enough in here to boil a monkey's bum in here, your majesty!