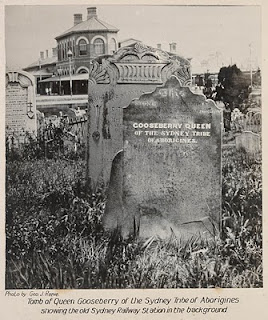 I have been thinking about the transient nature of social institutions - the way we seek our entertainment, commemorate our dead, travel around our city - all are subject to fashion. In the 1930s we flocked to elaborate picture palaces but 3 decades later most were demolished or converted to other commercial uses. Between the world wars we replaced many of our simple, poignant early memorials with big enduring edifices modelled on the obelisks and pyramids of the ancient world. In the 1950s we ripped out the tram network that had served the city & suburbs effectively for years and introduced greenhouse gas belching buses, and so on. As I've mentioned, I was distressed to learn that Sydney's Town Hall and Central Railway Station are built over graveyards where convicts, free settlers and Aboriginal people (above) were buried. Scant attempt was made to relocate remains or headstones or even to chronicle the names and other details of those disinterred or simply submerged.

Anyone who has read this blog knows that I am not religious so my objection isn't that such redevelopment disturbs 'hallowed' ground a la Poltergeist (the 1982 Steven Spielberg film where a house is haunted and finally subsumed because it is built over native American burial grounds). Although the fact that respect for ancesto 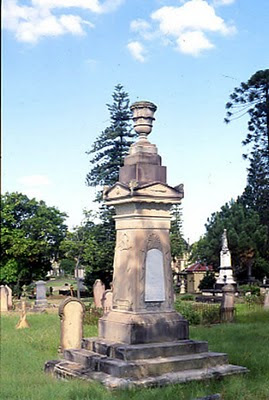 rs is common to most cultures suggests it really is something the human psyche requires. What really pisses me off is that we have casually eroded so much of our history. First we (Europeans) decimated traditional Aboriginal lands and then we razed the evidence of our own early settlement. The monument in Rookwood Cemetery (right) to those whose 'resting' place was once the old Sydney Burial Grounds (where Sydney Town Hall now stands) records the name of the serving mayor of the time but not those of anyone whose grave was disturbed. The siren song of progress coupled with shame or indifference about humble or criminal origins prevailed. Were there historians then who thought the manner in which these building projects were executed a bit rash? Were there any - apart from the clergy - who raised the alarm some 100 years later when Camperdown Cemetery was resumed as public park land and its headstones crowded around the newly erected walls of St Stephens to crumble away?

Browsing the pictorial archive sites is a form of time travel. The hairs on the back of my neck stood up when I found the pictures of my childhood haunts that I wrote about in my last posting. The same thing happened when I found the Tivoli shots and the 1953 photo (below) of a tram running alongside Belmore Park (following the same route as the modern light rail I pass every day). I am not quite sure why. I wasn't born when the pictures were taken and, despite attending the odd political rally there, wasn't really familiar with Belmore Park or Hay Street until recently. I think it is the idea of 'those feet in ancient times' having trod the same pathways that I tread today and the reverberation of all those other presences that awakens a sense of awe and wistfulness in me. 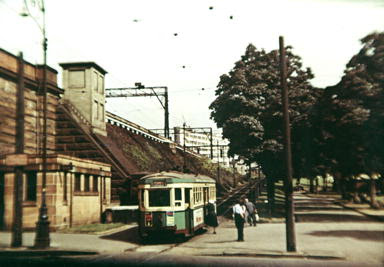 The book The Time Travellers' Wife powerfully evokes our bittersweet relationship with the past. I suppose it is a paradox: all that we know, all that is familiar, everyone we love, only exist and have meaning for us because of what went before. As Henry DeTamble the time traveller of the novel's title learns when he repeatedly revisits the scene of his mother's death, we can not intervene to change the past. There really is no point crying over spilt milk but by viewing it from the different standpoints in our lives we can better accept the spillage. And, without being completely deterministic about it, there are certain inevitabilities about our lives and our task, should we choose to accept it, is to discover and enrich the events that will befall and have befallen us.

Time and chance happeneth to all people - Eric Bana as Henry DeTamble fades when his past self briefly visits his wife and child after the death of his contemporary self.
I guess you could call me a bit of an obsessive. Time travelling is what I am doing this month, maybe next month it will be all human rights as I work with my daughter on 'our' To Kill A Mockingbird assignment. Now there's another deservedly revered novel...
Posted by Alice at 8:33 PM