Shooting (and surfing) the past* 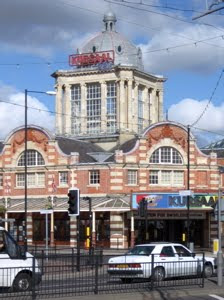 I have been living in the past recently or, more accurately, I have been indulging in trips back and forth between the present and the early, mid and later 20thC.

It started with my discovery of my local council's photographic archive, spread to exploring the City of Sydney Pictorial Archives and thence to looking on the 'net for images of locations that are significant to me from my UK childhood (such as the one at left of The Kursaal amusement park, Southend-on-Sea). This posting is really an excuse to share some of them with you, dear reader.

Southend-on-Sea was the favourite seaside haunt of my Essex born and bred grandmother (whom we always called 'Nanny'). My sisters and I spent many happy hours in her company visiting the rides and stalls at The Kursaal and walking through
the landscaped parkland that I now learn is (Pythonesquely) called The Shrubbery . 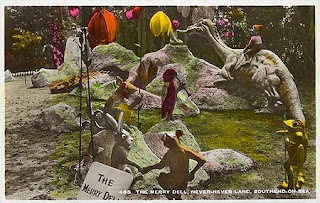 The Shrubbery was the site of an eccentric precursor to the modern theme park, Never Never Land (see picture right). Never Never Land was nothing to do with Michael Jackson but was, to quote the Southend History website:

...truly a mystical place, a land of mythical castles, goblins, dragons, fairies and lights in the trees, and even a magical model railway with stations and mountains and bridges. The model castle was at the entrance and it had lights in the windows and a little rowing boat crossing the lake at the bottom. It was worth the price of pennies at the turnstiles to get in. During the 1950s, Never Never Land packed in thousands of adults and children each year...

Apparently business trailed off during the 1960s but that's when my siblings and I were Never Never Land enthusiasts. I have vivid memories of the animated illuminated models of fanciful creatures and the miniature train that traversed the cliff side terraces. I recreated the latter back at home forming chairs and cushions into carriages, populating them with my sisters, dolls and teddies and pouncing on Nanny as soon as she got home from work, insisting she don her special Never Never Land jacket and board the train to imaginary stations with names like 'Knives & Forks' and 'Eggs & Bacon'!

The other seaside settin 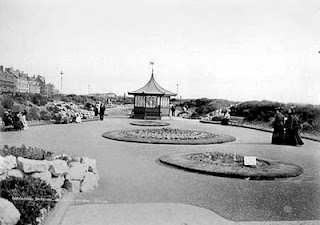 g for our youthful walks with Nanny were Lytham St Annes/Blackpool (home of it's own famed illuminations). The Esplanade at St Annes is pictured left in the early 20thC. The little shelter with the dragon on top it was still the when I visited in the 1980s (below right) but its setting was rather less exotic than I remembered. The pseudo Chinese lakes and garden beds surrounding the shelter seemed much more modest, and of course smaller, than they had seemed to me as a 5 year old (or whatever I was when I first encountered them). 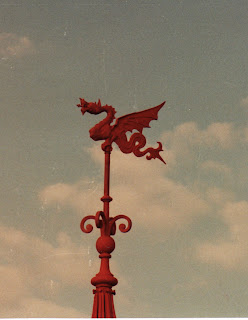 What did impress me was that they and so many other sights and locations I remembered were intact and cared for, and in some cases even restored! A derelict 16thC church on the hill outside our village of West Horndon became something of an obsession with me in 1967-68 (the two years prior to our emigration). It was rumoured to have connections with Henry IV and Anne Boleyn and housed tombs of local aristocrats, the Tyrells, from the period of its origin. I did a school project on the church, named All Saints, East Hornden (pictured below as it was in the 60s), replete with copies of inscriptions from the tombs and brass rubbings.

Remembering it as totally disused, populated by sparrows and pigeons, its pews, rafters and bell tower steps all liberally coated with their droppings, I was astonished and very moved to find it in use for concerts and cultural gatherings (rather than for worship) when I visited in 1984. 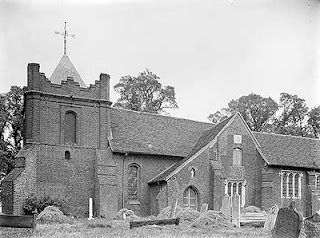 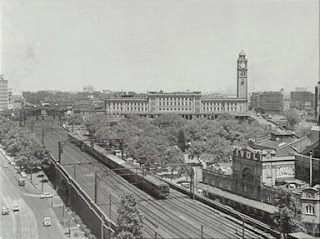 I have also been tempted to seek out old photographs of sites closer to home, my current home, Sydney's south-western suburbs, and to my work, in the Haymarket. A plaque on the building where I work at 323 Castlereagh Street states that it is the former site of the Adelphi and Tivoli theatres although I've discovered that the Sydney Tivoli actually had its first incarnation at 79-83A Castlereagh Street where Skygardens now stands . A colleague tells me that state rail employees still refer to the part of the line just before Central that passes our building as 'the Tivoli Junction'.

In the photo above you can see the 'Tivoli' sign on the right. The mass of trees is Belmore Park then Central railway station is in the background. The Tivoli met the fate of most early 20thC theatres of ceasing to show live performance and being converted to a cinema, then, with the advent of television, ceasing operation altogether. It was demolished in the 1960s.

From the 1920s onwards most Sydney suburbs had at least one picture theatre. Some, like Campsie and Earlwood in the Canterbury area where I live, had several. My last indulgence for this posting is to show you two local extant cinema buildings that somehow escaped the tide of progress. I have also been looking for the locations of others that didn't survive at all or have done so in a drastically unrecognisable state. However that, and some information about Sydney's predilection for building over its cemeteries can wait for another posting!

* this posting's title with apologies/acknowledgements to the excellent 1999 Stephen Poliakoff television series.