Memories of the Sydenham 'push'

The Cobb & Co Diner Princes Highway, Tempe in its heyday, 1964
My recent archival trawling has led to a lot of interesting discoveries about the Marrickville - Canterbury area where I live. Unearthing the 1964 picture (above) of the now sadly reduced Cobb and Co drive-in diner on the stretch of the Princes Highway that approaches Sydney airport led me to seek out locals with memories of the era. Meeting Guillame Gnome de Plume* (below) has been a revelation. I had no idea that this region of the Marrickville municipality had a French Quarter (the 'Paris end of Sydenham' as Guillaume refers to it) or that it was a hotbed of radical politics. I reproduce fragments of an interview with Guillaume about the Tempe - Sydenham region below. I hope his recollections will delight readers as much as they did me. 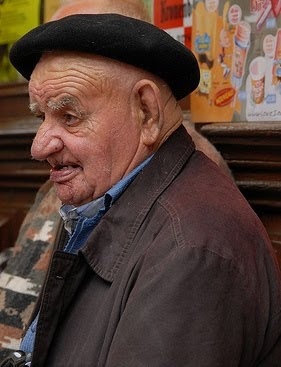 My informant - Guillaume Gnome de Plume sporting his beret (and Blunnies -not visible)
As we sat down to talk in one of Marrickville's many chic cafes Guillaume enlightened me that back in the 60s the Cobb and Co Drive-In, (which he still insists on calling 'Le Cobb avec Co'), although best known for its speedy late night service of burgers and 'foot long dogs', actually also housed a little known private dining area frequented by French expats and the intelligentsia of Tempe.

It is true, there was this romantic little dining room off to one side that had an understated decor of pinball and cigarette machines. Very, 'ow you say, 'post-moderne'. Reminded me of the . On many nights I could be found there in my beret and striped boat-neck t-shirt reading Flaubert, teaching the truck drivers to play boule or discussing philosophy with the radical students.

Me: So the Cobb & Co diner was a centre for the Sydenham - Tempe avant garde? Is it true that it fomented subversive political thought and even action?

Ah, oui, I remember it well. There were plane trees along the Princes Highway in those days (that stretch we knew as the Paris end of Sydenham). It was May and they were shedding their leaves, carpeting the asphalt where the autos stopped to get their burgers. There was a chestnut seller who had his little oven on the island in the middle of the Cooks River nearby, he rowed his wares across to buyers... he was, 'ow you say, the 'chain smoker' and always cursing the rising price of Gauloises.

It was May of '68 when the infamous Tempe student uprising occurred. The local youth rose in solidarity with their French counterparts and tried to take control of the electricity sub-station near the bus depot. Tempers flared when it was found the fence was too high. The streets ran yellow with Passiona* that day.

Coke was regarded as capitalist, Fanta, bourgeois, and le Cobb avec Co did not have a licence to serve anything stronger.

Me: So how close to achieving 'le revolution' did the Sydenham push come?

Well, inevitably, in those early days of the revolution, difficulties, setbacks arose. At the announcement of the manifesto, there were those at the back of the group, standing close to the rumbling lorries travelling along the Princes Highway, who had their attention momentarily distracted. Chapter XI, dogma 6 makes reference to youth rabble-rousing. Several of the more fervent students must have misunderstood. They disappeared for days. It was said they had spent that time searching the areas around Tempe for small fluffy bunnies and for a long time afterwards, many of the local rabbits appeared unreasonably agitated...

At this point Guillaume launched into a lament in broken English on the hardships of conveying the revolutionary message to the proletariat and to naive young students and the unfortunate consequences of misplaced zeal for 'les lapins emigre'. We finished our cafe au laits and bid each other adieu. I feel it will not be the last time I speak to this incredible old gentleman about his memories of Tempe political and cultural life.

*Thanks to David Latta for sharing Guillaume's insights.