Why we get cynical about politicians

Is it just me or has this week given us a monumental amount of evidence that most politicians are ambitious, disloyal, reactionary, self -interested, self justifying bastards? I am going to stop short of saying I feel sorry for Malcolm Turnbull. There is something about Malcolm's self assured, smirky, well-heeled persona that precludes sympathy. But for all his arrogance and sense of self righteousness he was trying to be a leader, to take a principled stand and to bring to book moronic neanderthals like Wilson Tuckey. He was clearly unsuccessful in persuading rednecks and conservatives in the Coalition that climate change is an authentic and pressing issue for the planet, and one that the electorate expects its political leaders to grapple with. Perhaps had he been more consultative or indulged the loonies just a little he could have done so. Instead the Liberal party has licensed the wonky world view of that Jesuit educated zealot, Tony Abbott. Rudd must be in 7th heaven - who in their right mind is ever going to vote for Abbott?

Below: Leunig proffered a number of candidates for federal Liberal leadership more inspiring than T. Abbot in last weekend's Herald. 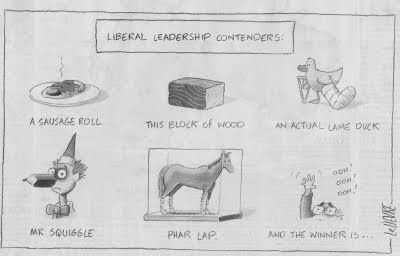 In NSW the movers and shakers in the right faction of the ALP thought they'd ape the antics of the federal conservatives with death wish tactics of their own and before we even had time to recover from the national Coalition's circus act they staged a parochial one to rival it. Poor Nathan Rees (I do expend some sympathy on him). He'd shown some balls and announced the major reforms of outlawing donations from property developers and enabling the Premier to choose his own ministry only to have the thugs and bullies of the right do him to death. Does Kristina Keneally feel easy wading through all that spilled blood? How long will she last?
Posted by Alice at 8:31 PM