Women In The Shadows


I posted a while ago about how I have become hooked on family history.  I continue to make discoveries both great and small: finding  an envelope in an old box of photographs containing three pages of reminiscences written in a shaky hand by my grandmother recalling her early life in Newtown, tracking down through birth announcements, school records and newspaper stories that my second cousin once removed was a champion footballer who won three ‘best and fairest’ player medals and had a Prussian  army captain for a grandfather, learning that one of my great grand aunts became the  single mother of two young girls quite unceremoniously when her husband was arrested for producing and passing forged £1.00 notes and deported to Noumea. 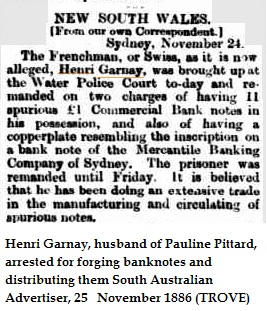 It seems possible that my paternal line is traceable back to Switzerland in 1200 AD, but investigating that is just too mind boggling given that I am challenged enough fleshing out the past four generations in Australia! With the help of a first and a second cousin and various databases, I have been able to piece together quite a lot of my family members’ lives and stories.  Now that I have ‘gone bush’ I can’t easily visit the record repositories, museums and cemeteries that are the haunt of ‘genies’ but it is amazing how much is available online and it is heart-warming how generous other family history buffs  and volunteers at local historical societies can be.  I am as excited now at the arrival of a package of photocopies of documents and pictures as I used to be at the arrival of bric-a-brac I had bought on eBay!


But I have to remark on one complication that hampers my research.  I kept my so-called maiden name i.e. the surname I was born with, both for ideological and practical reasons, when I married back in the 80s.  I had not been bitten by the genealogy bug back then and it never occurred to me that continuity of identity had implications beyond feminist principles and avoiding the mess of changing bank accounts, electoral roll listings etc.  It wasn’t until I saw Armandine Garnay disappear to be replaced by Mrs R. L. Thornber and Regina Louise Pittard morph first into Mrs Charles Norett, re-emerge temporarily as Mrs Regina Norett (widow), only to be subsumed by the moniker Mrs J. B. Wallis (one of three succeeding women to be known by that name) and then to surface briefly as Mrs R.L. Wallis (widow) in the last few years of her life, that I realised how difficult the custom of assuming one’s husband’s name makes family research.  Add to this non-standardised spelling, 'Noirette' for 'Norett' and 'Wallace' for 'Wallis', and it can take a lot of detective work and guesswork to track down female relatives.


Another challenge is what the papers considered newsworthy in past eras. Business ventures and sporting achievements often got a mention so I stumbled upon (male) entrepreneurs, cricketers and footballers in the family quite quickly.  Female golfers and bowls players occasionally made it into the papers’ columns but a single initial and surname are hard to verify as the particular ancestor you’re seeking.  Marriages, births and deaths, assuming the family had the price and presence of mind to post a notice, can be depended upon to an extent. The first two usually reveal the bride’s/mother’s former identity. I remember the first time I heard the term ‘nee’ referring to a woman’s surname prior to marriage. It was on the saucy sit com ‘George and Mildred’ when Mildred was referred to as Mildred Roper (nee Trembler). Boom tish!  Incidentally, the Newcastle region leads the pack in their enthusiasm for printing wedding photographs, their local papers, in my experience,  had by far the richest source of blurry black and white pictures of newly hitched couples back in the 1940s and 50s.


Unless they moved in exalted social circles (none of my forebears really did) or were conspicuously active in the Country Women’s Association (Armandine Thornber nee Garnay was forever demonstrating her spinning or judging at rural shows) not many women featured in the newspapers. Of course women who held  important positions as matrons or headmistresses got some coverage, but shopkeepers, seamstresses, laundresses and those discharging ‘home duties’ (the term the census  used)  like my lot, only featured in the paper if they took out a classified ad selling a pony or a sewing machine.  Nowadays the likes of the Trading Post online and Gumtree and the explosion of social media have made both ‘For Sale’ notices and wedding coverage in newspapers redundant, but they helped to bulk up copy until about the 1980s.


So large chunks of women’s lives were not revealed in the media and, to my frustration, my female antecedents go ‘off the radar’ for years at a time especially if they weren’t reproducing during that period. Like the veiled mothers in Victorian photographs you may sense their outlines behind their more prominent offspring. Later their attire at their progenies' weddings might attract a few words in a newspaper but not for them election as aldermen, retirement send offs or visits to court to recoup debts or declare bankruptcy.  Even the ratio of industrial accidents and driving offences is firmly weighted along gender lines. While male relatives have had trees fall on them at work, lost fingers on the production line, been pulled over for faulty headlights or charged with indecent language, I have only been able to trace one female in our tree being fined for driving under the influence and she is only a relative by marriage!


Thank goodness for Trove (the National Library’s collection database) I have discovered so much trawling through it.  Some of my ancestors got more than their 15 minutes of fame – if they served their country, opened a successful emporium or played a pretty classy game of football – but the women got disproportionate obscurity, some not even accorded their own ‘real’ names in their death notices.   My greatest satisfaction and ongoing quest is to talk to those family members still around today who can throw a light on the shadows they inhabit.
Posted by Alice at 11:41 PM