Spoiler alert: Contains details about the film 'A Single Man'.

I had to walk out of one of those swanky homeware places in Norton Street yesterday when the two 'children' behind the counter made dismissive comments about 'A Single Man'. They called the triumph of sensitivity and artistry I saw last Wednesday night 'boring'. I could start a tirade about short attention spans and being spoonfed ugly obviousness by the Hollywood machine here, but what's the point? A film that resonated so beautifully and totally for me didn't for them. We are different people at different points in our lives. Our tastes may never coincide. But I couldn't bear to hear the film maligned.

Despite subscribing, in principle, to the 'read the book before you see the film' philosophy mentioned in my last posting, I have not read Christopher Isherwood's novel. I hope to get around to it. However Tom Ford's film is a complete work of art in itself. The screenplay, performances, design, cinematography, the musical score all combine to create one of the most perfect experiences I have had in the cinema. 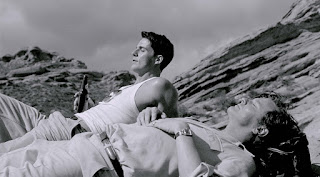 George and Jim on the beach in a flashback scene from 'A Single Man' - no Firthian nipple a la 'Genova' but infinitely more sensuality.
I saw it in the same theatre as 'Genova' and now that tawdry experience is purged. Where 'Genova's imagery was crass, unsubtle, insistent, 'A Single Man's is composed, yet fluid, raw, but painfully beautiful. Colin Firth plays an English-teaching academic in both films. In both films his life partner is killed in a tragic, freak road accident. In both films his rapport with a young student helps to lift him out of his grief. For a 'compare and contrast' exercise the parallels are obvious.

But, whatever the superficial similarities might be, for me, the films are poles apart in the authenticity of the feelings they express. Before I saw it I had been warned that 'Genova' was sad, upsetting. Before I saw it, I heard that 'A Single Man' was too self consciously styled to be fully affecting. I felt the opposite, that 'Genova' was gimmicky and shallow, the endless imagery of the girls walking down those menacing lane ways or of the older daughter experiencing libidinous oblivion riding pillion on that motorcycle were indulgent and voyeuristic. By contrast there is a lightness of touch in Ford's direction and Firth's performance in the other film. We are invited to experience, often through long held close ups, the nuances and complexities of each moment of George, the protagonist's unfolding day. Nothing is repeated or redundant. Everything is as spare and elegant as his suit and shirt.

The other great difference is the politics of these films. 'Genova's are hackneyed, the ghost of a lost mother both a comfort and a threat, European hedonism healing the straight laced pilgrims from the new world, the ungainly attempt in middle age of a woman to rekindle the Firth character's attraction towards her (though this too is occurs in 'A Single Man'!) The second film deals with something still fresh in cinema, the pain of exclusion experienced by an 'invisible' minority, gay men, in LA in the 1960s. Edmund White*, in 1992, called 'A Single Man' 'one of the first and best novels of the modern Gay Liberation movement'. It is quite a didactic film but its message is never emblazoned on a placard. It is alluded to in the classroom scene, depicted in the heart rending way George is firmly uninvited to the funeral of his lover of 16 years, explored in the wonderfully written encounters between George and Kenny, a student in his class, and between George and Carlos, the Spanish hustler whose beauty and charm so mesmerise George.

The aesthetics of the two films is another of many points of difference. The depiction of the actors in 'A Single Man' is not the generalised airbrushed flattery we are used to, it lays bare every pore of the skin, every blood vessel of the eye, it shows the allure and perfection of youth and the experience and vulnerability of middle age. The built environment of George's home and neighbourhood is similarly lingered over, and not just to showcase 1960s chic, but because Jim (George's dead partner) was an architect and Ford wants us to understand how the rooms they inhabited together say something about the intrinsic elegance, truth and subtlety of their relationship.

Ironically without this sensibility 'coming out' between the 1960s and now there would be no swanky homeware places like the one in Norton Street, Leichhardt to employ indifferent brats!

*"Pool in Rocks by the Sea: Isherwood and Bachardy." Artforum, February 1992. Reprinted in The Burning Library: Essays. Vintage, 1995
Posted by Alice at 8:20 PM

Alice, I saw A Single Man tonight and agree with you. It was beautiful. We weren't belted over the head with the messages and that was such a relief. It was beautiful, well paced and resonated here too.

So glad you enjoyed it as much as I did. It is destined to be my film of the year I think. Seeing 'The Last Station' at the weekend and hope it doesn't disappoint. Hard on the next film you see when you've been so impressed.