A picture paints a thousand words... Well, yes and no. Tim Burton's 'Alice In Wonderland' while visually rich and imaginative with a script of some worth, is not as intellectually tantalising or delighfully 'curious' as Charles Lutwidge Dodgson's original stories. But then little in supposed 'children's literature' (or film) is!

I must declare an interest, Alice In Wonderland and Through The Looking Glass are just about my favourite literary works and I have read both many times. They are quintessentially English, delightfully perverse, witty and irreverent and I ADORE (check out the title and signature image of this blog!) I would argue that they are almost un-adaptable. I loathe the 1960s Disney cartoon and a later American attempt which cast Whoopi Goldberg as the Cheshire Cat (pulllease!- give me the suave Stephen Fry any day!) Johnathon Miller made a Cabinet of Dr Caligari-esque version (also in the 60s) with the Peters Cook and Sellers that intrigues, then there's a Martin Wesley-Smith musical, snatches from which I've heard and thought very un-Lewis Carroll. Tim Burton has done probably the only sensible thing one can do and taken the original stories (and some only of the original characters) as a point of departure for a new story.

This new story throws Alice into a Jabberwocky slaying role (where has the 'beamish boy' gone?) and, as seems compulsory in American cinema, is at least partly a parable of good conquering evil with more than a nod to the Narnia finale. But thanks to a prodigious array of talent, exquisite art direction, faultless special effects and just enough Carroll-inspired vocab e.g.'you have lost much of your muchness' - the film charms. It also gets some marks for its second, not terribly subtle, theme of attaining self directed adult/womanhood which appropriately parallels the earlier Alice's journey from childhood to adolescence and for creating a decidedly bleak, Burton-esque, post Victorian W/Underland. 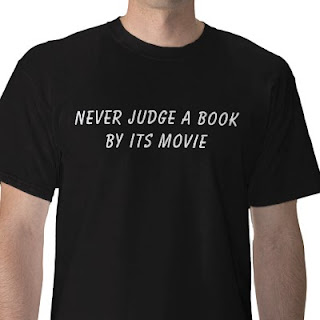 The topic of book to movie was tackled on Jennifer Byrne's 'not the first Tuesday book club' this week. There was passionate discussion amongst guests John Marsden, Ana Kokkinos, John Collee and Margaret Pomeranz all of whom held strong & divergent opinions. They and our book group are probably microcosms of the broader reading public on this divisive topic. One of our group members completely eschews ANY book adaptation. She will either read the book or see the film (never both) and don't get me started on Mr Darcy loyalties!

I think Margaret Pomeranz and I may have been separated at birth - I agreed with almost everything she said, including hating the novel Perfume. That was a book I believed I 'ought' to read and appreciate for years before I actually bought a copy. While it displayed huge technical cleverness, detailing the alchemy of scent sourcing and distillation and evoking every nuance of the protagonist's olfactory world, I found it cold, mechanical and consistently repellent. I've yet to see the film, which Ana Kokkinos called a 'magnificent failure', but I don't think I could dislike it more than I did the book.

The same logic may yet lead me to see the movie of The Road, another book I disliked. Its one redeeming quality (for me) amongst the quagmire of manipulative sentiment, hackneyed gender roles and bad science, was its descriptive language. Highly visual and cinematic already, I guess it was just crying out to be made into a film but suspect the armageddon, father and son bonding and roaming zombie themes might have influenced Hollywood's decision to adapt it just as much.

The film I really want to see next is 'A Single Man' (Colin is making up to me for 'Genova' - see earlier blog posting). From the trailer it looks as if he should definitely have won the best actor Oscar for his performance. That too is based on a book, Christopher Isherwood's 1964 semi-autobiographical novel of the same name. I wonder, as Jennifer Byrne's guests agreed (I think?) and my personal credo holds, I should try to read the book first? Obviously it will have to be a clandestine activity; now that it has succumbed to a celluloid interpretation it will not be one of our book group choices!
Posted by Alice at 7:42 PM

I'm envious that you are getting to see so many movies. *sigh*. I wanted to comment on your hatred of 'Perfume'. I can still remember the sensory overload I experienced while reading it, and it opened a door to an appreciation of flavour and scent in a new way for me. I also found it cold and mechanical, but felt this was in keeping with the subject matter and protagonist. I like this aspect of books: where the writing technique is another way of filling out the story and characters.

The reason it seems I have seen so many movies is that I am OLD, LD! I have actually been to the cinema exactly once in 2010. You're right that the technique was appropriate to the character and theme of 'Perfume' but I could not bring myself to enjoy the book, I kept asking myself 'why'? put such craft into creating such a repellant and un-illuminating work. I know 1000s disagree.

Looking forward to your review if A Single Man, Alice! Great blog!

I can't believe you hated The Road! It seems i loved it as much as you hated it. For me, it was poetry. Deep, profound and so moving. I cried my eyes out. I will absolutely be reading it again! I want to see the movie but i know it will be nothing like the book and will have to stop myself from comparing.

Don't you love that two people can read the same book and have such completely different reactions?

Yes. I'm sure it is partly when in your life you read a particular book but there are such variations in taste and opnion too - that is what makes a book group so stimulating!