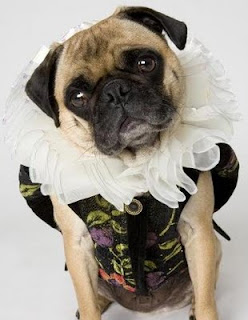 The canine bard in authentic Elizabethan garb
Debate has long existed about whether William Shakespeare is actually the author of the many plays (and presumably poems) attributed to him. It is generally asserted that a village boy who left school at 15 would not have had the vocabulary or the knowledge of the classics, the sciences and humanities that his canon displays. Rival candidates usually cited are Francis Bacon, Christopher Marlowe and Edward de Vere, 17th Earl of Oxford. Dead white males all! In 'A Room of One's Own' Virginia Woolfe posited a genius sister for Shakespeare, who perished in anonymity because of the circumstances an Elizabethan woman of letters would have faced. But no-one has gone beyond questioning the sexism of assuming Shakespeare was a man to consider whether he or she was human at all!

Now with the discovery in rural NSW of The First Bonio any doubt about where the foundation stone of the British literary tradition originated has vanished! This precious manuscript was found in 2004 lining an abandoned kennel in Gulargambone when the community embarked on the massive clean up that won it that year's Tidy Town award. It proves beyond a shadow of a doubt that 'Shakespeare's' works are by a dog!

All's Well That Smells Well
Julius Schnauzer
Muckbreath
Two Cattledogs of Verona
As You Lick It
Prince, Great Dane of Hamlet
Corgi Ole Anus
A Midsummer Night's Walkies
The Distempest
Measure for Muzzle
The Taming of the Shi-tszu
Love's Labrador Lost and
Richard the Turd

Only arrogant human plagiarism explains how they have been mis-attributed for so long! It's time to laud the doggy bard, Wilhelmina Wagtail, not to view her as 'a beast that wants discourse of reason' but to acknowledge her thusly:

What a piece of work is dog! How noble in reason!
How infinite in faculty! In form and moving how express and admirable.
In action how like a wolf. In apprehension how like a dog. A dab paw with the thesaurus.
The paragon of animals!
Posted by Alice at 8:24 PM

What about "Much Ado About Noses", "A Weimaraner's Tail" or "Othello, Mongrel of Venice"?

You are clearly a true Wagtail scholar to have uncovered these additional works!