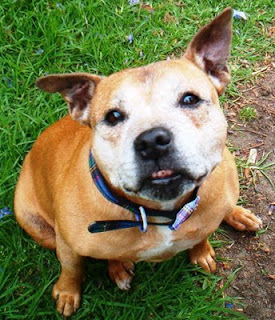 
From Brewer's Dictionary of Phrase & Fable:

To sleep off. To get rid of by sleep.

To sleep away. To pass away in sleep, to consume in sleeping; as, to sleep one's life away.

To sleep on a matter. To let a decision on it stand until tomorrow.

To put to sleep. Commonly used as a euphemism for painlessly putting to death pet animals.

We had our aged staffy, Cassie 'put to sleep' on Friday afternoon. That is she received a lethal overdose of anaesthetic and died swiftly and hopefully peacefully.

We are fortunate that we can exercise this judgement in relation to elderly, unwell dogs and cats. Anyone who has watched humans suffer the final stages of cancer would have at least considered the desirability of such an option.

There was no moral conundrum for us but that still didn't make it particularly easy. Cassie timed things well - her rapid decline occurred on the afternoon of the last day of the working week. We got home from the vet's surgery with her at about 5 pm so there was no digging in savage sunlight. The only hiccup was an unfortunately timed phone call from my employer hoping that everything was 'okay'. We buried her in the still twilight (luckily there were none of the wild winds that have characterised many of the last few days). Her plot is home to a fragrant boronia we bought at the nursery 5 days ago without this destination in mind. My green thumbed sister says boronias are notoriously hard to grow so it may not be her long term memorial shrub.

All in all not a bad death. We feel sad and drained and I have been doing quite a lot of 'sleeping it off' however endorphins from aquarobics and sympathetic hugs from the aqua women and from my dog walker/book group friends and reminiscing with the family about Cassie's traits and adventures have all helped. No 'anger' stage of grief with this one!

Sometimes I've read a poem or piece of prose or a song lyric when saying goodbye graveside to a pet (we've said a few goodbyes over 34 years) but Cass needs no other epitaph than this quote from my son's Facebook posting for that evening: