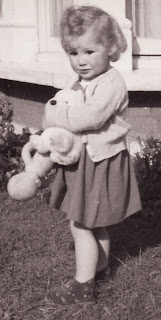 Just for a change, instead of talking about my pets, I’m going to talk about an important toy animal. Brumas is a toy polar bear cub I’ve had all my life. I’ve just dug out a picture of me (above) with him taken when I was about 3 (so around 1959). He must have been given to me at birth or soon after as Brumas toys would only have been on the market for a few years.

Created in 1949 to commemorate the birth, at Regents Park Zoo, of the first baby polar bear successfully reared in the , these toys were one of the earliest instances of a public institution merchandising its attractions. (Brumas holds the record for bringing the most visitors to the zoo in any one year of its existence, 3 million people!) Research reveals that Brumas shaped soaps were common Christmas presents in 1950 and that Brumas and Mum, Ivy featured on advertising posters for Fox's Glacier mints!

'Brumas' is a portmanteau word combining the names of two of her keepers, Bruce and Sam. The cub was initially misreported as male in the media. In those pre -feminist days even when the mistake was corrected (see Pathe News announcing her actual gender with a series of quaint anthropomorphic gags) no-one really took much notice, so my Brumas remained 'he'.


The zoo was a favourite haunt of mine so I may have been taken to see the real Brumas, I don't remember. It would have had to have been before I was 3 because by the time this photograph was taken the real Brumas was dead. She only lived until 1958.

My Brumas has endured partly because he has been loved and treasured and importantly because my husband was kind enough to have him restored at the Dolls' Hospital in Kingsgrove for my 40th birthday!

So cute! Love it!

Great other blogs, too, although some are over my head.